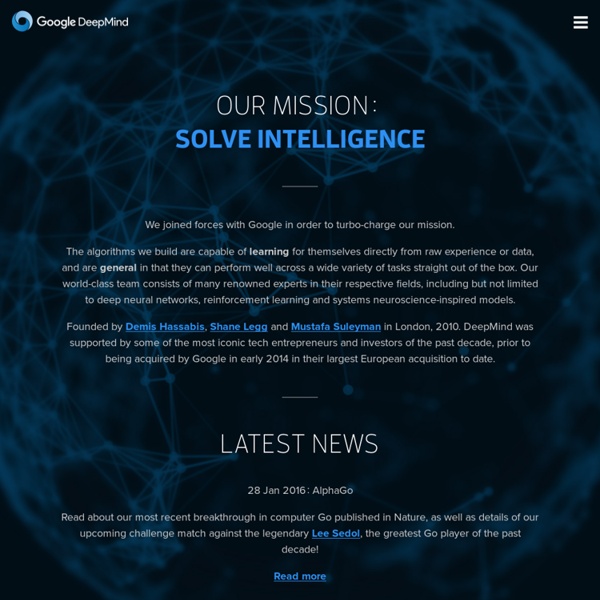 Sir Tim Berners-Lee: The marketing impact of artificial intelligence In this exclusive interview with Atifa Silk, the legendary computer scientist shares his vision of how thinking machines and a world covered in inexpensive pixels will change everything. Can machines think? It’s a question on Sir Tim Berners-Lee’s mind. A man clearly ahead of his time, the scientist, academic and inventor of the World Wide Web, is a visionary, whose innovative work has transformed businesses, governments and the world around us. Eccentric, yet immensely passionate about technology and the future of artificial intelligence (AI), Berners-Lee wants brands and consumers to prepare for what’s coming: a world in which AI touches almost every aspect of our lives. Ultimate Hacking Keyboard The keyboard for professionals. ● Increase your productivity by never leaving the home row. ● Improve your posture by typing on two, separate keyboard halves.

Robots master skills with ‘deep learning’ technique Robot learns to use hammer. What could go wrong? (credit: UC Berkeley) UC Berkeley researchers have developed new algorithms that enable robots to learn motor tasks by trial and error, using a process that more closely approximates the way humans learn. What you need to know about artificial intelligence, and the imminent robot future Do androids dream of electric sheep? That's unclear, but I know for sure that every kid dreams of intelligent, thinking robots -- certainly every kid who goes on to work at CNET, in any case. Today, my sci-fi-fuelled childhood fantasies of a bot with a "brain the size of a planet" are closer than ever to being realised. Artificial intelligence, or AI, the practice of making a machine behave in a smart way, is already changing our world and is, by my reckoning, the most fascinating field of technology right now.

Reusability: The Key to Making Human Life Multi-Planetary “If one can figure out how to effectively reuse rockets just like airplanes, the cost of access to space will be reduced by as much as a factor of a hundred. A fully reusable vehicle has never been done before. That really is the fundamental breakthrough needed to revolutionize access to space.” --Elon Musk China’s Tianhe-2 still the fastest supercomputer in the world at 33.86 petaflops per second The results are in, and they’re not a huge surprise: For the fifth consecutive time, China’s Tianhe-2 remains the fastest supercomputer in the world, with a Linpack benchmark performance of 33.86 petaflops, or quadrillions of floating-point calculations per second. That’s the word from the 45th edition of the twice-annual TOP500 list of the world’s most powerful supercomputers. Despite the expected result, some interesting bits of info come out of this latest roundup.

Autonomous Reproduction: Evolving Robots Are Here A study by the University of Cambridge examined the "evolution" of robots, where a mother robot created increasingly successful offspring based on natural selection. A mother robot designs and builds her own children, with each generation better suited to the environment than the last. By the final round, she has produced a generation that is over twice as fit as the first. The experiment, conducted by researchers at the University of Cambridge, aimed to test the customization and evolution potential capable by robots. Launch, Land, Repeat: Reusable Rocket Technology Taking Flight Reusable rockets aren't just a spaceflight pipe dream anymore. SpaceX performed another high-profile rocket reusability test Tuesday (April 14) during the launch of its Dragon cargo capsule toward the International Space Station. The first stage of the company's Falcon 9 rocket came back down to Earth and nearly pulled off a soft landing on an "autonomous spaceport drone ship" in the Atlantic Ocean.