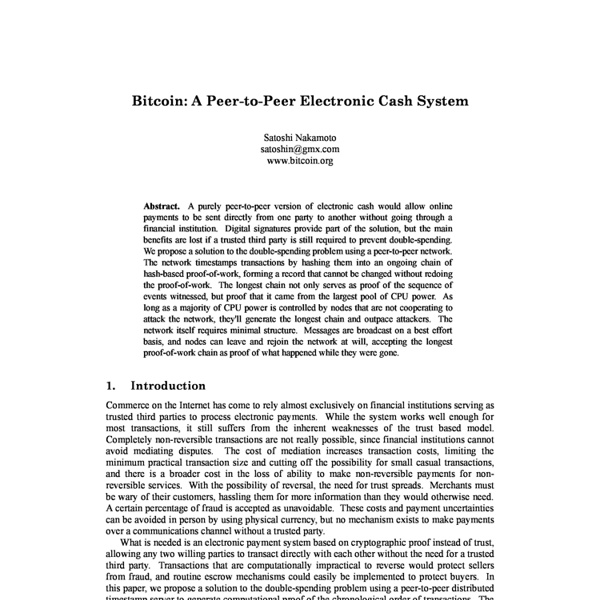 textes fondateurs bitcoinj bitcoin.it, Contracts A distributed contract is a method of using Bitcoin to form agreements with people via the block chain. Contracts don't make anything possible that was previously impossible, but rather, they allow you to solve common problems in a way that minimizes trust. Minimal trust often makes things more convenient by allowing human judgements to be taken out of the loop, thus allowing complete automation. By building low trust protocols that interact with Bitcoin, entirely new products can be created: Smart property is property that can be atomically traded and loaned via the block chain. This page also lists some smaller examples. Many of the ideas underlying Bitcoin contracts were first described by Nick Szabó in his seminal paper, Formalizing and Securing Relationships on Public Networks. A warning about the mempool transaction replacement mechanism In places this page refers to the ability to use the nSequence field for transaction mempool replacement. Theory SIGHASH_ALL: This is the default.

Oleg Andreev - Crypto-anarchy does not require anonymity Cypherpunk movement started as a mailing list in 1992. In 1993 Eric Hughes publishes a “A Cypherpunk’s Manifesto” [1]. In 1994 Timothy C. Here’s an excerpt from the FAQ: 2.3. In 1998 Wei Dai publishes a proposal of “b-money”, a practical way to enforce contractual agreements between anonymous actors [3]. I am fascinated by Tim May’s crypto-anarchy. In 2005 Nick Szabo publishes a proposal for “Bit gold” [4], a purely digital collectible based on a proof-of-work algorithm borrowing ideas from RPOW server (“Reusable proof of work”) by Hal Finney [5]. In late 2008 Satoshi Nakamoto publishes an overview of Bitcoin [7] and on January 3rd, 2009 releases the code and begins the blockchain. Bitcoin is an exact implementation of the system envisioned by Tim C. In practice, we cannot imagine living in full anonymity. I would argue, it’s far from it. Bitcoin raises the cost of many kinds of attacks, going far beyond protecting against central banks meddling with money supply.

Cryptex Bitcoin 2.0 Explained: Colored Coins Vs Mastercoin Vs Open Transactions Vs Protoshares While the entire world is beginning to learn about the power of the Bitcoin payment network, the real innovation behind this protocol is happening behind the scenes. There have been many different Bitcoin enthusiasts who have been talking about the holy grail of decentralized exchanges and using the Bitcoin protocol for more than just payments, and it seems that 2014 is going to be the year when we see these features finally get implemented into some real world applications. There are many different projects that are currently aiming to take Bitcoin to the next level, and it's likely that there won't be one clear winner when everything is said and done. Decentralizing the Internet Most people who learned about Bitcoin for the first time in 2013 look at it as nothing more than a currency, but the reality is that it's much more than that. Colored Coins One of the first Bitcoin 2.0 platforms that was put into development was Colored Coins. Mastercoin Open Transactions Protoshares

oleganza/CoreBitcoin TREZOR The Bitcoin Safe wikipedia, Satoshi Nakamoto Satoshi Nakamoto (中本 哲史[1], Nakamoto Satoshi?) is a person or group of persons who created the Bitcoin protocol and reference software, Bitcoin Core. In 2008, Nakamoto published a paper[2][3] on The Cryptography Mailing list at metzdowd.com[4] describing the Bitcoin digital currency. In 2009, he released the first Bitcoin software that launched the network and the first units of the Bitcoin currency, called bitcoins.[5][6] Nakamoto is said to have continued to contribute to his Bitcoin software release with other developers until contact with his team and the community gradually began to fade in mid-2010. Near this time, he handed over control of the source code repository and alert key functions of the software to Gavin Andresen.[7] Also around this same time, he handed over control of the Bitcoin.org domain and several other domains to various prominent members of the Bitcoin community. Nakamoto is believed to be in possession of roughly one million bitcoins. Identity[edit]