12 Ways To Calm The Overactive Mind 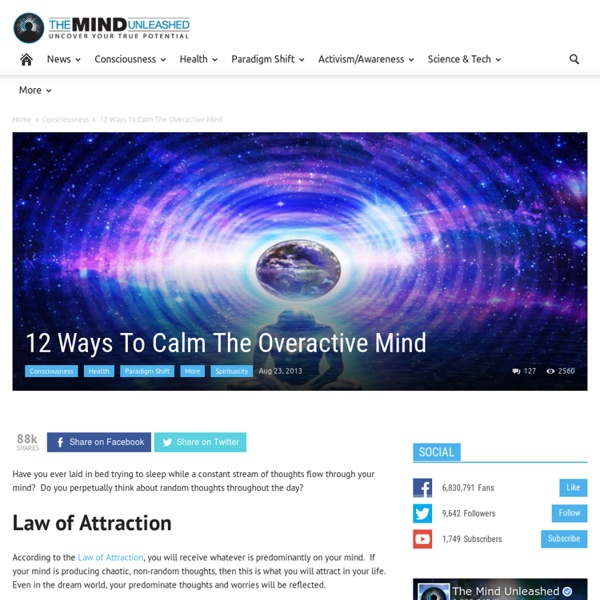 Have you ever laid in bed trying to sleep while a constant stream of thoughts flow through your mind? Do you perpetually think about random thoughts throughout the day? Law of Attraction According to the Law of Attraction, you will receive whatever is predominantly on your mind. If your mind is producing chaotic, non-random thoughts, then this is what you will attract in your life. Even in the dream world, your predominate thoughts and worries will be reflected. Hijacking the introverted mind We have been indoctrinated into a society that places ego and materialism above everything else, so many people will end up thinking about these things and how they are being perceived by others. It is estimated that approximately 75% of the population are extroverts and virtually all television programming is geared to reinforce the “all-about-me” persona while deterring people to look within for answers, which is they key trait of an introvert. Reinforced irrational thoughts Social anxiety disorders

7 Morning Hacks to Jumpstart Your Day I’ll be the first to admit that I’m really not a morning person. I’ve tried to get myself going in the early hours of the morning, but I’ve always been more of a night owl – my creative juices seem to flow better in the later hours. So I’d be the last person to suggest that you need to force yourself out of bed before your body and mind are really ready to do so. But when you do get up, you may find that you’re pressed for time and have fallen behind the rest of the crowd in what you need to get done during the day. A slow start to your day won’t help anyone, let alone you.

Just One Thing: Be at Peace with the Pain of Others Humans are an empathic, compassionate, and loving species, so it is natural to feel sad, worried, or fiery about the troubles and pain of other people. (And about those of cats and dogs and other animals, but I’ll focus on human beings here.) We're pleased to bring you another installment of Rick Hanson's Just One Thing (JOT) newsletter, which each week offers a simple practice designed to bring you more joy, more fulfilling relationships, and more peace of mind and heart. Long ago, the Buddha spoke of the “first dart” of unavoidable physical pain. Given our hardwired nature as social beings, when those we care about are threatened or suffer, there is another kind of first dart: unavoidable emotional pain. For example, if you heard about people who go to bed hungry—as a billion of us do each night—of course your heart would be moved.

High Nutrient/Low Calorie Foods When dieting you need to be able to rely on low calorie foods and high nutrient snacks to make it through the day. Strong protein and fiber content provides energy for any activity level. You’ll feel less hungry when nutritional needs are satisfied with healthy foods instead of sugary or salty snacks that keep you wanting more. The U.S. Department of Agriculture suggests increasing foods with high potassium, calcium, magnesium, fiber, and vitamins A, C and E in your diet. How To Stop Overthinking – 9 Simple Habits What is holding people back from the life that they truly want to live? I’d say that one very common and destructive thing is that they think too much. They overthink every little problem until it becomes bigger and scarier and it actually is.

Do You Feel Sexy? Your Answer Makes a Big Difference Lightwavemedia/Shutterstock In today’s beauty-dominated media, particularly for women, you might expect that women who feel bad about their bodies also feel less sexually satisfied. Feeling that they don’t measure up to cultural ideals, women who aren’t willow-thin should, we might anticipate, feel inadequate in the bedroom. Although obesity is linked to poorer health outcomes, normal or slightly overweight women who don’t fit the mold of the fashion model should have no reason to feel that there’s something wrong with them. Calorie restriction In humans the long-term health effects of moderate CR with sufficient nutrient are unknown.[3] Two main lifespan studies have been performed involving nonhuman primates (rhesus monkeys). One, begun in 1987 by the National Institute on Aging, published interim results in August 2012 indicating that CR confers health benefits in these animals, but did not demonstrate increased median lifespan; maximum lifespan data are not yet available, as the study is still ongoing.[4] A second study by the University of Wisconsin beginning in 1989 issued preliminary lifespan results in 2009,[1][5][6] and final results in 2014.[7] It found that CR primates were only 36.4% as likely to die from age-related causes when compared with control animals, and had only 56.2% the rate of death from any cause. Effects on humans[edit]

25 Life Changing Lessons to Learn from Buddha “If we could see the miracle of a single flower clearly, our whole life would change.” ~ Buddha There are so many beautiful, powerful and life changing lessons I have learned from studying Buddhism and from reading many of Buddha’s quotes. And today I want to share 25 of these beautiful lessons with you. Here are 25 Life Changing Lessons from Buddha: 1. Love heals all things. The Secret Powers of Middle Children Syda Productions/Shutterstock Katrin Schumann, co-author of The Secret Power of Middle Children answers some questions on her latest book: They are considered to be neglected, resentful, have no drive, have a negative outlook, feel like they don’t belong—in other words, they suffer from “Middle Child Syndrome.” A Stanford University study showed that middles are considered the most envious, least bold, and least talkative of all the birth orders.

Calorie-restricted diet may help keep the mind sharp A growing body of research links calorie-restriction to longevity, and now a new study suggests that eating less may help keep the mind sharper, too. The study in mice found that eating a low-calorie diet could reduce genetic changes linked to age-related cognitive and memory decline. Researchers led by Stephen Ginsberg, an associate professor of neuroscience at NYU Langone Medical Center and a research scientist at the Nathan Kline Institute for Psychiatric Research, focused their study on female mice, which, like humans, are more prone to dementia than males. The team gave food pellets to the rodents that were 30 percent lower in calories than what they fed to the control group. In particular, the mice ate fewer calories derived from carbohydrates.

Los 10 Mejores Herramientas Web Para Flipped Aulas While flipping the classroom is still one of the hottest trends in education, it’s got nothing on time-saving and downright useful apps and web tools. In an effort to provide a quick look at some of the best web tools for flipped classrooms, I thought it would be useful to poll the @Edudemic Twitter followers . Including the tweets, I also got at least 40 emails from friends, colleagues, and administrators from around the world. One thing stood out to me: there were a lot of repeats! Many folks who have tried the flipped classroom model or are currently deploying it have leveraged a lot of the same web tools. Nearly all are free and most are actually tools you’re probably already using.

Charles Bukowski’s Top 10 Tips For Living A Kick-Ass Life Looking for some pointers on how to live an awesome life? Take it from Charles Bukowski, an American author, poet, short story writer, and novelist who shared his unfiltered views and opinions with the world on everything from art to death. He was a renowned and prolific writer, often depicting the experiences of the downtrodden and depraved people of American urban life, and he provided plenty of great tips on how to spend your days. But don’t just take my word for it, soak up the wisdom with this valuable advice from some his most well-known quotes. 1.