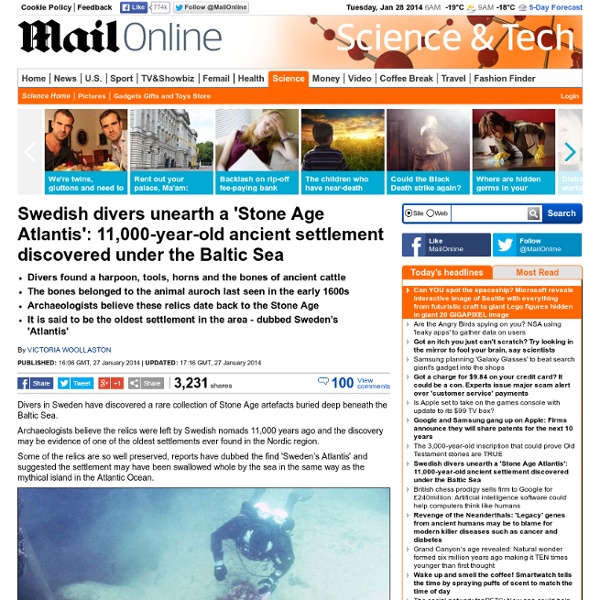 The Bucegi mountain secrets - Hidden From Humanity. Ancient tunnels reveal our true history This page contains excerpts of the discovery plus two years of my research finding confirmations throughout history... In the summer of 2003, in an unexplored area of the Bucegi mountains in Romania, an epochal discovery was found that would completely change the destiny of mankind. Section "I" contains excerpts from the book. Low Back Pain Exercises Exercises that stretch and strengthen the muscles of your abdomen and spine can help prevent back problems. Strong back and abdominal muscles help you keep good posture, with your spine in its correct position. If your muscles are tight, take a warm shower or bath before doing the exercises. Exercise on a rug or mat.

Enormous megaliths discovered in Siberia Click here to view the original image of 610x400px. By April HollowayHave enormous megaliths been discovered in Southern Siberia, or are they a rare product of nature?A series of incredible photographs have been released by Dr Valery Uvarov, Head of the Department of Palaeoscience, Palaeotechnology, and UFO Research of the National Security Academy of Russia, following an expedition to the mountains of Gornaya Shoria in Southern Siberia. The photographs appear to depict a set of enormous megaliths and Dr Uvarov is convinced they are man-made structures. Some of the stones display clear edges and angles. Dr. Robert Schoch and Alternative Human History E.I.R.S. has teamed up with Geologist and University Professor Dr. Robert Schoch in our research efforts of Alternative World History. Our true human history is slowly coming to discovery through the extensive researches of geologists and geophysicists like Robert Schoch. Evidence points to civilizations existing thousands of years beyond what our school books say they do.

Ancient Sumerians In Ecuador: The Father Crespi Mystery… In the Amazonian Ecuadorian region called Morona Santiago there is a very deep cavern, known in Spanish as Cueva de los Tayos (Cave of the Oilbirds). According to some researchers the true discoverer of the huge archaeological treasures of the Cueva de los Tayos was not the Hungarian Juan Moricz, but rather the Salesian priest Carlo Crespi (1891-1982), a native of Milan, Italy. Carlo Crespi, who arrived to the Amazonian Ecuador area of Cuenca in 1927, was able to win the trust of the natives Jibaro, and so they did deliver to him, over decades, hundreds of fabulous archaeological pieces dating back to an unknown time, many of them made of gold or golden, often masterfully carved with archaic hieroglyphs that, to date, no one has been able to decipher. From 1960 Crespi obtained from the Vatican the permission to open a museum in the city of Cuenca, where was located his Salesian mission.

Ancient City Found in India, Irradiated from Atomic Blast Radiation still so intense, the area is highly dangerous. A heavy layer of radioactive ash in Rajasthan, India, covers a three-square mile area, ten miles west of Jodhpur. Scientists are investigating the site, where a housing development was being built. For some time it has been established that there is a very high rate of birth defects and cancer in the area under construction. The levels of radiation there have registered so high on investigators' gauges that the Indian government has now cordoned off the region. Scientists have unearthed an ancient city where evidence shows an atomic blast dating back thousands of years, from 8,000 to 12,000 years, destroyed most of the buildings and probably a half-million people.

Yoga may work better for lower back pain than conventional treatments | Science Doing yoga is a more effective way for people with lower back pain to become more mobile than the treatments currently offered by GPs, according to new research. The study found that back pain sufferers recorded greater improvements in everyday physical tasks such as walking, bending down and getting dressed if they did weekly yoga sessions. Participants who had practised yoga reported enhanced function compared with those receiving standard care, even nine months after the yoga classes had finished.

Have enormous megaliths been discovered in Southern Siberia, or are they a rare product of nature? A series of incredible photographs have been released by Dr Valery Uvarov, Head of the Department of Palaeoscience, Palaeotechnology, and UFO Research of the National Security Academy of Russia, following an expedition to the mountains of Gornaya Shoria in Southern Siberia. The photographs appear to depict a set of enormous megaliths and Dr Uvarov is convinced they are man-made structures. Others, however, have argued that they are simple a rare example of the power and wonder of Mother Nature. An expedition headed by Georgy Sidorov was undertaken a team of 19 researchers following information about the existence of a large number of strange megalithic objects on Gornaya Shoria, a mountain reaching 1,100 metres above sea level, and situated in a remote part of Russia which had previously been blocked off by checkpoints during the era of the Soviet Union. The site of the ‘megalith’ stone blocks.

The temple complex of Raqchi Having been in Peru for a couple of weeks and spending most of our time amongst ancient Inca ruins I feel like this blog has gotten a bit too archaeological. However, on our way from Cusco to Puno we stopped off at a quite different but equally wonderful set of Inca ruins in Raqchi. I guess that is the thing about the Incas, they constructed an amazing array of towns, forts and ceremonial centres in little more than a century of empire building and they are everywhere you go in Peru.

Oedipus In the most well-known version of the myth, Oedipus was born to King Laius and Queen Jocasta. Laius wished to thwart a prophecy, so left him to die on a mountainside. However, the baby was found by shepherds and raised by King Polybus and Queen Merope as their own. Oedipus learned from the oracle at Delphi of the prophecy that he would end up killing his father and marrying his mother but, unaware of his true parentage, believed he was fated to murder Polybus and marry Merope, so left for Thebes. On his way he met an older man and quarrelled, and Oedipus killed the stranger. Continuing on to Thebes, he found that the king of the city (Laius) had been recently killed, and that the city was at the mercy of the Sphinx.