What 5 Things can You Do to Change the System? 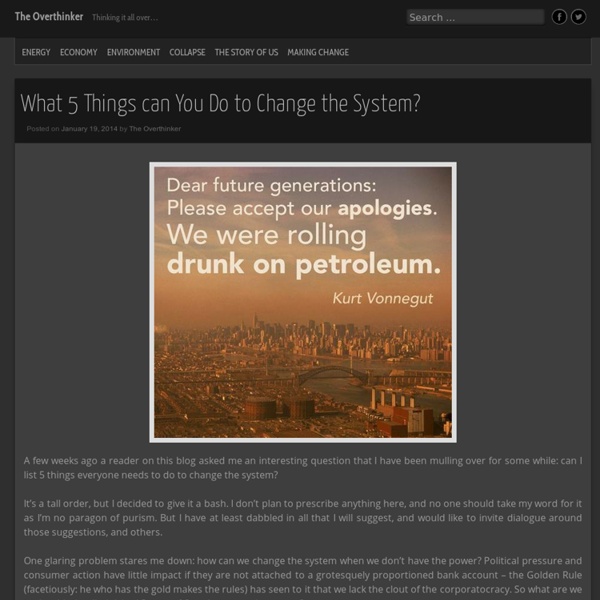 A few weeks ago a reader on this blog asked me an interesting question that I have been mulling over for some while: can I list 5 things everyone needs to do to change the system? It’s a tall order, but I decided to give it a bash. I don’t plan to prescribe anything here, and no one should take my word for it as I’m no paragon of purism. But I have at least dabbled in all that I will suggest, and would like to invite dialogue around those suggestions, and others. One glaring problem stares me down: how can we change the system when we don’t have the power? I figured my response should not just be things everyone should do, but things everyone can do – at least to some extent – and can scale up. I don’t think in those mechanistic, reductionist terms whereby every problem can be pared down to its constituent parts, and each part can be tackled separately so that the whole picture, when you put it back together again, looks rosy. 1. This comes in a series of steps. 2. 3. 4. 5. Related:  alt living

GMO, yeah? 5 surprises from an otherwise boring look at genetically modified crops Researchers at the USDA’s Economic Research Service have stepped back to look at the effect of genetically engineered crops since they were introduced in the U.S. It’s a pretty dry and unsurprising document, but when read carefully a few interesting things jump out. Here’s five. 1. There have been thousands and thousands a field trials, which have translated to just a handful of different traits. Click to embiggen. 2. Herbicide-tolerant soybeans grow on more than 90 percent of the soy acres in the U.S. The fact that several researchers found no significant differences between the net returns of adopters and nonadopters of HT crops (particularly HT soybeans) despite the rapid adoption of these crops suggests that many adopters may derive nonmonetary benefits from HT adoption. In addition, farmers pay less for specialized herbicides and for the diesel needed to run a weed-busting cultivator. 3. That’s among both farmers who used GE insect-resistant crops and those who didn’t. Wow. 4. 5.

Earth Sheltered Earth Sheltered Homes "Another type of building is emerging: one that actually heals the scars of its own construction. It conserves rainwater and fuel and it provides a habitat for creatures other than the human one. Maybe it will catch on, maybe it won't. The earth sheltered house uses the ground as insulating blanket which effectively protects it from temperature extremes, wind, rain and extreme weather events. Fifteen feet below ground the soil maintains a fairly constant temperature equal to the annual average temperature of the area's surface air. There are two types of earth sheltered building. Honingham Earth Sheltered Social Housing. Looks like vertical placed logs are helping to support the berm on the right. Earth sheltered home with conventional facade. Earth sheltered home, as above. The facade may accommodate any architectural styling of the home owners choosing. An award winning earth shelter dwelling by Cam Architects. Side wall of above Sedum House: camarchitects.co.uk

About | WikiHouse Open Design WikiHouse is a commons where many companies work together to develop the best, most sustainable building systems ever designed, which are then freely shared for anyone to build upon and improve. Share global, print local The products they design with it are manufactured through the world's biggest factory. A distributed network of local workshops using tools such as 3D printers and CNC machines. Within the rules of the system, the design can be endlessly customised, allowing every house to respond to its user, site & context.

This new startup is doing hydropower right The Amtrak trip north along the Hudson River from New York City is one of the most stunning train journeys in the U.S. You roll along the river’s east side looking out at dramatic cliffs and lush hills across the water. Near the train tracks themselves, you get the full spectrum of a Rust Belt riverfront’s uses: active and abandoned industrial sites, new loft-style apartment buildings that capitalize on the views, parks and boat launches. The most dramatic building, by far, is the vacant former power plant in Yonkers, N.Y.: a massive, Romanesque Revival brick edifice with two giant smokestacks. An hour and a half further north, in the bucolic town of Hudson, N.Y., you can get a glimpse of a potential revival for riverfront energy generation. The hydropower plant on Kinderhook Creek, a Hudson River inlet, doesn’t look like a power plant at all. The company that owns Chittenden Falls Hydroelectric Project, Gravity Renewables, is a new startup out of Boulder, Colo.

Aluminum-clad Airship prefab is a durable, off-grid tiny home (Video) Built using aluminum, stainless steel and wood, this modular prefab is designed to be easily assembled and disassembled. Prefabricated buildings have gained mainstream acceptance in recent years, owing to the relative ease of assembly and reduced construction times. But there can be drawbacks: the process of dismantling them can result in damage to the structure, in addition to materials like wood degrading over a period of time. Those are some of the reasons why Scottish firm Roderick James Architects LLP created the Airship 002, an aluminum and stainless steel prefab that won't rot or rust, is easily disassembled without damage, and can go off-grid as a tiny home, office, or studio, potentially placed in remote areas, or on city rooftops or riverside lots. © Nigel Rigden Seen here, this Airship 002 can accommodate two to four people, and includes a sleeping area, kitchen, bathroom and a workspace and lounge with full views out of the glass windows on either end.