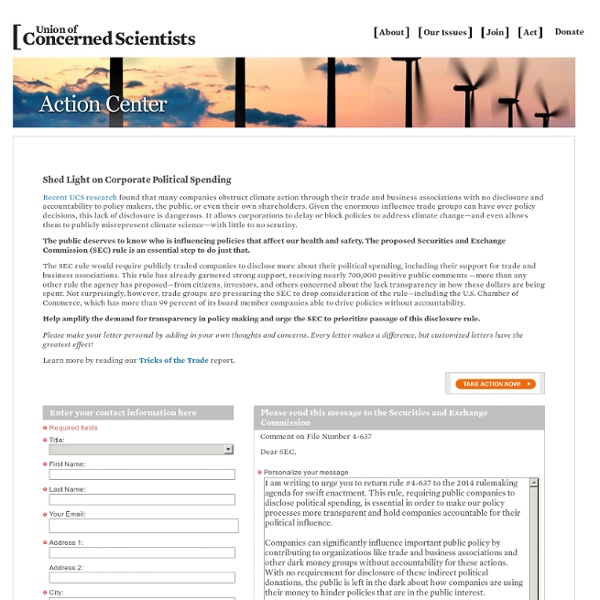 Union of Concerned Scientists Skip to main content Shine a Light on Corporate Political Spending Recent UCS research found that many companies obstruct climate action through their trade and business associations with no disclosure and accountability to policy makers, the public, or even their own shareholders. Given the enormous influence trade groups can have over policy decisions, this lack of disclosure is dangerous. It allows corporations to delay or block policies to address climate change—and even allows them to publicly misrepresent climate science—with little to no scrutiny. The public deserves to know who is influencing policies that affect our health and safety. The SEC rule would require publicly traded companies to disclose more about their political spending, including their support for trade and business associations. Help amplify the demand for transparency in policy making and urge the SEC to prioritize passage of this disclosure rule. Related:  4 Multiplicities • Government Actions

DESERTEC Foundation: Start Plastic Trash Challenge » Challenge: Show Us Your (Plastic) Trash! As you know, I’ve been collecting and tallying my own plastic trash since 2007. The experience has been educational for me, and I hope, for readers of My Plastic-free Life. I’ll keep doing it. But now it’s your turn. 1.) Collect all of your own plastic waste, both recyclable and non, for a minimum of one week. 2.) 3.) 4.) 5.) 6.) 7.) 8.) 9.) 10.) After you have completed the exercise, please complete the following form. Your tally should appear on the site within 3 days of sending your form since I post them manually. Questions?

Timeline: Legal Harassment of Climate Scientist Michael Mann Starting in April 2010, climate scientist Michael Mann has been subjected to a campaign of harassment, first by Virginia Attorney General Ken Cuccinelli, who has filed subpoenas demanding that the University of Virginia produce documents related to Mann’s time there, and later by the American Tradition Institute (ATI), a free-market think tank, which has sought identical materials through a Freedom of Information Act (FOIA) request. UCS has assembled the following timeline of events, editorial comments and statements from scientists, academics and other groups related to these attacks. June 19, 2013 The Superior Court of the District of Columbia holds a hearing on Michael Mann’s lawsuit against the National Review and Competitive Enterprise Institute. Each of the parties has filed their motions, exhibits and responses. October 23Michael Mann sues National Review and the Competitive Enterprise Institute over their statements. April 21UVA President Teresa A.

10 foreign language films to look out for These films have been offici­ally submit­ted for consid­eratio­n at the 86th Academ­y Awards . Of course, we’re rooting for our very own Zinda Bhaag! PHOTOS: FILE The submission list for the 86th Annual Academy Awards’ foreign-language category is slowly becoming longer, with over 50 countries selecting films so far. The October 1 deadline looms close Last year, a record 71 countries submitted films for consideration in the end. According to Indiewire, nine finalists will be shortlisted in mid-January, with the final five nominees to be announced on January 16, 2014. 1 Saudi Arabia — Wadjda Directed by Haifaa al-Mansour, Wadjda is the story of an 11-year-old Saudi girl living in Riyadh, who dreams of owning a green bicycle that she sees in a store every day on her way to school. 2 Chile — Gloria Gloria, a 58-year-old divorcée, has no desire to spend her days and nights alone. 3 Canada — Gabrielle 4 France — Renoir 5 Australia — The Rocket 6 Belgium — The Broken Circle Breakdown

Energy bill expected to favour nuclear and gas over renewables | Environment The energy bill is likely to favour fossil-fuel sources like gas, for which power stations can be built quickly and cheaply. Photograph: Chris Ratcliffe/Getty Images A dash for gas, a major fillip for nuclear power and blows to renewable energy – these are widely expected to be the contents of the government's much-anticipated draft energy bill, the main contents of which will be outlined by ministers in the afternoon. The nuclear industry is expected to be one of the big winners, with a set of policies designed to favour low-carbon power – which will, controversially, include atomic energy as well as renewable sources such as wind and solar. But renewable companies are concerned that they will lose out, because the current system of subsidies will be replaced with a complex new system of support that could favour big companies over their smaller rivals. This new system – known as contracts for difference – would allow companies to sign long-term contracts to supply electricity.

Miswak is Nature’s Twiggy Toothbrush Ever brush your teeth with a stick from a tree? This brother shows how it’s done Twigs for oral hygiene may seem like a curious idea, better suited for the holistic type than today’s modern lifestyle. However, before the advent of the ubiquitous plastic toothbrush, miswak, a natural alternative made from the Salvadora persica tree was the traditional way for cleansing teeth. For centuries miswak was known to be affective against tooth caries yet scientific research has only recently validated this age-old tradition. Miswak has been found to inhibit bacterial growth and retard the buildup of plaque, helping to improve oral health and freshen the breath. A research group from Sweden concluded that miswak is “as effective as toothbrushing for reducing plaque and gingivitis, and that the antimicrobial effect of S. persica is beneficial for prevention and treatment of periodontal disease.” This toothbrush is natural, biodegradable and with proven ability to reduce tooth decay.

Poultry Plant at the Heart of a Salmonella Outbreak Won't Have to Close - Abby Ohlheiser U.S. Department of Agriculture lifted a shutdown threat against California-Based Foster Farms on Thursday, after the company demonstrated improved conditions following a salmonella outbreak linked to three of its plants. The outbreak has sickened 278 people in 17 states since March, mostly confined to the west coast, is particularly resistant to antibiotics. 42 percent of those infected have been hospitalized — an unusually high percentage. Foster Farms had to meet a Thursday deadline to show improvement after receiving a letter from the USDA on Monday, warning the company that the sanitary conditions at its plant "could pose a serious ongoing threat to public health." In case you're not clear on what salmonella is, the Associated Press helpfully explains: Salmonella can contaminate meat during slaughter and processing and is especially common in raw chicken. Despite this, Foster Farms has not recalled the chicken connected to the ongoing infection — nor is it required to by law.

Dreams When the sun is set and the stars decorate the heavens, part of our soul leaves our body. Even if we remain awake, part of the soul still departs, which is one reason why we begin to feel more tired and drained as night unfolds. During actual sleep, the Zohar explains that 59 of the 60 parts of our soul leave our bodies, leaving only 1/60 to sustain us physically. When the body is in slumber, the chains of physical existence are suddenly broken. The soul is now free to ascend to a high place in the spiritual realm where it receives nourishment and information. Why the need for a recharge? During our "metaphysical tune-up," the soul is in a realm beyond time and space. Thus, in addition to getting a recharge, the soul oftentimes catches sight of events that are coming our way, both positive and negative. These glimpses are then filtered down to the body, where they take the form of dreams. Most of our dreams are a combo-plate special. Don't panic just yet.

How Humans Helped the Earth in 2010: Slide Show Ridding the Earth of Plastic From boom to bust, the reputation of plastics since World War II has gone from revolutionary dream invention to environmental nightmare. Degradable plastics break down into smaller pieces, leaching chemicals such as bisphenol A (BPA) into the water. Pieces of plastic are often mistaken for food among marine and desert animals alike -- with lethal consequences. Cutting back on the pervasive use of plastics in society is practically impossible, but helping to improve biodegradability, identifying new alternative materials, researching the ocean’s plastic-laden gyres, recycling plastic in new ways, and banning the use of plastic bags shows that in 2010 humans took the problem of plastic to the bank. In Agra, India, home of the Taj Mahal, plastic bags and bottles blocked drains during the monsoon season.

Outbreak of Salmonella from Foster Farms Chicken Sickens Nearly 300 and Hospitalizes 42 Percent Shutdown Puts Americans at Risk as Government Struggles to Respond October 8, 2013 An outbreak of Salmonella that has sickened nearly 300 people in 18 states is testing the federal government’s ability to respond, as key food safety personnel at the U.S. Department of Agriculture and key disease-surveillance scientists at the Centers for Disease Control and Prevention are not at their posts due to the government shutdown. The illnesses are linked to chicken from three Foster Farms facilities in California. “The number of people we know to be ill is just the tip of the iceberg,” said CSPI food safety director Caroline Smith DeWaal. In 2011, CSPI urged the USDA to declare antibiotic-resistant strains of Salmonella in ground meat and poultry, including the antibiotic-resistant Salmonella Heidelberg identified in this outbreak, as adulterants under federal law.

Was Content Curation born in a French Hospital 95 Years Ago? America joined World War I in April, 1917. With tensions building since 1915, President Wilson finally determined that American interests and lives, increasingly threatened by unrestricted submarine warfare on the part of Germans, required military action. War was declared on Germany, and within a few days America joined its allies in the struggle. However, it would be several months before sufficient troop strength could be mobilized. By March of 1918, only 318,000 Americans had arrived in France, and they were severely overmatched at first. At the same time, Germany was winning their war against Russia to their East. So in the early months of 1918, more and more Americans were shipping out to Europe. Ludendorff's attacks were swift and actually quite successful, initially. It was during this time that a young man from St. As it turns out, DeWitt Wallace had some experience reading and editing magazines. Once discharged, Wallace retuned to St. Sources: