Carol Read: The secret of working with children 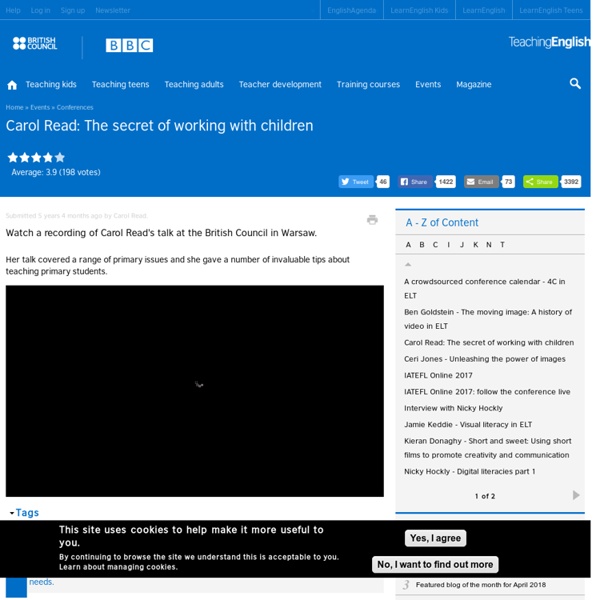 How can young children best learn languages? The British Council's Tracey Chapelton explains how parents of young children can lay the foundations for success. Children's brains are highly active Your child is unique, but what all children have in common is natural curiosity and an innate ability to learn. Kuhl states that babies and young children are geniuses at acquiring a second language. By exposing children to other languages at an early age, you are giving them the opportunity to tap into their natural ability to hear and distinguish the sounds of other languages, and their capacity to make sense of what they are hearing. Children make language-learning look easy Communication is something that children do to help them achieve something else, and they are blissfully unaware of the enormous amount of learning taking place. Children's emotional environment is important for learning In your child’s early years, the emotional environment is just as important as the physical environment. How can we lay the foundations for success?

The child as a learner 2 In this second part we will look at techniques to help develop their language and how to deal with errors. Involving the whole child Tips to parents Helping children with vocabulary Dealing with mistakes Top ten requests for parents Conclusion Involving the whole child Children have highly inquisitive minds and enjoy learning through play and using their imagination by observing and copying, doing things, watching and listening. Children also learn a lot of their first language by physically responding to their parents' instructions in real and meaningful contexts. The parent says, "Look at that dog" or "Give me the ball" and the child does so. These interactions between parent and child always have a clear reason for the communication. Tips to parents Parents can help by providing a rich learning environment and placing learning in context. Create an 'English Corner' by providing materials in English at home such as comics and books, cable TV and Internet (with parental guidance!)

6 Types of Play: How Children's Play Becomes More Social Play is a serious business. The pioneering developmental psychologist Lev Vygotsky thought that, in the preschool years, play is the leading source of development. Through play children learn and practice many basic social skills. They develop a sense of self, learn to interact with other children, how to make friends, how to lie and how to role-play. The classic study of how play develops in children was carried out by Mildred Parten in the late 1920s at the Institute of Child Development in Minnesota. She closely observed children between the ages of 2 and 5 years and categorised the types of play. Parten collected data by systematically sampling the children’s behaviour. The thing to notice is that the first four types of play don’t involve much interaction with others, while the last two do. Unoccupied play: the child is relatively stationary and appears to be performing random movements with no apparent purpose. » This is part of a series on 10 crucial child psychology studies. Reference

The child as a learner When to start language learning What stops children from learning How children learn languages Getting parents involved Get to know how your children learn When to start language learning Most experts believe that when a child is introduced to a second language at an early age their chances of becoming more proficient in the target language will be higher. However, it is not necessarily true to say "the earlier the better". It is suggested that the most efficient time to learn another language is between 6 and 13. However, children who learn in pre-to-early teens often catch up very quickly with children who learn from an earlier age. Also this does not mean that languages cannot be learnt later in life. Whatever the age, when children learn a second language they develop skills that will help to create opportunities in their future. What stops children from learning Reading the list above, you may be surprised at the number of items that remind you of traditional educational practices.

ESL Jeopardy: How to play this staple of the TEFL classroom - ESL Jeopardy is a version of the popular board game. It’s a fun and easy to play quiz game, and it’s great for reviewing vocabulary and certain grammar forms. It ranks alongside Taboo as one of the most played games in the TEFL classroom. It’s a great way to round off the week or to save for the last day of the course. You will need five separate categories of questions and for each category five or six questions ranging in difficulty from easy ($100) to difficult ($600). First, draw the Jeopardy grid on the board as in the above diagram. See below, for several sets of pre-written Jeopardy questions which you can use to play this game. Split students into teams of three or four, with two or three teams being optimal. The first team starts and chooses a category and an amount, depending on how confident they are in being able to answer the question. If the team answers incorrectly, the square stays open and another team or the same team can attempt to answer it in a later round. Related

How Children Learn to Talk Have you ever wondered how children learn to talk? Many people, when asked that question, respond that they do it by imitating. This is at least partially true. Without imitation, we couldn't account for the fact that children in Texas usually learn Texan English, children in Paris usually learn Parisian French, and not vice versa. But imitation as an answer doesn't take us very far. For one thing, children routinely say things they've never heard: "Mommy, come quick—Waldo swallowed a frog!" At this point some would amend their position to say that children don't imitate others sentence by sentence. At any given point in development, a child's speech more closely resembles the speech of other children at the same stage of development than it does the speech of adults in the child's environment—even if there are not other children around. What do children do as they learn to talk? Imagine that you are in a kitchen with a two-year-old and his mother. Child: Want other one spoon, Daddy.