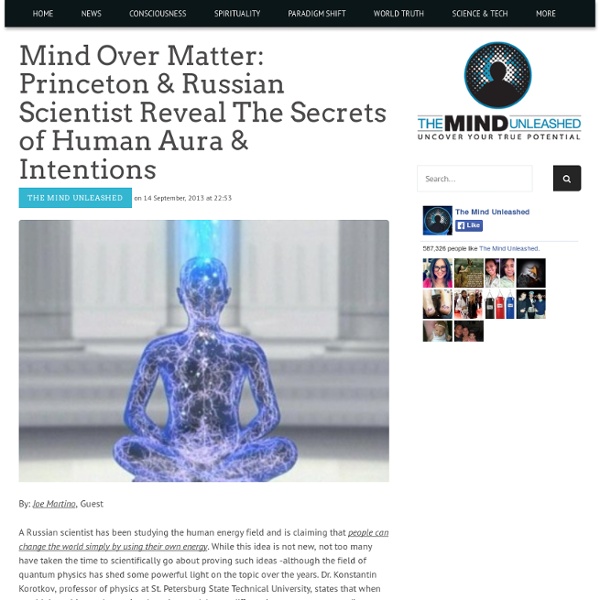 A Russian scientist has been studying the human energy field and is claiming that people can change the world simply by using their own energy. While this idea is not new, not too many have taken the time to scientifically go about proving such ideas -although the field of quantum physics has shed some powerful light on the topic over the years. Dr. Konstantin Korotkov, professor of physics at St. “We are developing the idea that our consciousness is part of the material world and that with our consciousness we can directly influence our world,” said Dr. We cannot see energy very easily with the human eye and thus the world of unseen energy can be difficult for the mind to grasp without scientific measurements to verify what is taking place. Dr. A project that initially started when a student was curious to study the effects of the human mind and intention on the surrounding environment, turned into a rigorous testing lab where Dr. Article reference: Related:  perceptions and reality

The Power of Words: How Words Affect Your Energy Image credit: flickr.com/photos/21546823@N02/2475149596 Words are not just elements of speech or writing, because they can be used to affect how energy travel through space. When spoken out loud, words transform into vibrations that can be used to direct energy. This is one of the first steps to creating magic effects. Most people will laugh at the idea of magic being real, but if only they knew what magic really is, they would not be laughing. The Controllers who pull the strings of politicians are well aware of how magic works. What is the definition of magic? The word magic comes from Old French magique, Latin magicus, and Greek magikos. Magic has a strong relationship with magnetic and electrical energy. The most powerful thing in the Universe is energy. The art of magic is often practiced along with certain words and sacred geometries. Sound is able to direct energy because it contains certain frequency patterns that attract energy to flow in a controllable manner. The power of words

water meditation concepts kap 1 WW3 - Difference Between Zionism and Judaism It must be stated explicitly that not all Jews are Zionists, and not all Zionists are Jews. There is a clear distinction, and I have tried to summarize my understanding of the important difference, together with links for further reading. I am neither a Jew, nor a Zionist, and my interpretation is no doubt faulty, but is offered here purely as background to explain how the rest of the site is influenced by my thinking. Who is a Jew? Is there a Jewish nation? The Jewish nation is different from all other nations as it does not depend for its existence on geographical boundaries, on secular sovereignty or on an army or air force. What is Zionism? A former president of the World Zionist Organization has stated explicitly that a Zionist owes unqualified loyalty to the Zionist state and that, in the case of a conflict, the first loyalty of a Zionist must be to the Zionist state. It takes a lot of courage to be opposed to Zionism today. I am unapologetically anti-Zionist. Controversy of Zion

Water Practice standing prt 1 kap 1 9 Mind-Bending Epiphanies That Turned My World Upside-Down Over the years I’ve learned dozens of little tricks and insights for making life more fulfilling. They’ve added up to a significant improvement in the ease and quality of my day-to-day life. But the major breakthroughs have come from a handful of insights that completely rocked my world and redefined reality forever. The world now seems to be a completely different one than the one I lived in about ten years ago, when I started looking into the mechanics of quality of life. Maybe you’ve had some of the same insights. 1. The first time I heard somebody say that — in the opening chapter of The Power of Now — I didn’t like the sound of it one bit. I see quite clearly now that life is nothing but passing experiences, and my thoughts are just one more category of things I experience. If you can observe your thoughts just like you can observe other objects, who’s doing the observing? 2. Of course! 3. 4. 5. Yikes. 6. This discovery was a complete 180 from my old understanding of emotions. 7.

WATER Practice concepts + wobble board KAP 1 New Study Reveals the Nature of God in Near-Death Experiences – The Search For Life After Death Source. Krishna. All-That-Is. Allah. The Great Spirit. Supreme Being. God. Today, when the western world refers to God, it usually represents the monotheistic God of the Abrahamic religions of Christianity, Islam, and Judaism. The wrath of God is a prominent theme of the Abrahamic vision of his character and each of the three religions have various ways of dealing with it. The God of Abraham could be merciful as well; provided that all of the conditions and expectations for behavior were met. There are many problems with characterizing God in this way. The question of why a supposedly merciful God allows evil and suffering is one that theology has struggled with since antiquity, and it is the major problem of characterizing God as a human-like being with human-like feelings, grudges, moods, and conditional love. But what if religion has God all wrong? Redefining God Dr. Some of the research questions that are addressed in ‘God and the Afterlife’ are as follows: Research Methods Dr. Dr.

Chakra From an 1899 Yoga manuscript in the Braj Bhasa language. Their name derives from the Sanskrit word for "wheel" or "turning", but in the yogic context a better translation of the word is 'vortex or whirlpool'.[1][note 1] The concept of chakra features in tantric and yogic traditions of Hinduism and Buddhism. Etymology[edit] Sanskrit chakra derives from the Proto-Indo-European *kʷekʷlos; its cognates include Greek kuklos, Lithuanian kaklas, Tocharian B kokale, and English "wheel," as well as "circle" and "cycle".[2] M. "Circle," used in a variety of senses, symbolising endless rotation of shakti.A circle of people. The linguist Jorma Koivulehto wrote (2001) of the annual Finnish Kekri celebration, having borrowed the word from early Indo-Aryan Languages.[5] History[edit] Characteristics[edit] The texts and teachings present different numbers of chakras. "In fact, there is no "standard" system of the chakras. The following features are common: Use in religious traditions[edit] Hindu Tantra[edit]