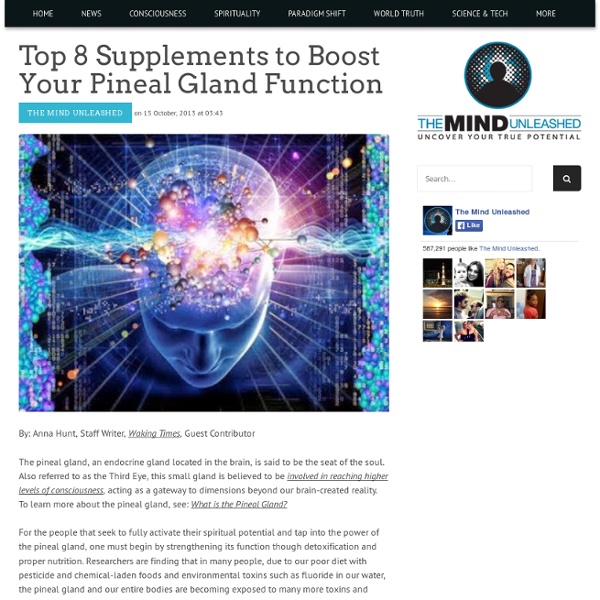 By: Anna Hunt, Staff Writer, Waking Times, Guest Contributor The pineal gland, an endocrine gland located in the brain, is said to be the seat of the soul. Also referred to as the Third Eye, this small gland is believed to be involved in reaching higher levels of consciousness, acting as a gateway to dimensions beyond our brain-created reality. To learn more about the pineal gland, see: What is the Pineal Gland? For the people that seek to fully activate their spiritual potential and tap into the power of the pineal gland, one must begin by strengthening its function though detoxification and proper nutrition. Below is a list, in no particular order, of 8 supplements that will boost your pineal gland function, help in its decalcification, and support you on your journey of personal and spiritual cultivation. 1. The pineal gland already produces the hormone melatonin, which affects the body’s circadian rhythms of waking and sleeping. Recommended products: NOW Foods Melatonin 5mg Vcaps 2.

Pineal Gland's Third Eye: One Of The Biggest Cover-ups in Human History The pineal gland (also called the pineal body, epiphysis cerebri, epiphysis or the “third eye”) is a small endocrine gland in the vertebrate brain. It produces the serotonin derivative melatonin, a hormone that affects the modulation of wake/sleep patterns and seasonal functions. Its shape resembles a tiny pine cone (hence its name), and it is located near the center of the brain, between the two hemispheres, tucked in a groove where the two rounded thalamic bodies join. Every human being’s Pineal Gland or the Third Eye can be activated to spiritual world frequencies and enables you to have the sense of all knowing, godlike euphoria and oneness all around you. A pineal gland once tuned into to proper frequencies with help of meditation, yoga or various esoteric, occult methods, enables a person to travel into other dimensions, popularly known as astral travel or astral projection or remote viewing. The Secret : What they don’t want you to KNOW! Source.

Are Birthmarks Connected to Your Past Life? | Spirit Science and Metaphysics A boy born with a mark said to be left by his violent death in a past life, included in research at the University of Virginia. (Screenshot/YouTube) A boy in Thailand with a birthmark on his neck that mirrors the mark made on his grandmother’s neck before she died, shortly before his birth. (Screenshot/YouTube) An old woman died in Thailand with the wish to reincarnate as a boy. Not long after the woman’s death, the daughter gave birth to a son with a white mark on the back of his neck that mirrored the white paste left on the woman’s neck. This is one of many cases recounted by Dr. The late Dr. Stevenson obtained a post-mortem report in 49 cases. In some cultures, people mark the deceased with soot or paste to recognize them when they are reborn. Here are a few examples of birthmarks related to past life memories studied by Stevenson. (Screenshot/YouTube) A boy in Turkey with a malformed right ear remembered having been shot and killed at close range on that side of his head.

Everything you need to know about DMT | Spirit Science Before you is a writing I found on a friendly site in5d, in which the author described a rather euphoric description of what DMT is about… Have a read, and let us know what you feel in the comments What can be said of DMT as an experience in relation to our own spiritual emptiness… Does it offer us answers? Do the short-acting tryptamines offer an analogy to the ecstasy of the partnership society before Eden became a memory? And if they do, then what can we say about it? What has impressed me repeatedly during my glimpses into the world of the hallucinogenic indoles, and what seems generally to have escaped comment, is the transformation of narrative and language. The experience that engulfs one’s entire being as one slips beneath the surface of the DMT ecstasy feels like the penetration of a physical membrane. The Aeon, as Heraclitus presciently observed, is a child at play with colored balls. Here is a tremendum barely to be told, an epiphany beyond our wildest dreams.

Dream argument The dream argument is the postulation that the act of dreaming provides preliminary evidence that the senses we trust to distinguish reality from illusion should not be fully trusted, and therefore any state that is dependent on our senses should at the very least be carefully examined and rigorously tested to determine whether it is in fact reality. Synopsis[edit] In Eastern philosophy and especially Chinese philosophy, this type of argument is well known as "Zhuangzi dreamed he was a butterfly" (莊周夢蝶 Zhuāngzhōu mèng dié): One night, Zhuangzi (369 BC) dreamed that he was a carefree butterfly, flying happily. After he woke up, he wondered how he could determine whether he was Zhuangzi who had just finished dreaming he was a butterfly, or a butterfly who had just started dreaming he was Zhuangzi. This was a metaphor for what he referred to as a "great dream": He who dreams of drinking wine may weep when morning comes; he who dreams of weeping may in the morning go off to hunt. Notes[edit]

9 Signs You’re An Old Soul “How old would you be if you didn’t know how old you are?” ~ Satchel Paige There is a special kind of person in our world who finds himself alone and isolated, almost since birth. His solitary existence isn’t from a preference or an antisocial temperament – he is simply old. Old in heart, old in mind and old in soul, this person is an old soul who finds his outlook on life vastly different and more matured than those around him. The “Old Soul” Robert Frost, Eckhart Tolle and even Nick Jonas have been called them. If you have not yet discovered whether you’re an old soul, read some of the revealing signs below. 1. Because old souls are disinterested in the pursuits and interests of the people in their age groups, they find it dissatisfying to make friends with people they find it hard to relate to. 2. Yep … this seems a little grandiose and overly noble, but the old soul finds himself naturally gravitating towards the intellectual side of life. 3. 4. 5. 6. 7. 8. 9. Jade Small More Posts

Personal Energy and Chakras | Willow Grove Monastery The personal energy centers and flows of the human body have been studied for thousands of years. The chakra system is one of the oldest and most widely known conceptualizations of some of the major structures of the energy systems of the human body. Here is some information that is generally helpful in developing some understanding and common language for discussing some of the main components of this conceptualization. How to See Auras If Chakras are the system of energy flow inside the body, then there must be a system of energy flow outside the body. It works in the same flow, but instead of an internal vortex, it manifests as an external wave. This is called your Aura. What is an Aura? It is another part of your energy body, just like your Chakras. The Merkaba is the all-encompassed description of both your Chakras and Auras combined. Every vibration, (meaning every feeling, thought, emotion, or anything else that you experience) is not something that is attached to you, but rather something you are re-creating and experiencing every moment. Aura’s can also be seen! Practice looking beyond the physical realm on a regular basis and you will be seeing and interpreting auras in no time. It’s very exciting! With love, Jordan Pearce

Kundalini Activation - or - What Is Happening To My Body?!? Article Shared with Permission from the Galactic Free Press, Article written by Will. Also check them out on facebook here! We see this fairly often, a person goes through an intense spiritual or transcendent experience, and afterwards they begin having some very strange things happen to them. They may start having sensations of intense heat or energy flowing through their body. They may start hearing tones, often very high-pitched. Their body may begin to feel like it’s vibrating, or they may feel pressure in their forehead. Now the term Kundalini itself is tied up with the various Hindu religions and also a number of Western mystery schools. The first thing to understand is how the chakras work. In addition to the seven main chakras, there’s hundreds, if not thousands more chakras all over your body. The Awakening by Trancestor Now the chakras don’t function independent of each other, they’re all connected. So what exactly is Kundalini?

Articles | ESOTERIC TEACHINGS Activation of Chakras: Opening Seven Seals Chakras are wheel-like vortices of energy, rotating around the spinal column. Our physical eyes can not see them and we tend to be poorly prepared and educated in their observation. How can we, people living on this planet, comprehend the subtle work of chakras operating beyond the limits of our habitual sensory perception? Even in those rare moments, when we are truly awake and receptive, and can feel their subtle effects, we may easily confuse them with other psychological sensations. Chakras are real – it is possible to experience them. Internal energetical centers such as chakras in Hinduism, dantians in Taoism and lata`ifs in Sufism, were known in mystical traditions from ancient times. The word chakra can be traced back to Upanishads, Puranas and Tantras, sacred Hindu and Buddhist texts. Within the waters runs the Moon, he with the beauteous wings in heaven. There are 7 main Chakras, all aligned with the center line of the body.