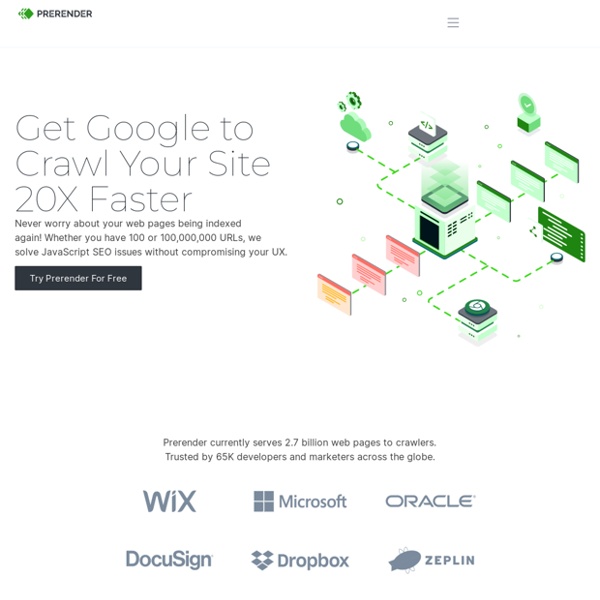 Bootstrapping an AngularJS app in Rails 4.0 - Part 1 The full GitHub repository for this tutorial is available here Introduction I was in the process of building a blog for myself as an exercise to try out Rails 4.0. Improving performance on twitter.com To connect you to information in real time, it’s important for Twitter to be fast. That’s why we’ve been reviewing our entire technology stack to optimize for speed. When we shipped #NewTwitter in September 2010, we built it around a web application architecture that pushed all of the UI rendering and logic to JavaScript running on our users’ browsers and consumed the Twitter REST API directly, in a similar way to our mobile clients.

Image Lightbox, Responsive and Touch‑friendly — Osvaldas Valutis As for the image lightboxes, I have always lacked simplicity for them. I mean not only the visual design, but the overall experience: from implementation to UX. All due respect, but I have never liked any of these light-fancy-face-boxes. They all were solving problems that just don’t exist: lots of unwanted features by default, total mess in markup, no native behavior for touch screens. I was working on a project and needed an image lightbox that solves these problems.

HashTag - Password Hash Type Identification (Identify Hashes) HashTag.py is a Python script written to parse and identify the password hash type used. HashTag supports the identification of over 250 hash types along with matching them to over 110 hashcat modes (use the command line switch -hc to output the hashcat modes). It is also able to identify a single hash, parse a single file and identify the hashes within it, or traverse a root directory and all subdirectories for potential hash files and identify any hashes found. One of the biggest aspects of this tool is the identification of password hashes. The main attributes used to distinguish between hash types are character set (hexadecimal, alphanumeric, etc.), hash length, hash format (e.g. 32 character hash followed by a colon and a salt), and any specific substrings (e.g. ‘$1$’). A lot of password hash strings can’t be identified as one specific hash type based on these attributes.

Angular 3 is hot on the heels of Angular 2 Fresh from the long-awaited release of its Angular 2 JavaScript framework in mid-September, Google will release Angular 3 in a few short months. Expected in March, Angular 3 will focus on improved tooling and a reduction in generated code, said Rob Wormald, of the Angular core team and a developer advocate at Google. It will feature a template compiler that provides feedback in an IDE on errors in a template, and it will generate 25 percent less code, thanks to improved compilation and changes in the framework's underlying mechanics. While more than two years passed between the April 2012 introduction of the 1.0 line and the Sept. 15 debut of the rewritten Angular 2 framework, Angular 3 gets a much-accelerated release schedule. Wormald promised a new major version twice a year from now on. "This is just semantic versioning in action for us and it means that we will every six months have a predictable release schedule," he stated.

Fullscreen Form Interface An experimental fullscreen form concept where the idea is to allow distraction-free form filling with some fancy animations when moving between form fields. View demo Download source Today we’d like to share a fullscreen form concept with you. The idea is to extend the minimal form concept and only show one question or form field at a time in fullscreen. The user can enter data in a distraction-free way and it allows to add some fancy animations for the fields. Server vs client side rendering (AngularJS vs server side MVC) There’s a lot of discussion related to server vs client side application rendering. While there is no “one choice fits all” solution, I’ll try to argue in favor of client side (specifically AngularJS) from different points of view. First of them is architecture. Well done architecture has clearly defined separation of concerns (SoS). In most cases minimal high level configuration is: Data storageServicesAPIPresentation

You Might Not Need jQuery jQuery and its cousins are great, and by all means use them if it makes it easier to develop your application. If you're developing a library on the other hand, please take a moment to consider if you actually need jQuery as a dependency. Maybe you can include a few lines of utility code, and forgo the requirement. If you're only targeting more modern browsers, you might not need anything more than what the browser ships with. Converting files to UTF-8 Some files, like Moodle import and export files and custom language packs or language files from third party modules need to be converted or treated as UTF-8 before they may be used with Moodle 1.6 and later. *nix like computers (including Mac OS X) Generally, this may be done with the iconv command on Unix, Linux or a Mac. iconv -f original_charset -t utf-8 originalfile > newfile

12 Books Every JavaScript Developer Should Read – JavaScript Scene – Medium I’m a big fan of JavaScript books. Being a long-time learner of JavaScript, I’ve had the pleasure of reading a great many of the popular JavaScript books on the market. These days I tend to skip the ones targeted to rank newbies, but I still read a lot of books intended for JavaScript developers with a little experience. This is a strange time for JavaScript books. Because we just got a major update to the JavaScript language in ES6, today’s JavaScript syntax and style looks quite different from the ES3-ES5 style JavaScript you’ll see discussed in most books, but because ES6 is really just a superset of ES5, most of the old books have nuggets of learning that still apply.

Page Preloading Effect A tutorial on how to re-create the page preloading effect seen on the website of Fontface Ninja. We are going to use CSS animations, 3D transforms and SVGs. View demo Download source Today we want to show you how to create a very simple page preloading effect with CSS animations, SVG and JavaScript. For websites, where it’s crucial to load all or part of the assets, these kind of preloader screens can be a creative way to make waiting a bit less boring for the visitor. The idea for this tutorial is based on the beautiful preloading effect seen on the website of Fontface Ninja.

Hipster Dev Stack Imagine this likely scenario: you work on your ceramic burr grinder drop ship store at nights and your organic cat saliva bike decal glue formula at weekends. One may have to pay for all this real work with a troublesome day job of some kind. The paymasters at this particular day job don’t share your own passion to make things The Right Way using Hapi and Om, and in fact may even claim their ‘hands are tied’ and you find yourself having to work with, ugh, Java. Like the whole coffee tie-in isn’t an obvious attempt to pander to urban ‘trendies’ by enterprise douches.

Tutorial: Tour of Heroes - ts - TUTORIAL Our grand plan for this tutorial is to build an app to help a staffing agency manage its stable of heroes. Even heroes need to find work. Of course we'll only make a little progress in this tutorial. What we do build will have many of the features we expect to find in a full-blown, data-driven application: acquiring and displaying a list of heroes, editing a selected hero's detail, and navigating among different views of heroic data.