Wait but why: Putting Time In Perspective 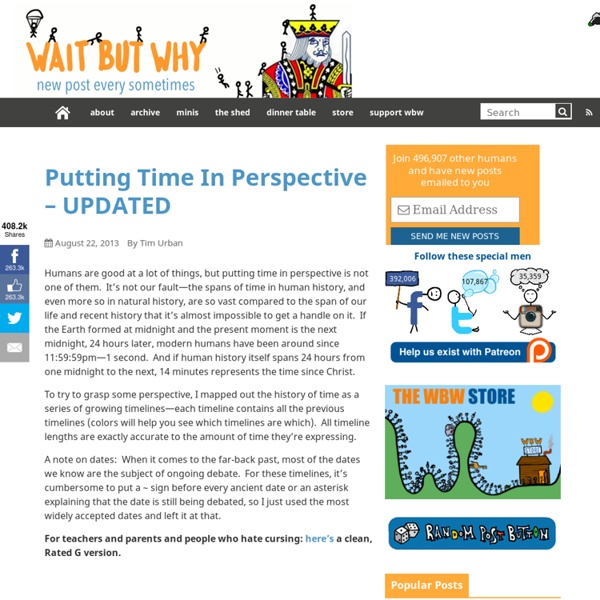 Humans are good at a lot of things, but putting time in perspective is not one of them. It’s not our fault—the spans of time in human history, and even more so in natural history, are so vast compared to the span of our life and recent history that it’s almost impossible to get a handle on it. If the Earth formed at midnight and the present moment is the next midnight, 24 hours later, modern humans have been around since 11:59:59pm—1 second. And if human history itself spans 24 hours from one midnight to the next, 14 minutes represents the time since Christ. To try to grasp some perspective, I mapped out the history of time as a series of growing timelines—each timeline contains all the previous timelines (colors will help you see which timelines are which). All timeline lengths are exactly accurate to the amount of time they’re expressing. A note on dates: When it comes to the far-back past, most of the dates we know are the subject of ongoing debate.

Better Identification of Viking Corpses Reveals: Half of the Warriors Were Female Shield maidens are not a myth! A recent archaeological discovery has shattered the stereotype of exclusively male Viking warriors sailing out to war while their long-suffering wives wait at home with baby Vikings. (We knew it! We always knew it.) Plus, some other findings are challenging that whole “rape and pillage” thing, too. How to Clean Shimano STI Shifters and Brake Levers Neil asked: How do I clean the Shimano STI shifters and brake levers on my bicycle? My road bike STI shifters and brake levers get gunked up with road grime and sweat and eventually the up-shift won’t work because the ratchet is stuck. Cleaning with degreaser seems to just wash the gunk further into the shifter, plus it coats the contacts of the gear position sensors so the flight-deck computer no longer works because it doesn’t see the correct gear setting. Shimano STI systems require regular maintenance to function properly.

Brains flush toxic waste in sleep, including Alzheimer’s-linked protein, study of mice finds Scientists say this nightly self-clean by the brain provides a compelling biological reason for the restorative power of sleep. “Sleep puts the brain in another state where we clean out all the byproducts of activity during the daytime,” said study author and University of Rochester neurosurgeon Maiken Nedergaard. Those byproducts include beta-amyloid protein, clumps of which form plaques found in the brains of Alzheimer’s patients. Staying up all night could prevent the brain from getting rid of these toxins as efficiently, and explain why sleep deprivation has such strong and immediate consequences. Too little sleep causes mental fog, crankiness, and increased risks of migraine and seizure. Rats deprived of all sleep die within weeks.

Dual DNA Streams For European Inheritance This is a careful analysis of the apparent DNA distribution throughout . It is observed that two groups of peoples emerged by way of naturally expanding populations. The Southern one is presumed to originate out of the Levant to dominate the Mediterranean littoral. 9 beliefs of remarkably successful people - Yahoo Finance Canada I'm fortunate enough to know a number of remarkably successful people. Regardless of industry or profession, they all share the same perspectives and beliefs. And they act on those beliefs: 1. Time doesn't fill me.

I Saw It on the Internet, part one This is part one of a series on posts on fact checking science related articles. Read part two of this series. -- Part 3 - Part 4 The next time you log into your favorite social media site, take a moment to look at all the “amazing”, “shocking”, and “astounding” articles that your friends and family have shared. Encyclopedia: Medieval Cosmology and Worldview Medieval cosmology was centered around the concept of the Ptolemaic universe, named after Greek astronomer Ptolemy (ca. 150 CE). In this geocentric (earth-centered) model, the earth was the motionless center of the universe, with the rest of the universe revolving around it in spheres. Ptolemy's work was based on Aristotle's (384-322 BCE) idea of an ordered universe, divided into the sublunary, or earthly, region which was changeable and corruptible, and the heavenly region, which was immutable and perfect. Aristotle posited that the heavens contained 55 spheres, with the Primum Mobile, "Prime Mover" or "First Moveable", giving motion to all the spheres within it.

William James on Habit by Maria Popova “We are spinning our own fates, good or evil, and never to be undone. Every smallest stroke of virtue or of vice leaves its never so little scar.” “We are what we repeatedly do,” Aristotle famously proclaimed. “Excellence, then, is not an act, but a habit.” As Babies, We Knew Morality - Emily Esfahani Smith New research supports the understanding that all people are born with a sense of good and bad. What does that say about altruism, community, and the capacity to kill one another? Several years ago, an energetic young mother, Tia, was out and about with her infant Aimee when disaster struck: a group of men, accompanied by vicious dogs, surrounded the pair, snatched up Aimee, and brutalized Tia. They left her helpless and without her daughter. Aimee was eventually rescued. But Tia was too battered to look after her.

The "Missing" American Plague When Europeans arrived in the New World in 1492, a new era of trading was born – everything from cultures and ideas to potatoes and tobacco. However, one thing that might have been skipped over in your history class was the huge transfer of diseases, viruses, bugs, and lurgies. Within 500 years, the native population of the Americas dropped by 90 percent. Although war and strife caused their fair share of deaths, the overwhelming majority were caused by a cocktail of smallpox, influenza, cholera, measles, Black Death, and other Old World diseases. Do we need to be a lot more careful about publicly lauding doctors who support paleo principles There's been a lot of press recently around Dwight Lundell, MD - a retired heart surgeon who is cited in at least one traditional food blog as "an accomplished surgeon". He had a SOTT.net article in which he sounded reasonably in line with paleo principles. He's even had a recent March 17 Fox News appearance. Like others, I had the impulse to trumpet this, "Heart Surgeon says yadayadagrassfedsaturatedfatisgoodyadayada..

The Story of Saliva Humans secrete two kinds of saliva, stimulated and unstimulated, no more alike than most siblings. The prettier child is stimulated saliva. It comes from the parotid glands, between cheek and ear. When a plate of Erika Silletti’s spaghetti carbonara makes your mouth water, that’s stimulated saliva. It makes up 70 to 90 percent of the two to three pints of saliva each of us generates daily. We’re going to gather some now. Ancient Irish Genomes Reveal Massive Migrations To The British Isles Researchers sequencing the genomes from prehistoric Irish individuals for the first time – a female farmer and three men who lived several thousand years ago – reveal genetic changes that parallel the onset of the Neolithic and Bronze Age transitions in Ireland. The findings are published in Proceedings of the National Academy of Sciences this week. The Neolithic transition, marked by the advent of farming, was thought to have arrived in Ireland around 3750 BCE.

World Renowned Heart Surgeon Speaks Out On What Really Causes Heart Disease We physicians with all our training, knowledge and authority often acquire a rather large ego that tends to make it difficult to admit we are wrong. So, here it is. I freely admit to being wrong. As a heart surgeon with 25 years experience, having performed over 5,000 open-heart surgeries, today is my day to right the wrong with medical and scientific fact. I trained for many years with other prominent physicians labelled “opinion makers.” Bombarded with scientific literature, continually attending education seminars, we opinion makers insisted heart disease resulted from the simple fact of elevated blood cholesterol.