Debunking the Myth of the 10,000-Hours Rule: What It Actually Takes to Reach Genius-Level Excellence 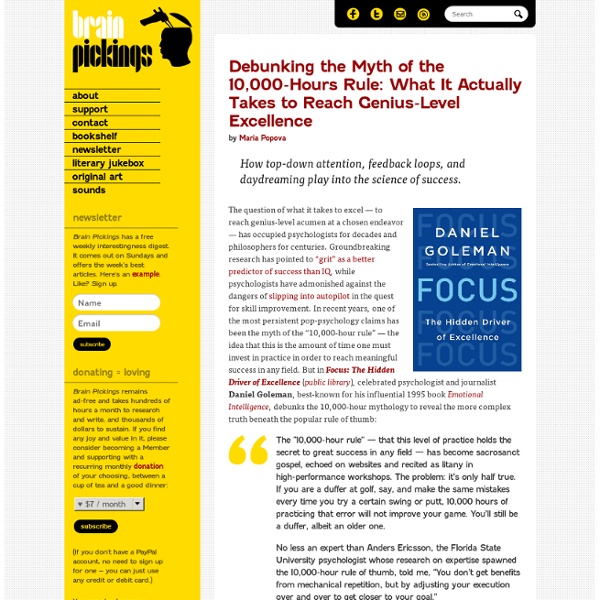 by Maria Popova How top-down attention, feedback loops, and daydreaming play into the science of success. The question of what it takes to excel — to reach genius-level acumen at a chosen endeavor — has occupied psychologists for decades and philosophers for centuries. Groundbreaking research has pointed to “grit” as a better predictor of success than IQ, while psychologists have admonished against the dangers of slipping into autopilot in the quest for skill improvement. In recent years, one of the most persistent pop-psychology claims has been the myth of the “10,000-hour rule” — the idea that this is the amount of time one must invest in practice in order to reach meaningful success in any field. But in Focus: The Hidden Driver of Excellence (public library), celebrated psychologist and journalist Daniel Goleman, best-known for his influential 1995 book Emotional Intelligence, debunks the 10,000-hour mythology to reveal the more complex truth beneath the popular rule of thumb:

The Secret To Learning New Skills Twice As Fast Learning a new skill doesn’t depend so much on how much practice you do, but how you practice. The key is to subtly vary your training with changes that keep your brain learning. By changing up your routine, new research says, you can cut the time to acquire a new skill by half. Acquiring new motor skills requires repetition, but iterative repetition is much more effective than just doing the same thing over and over. Banned TED Talk: Graham Hancock – The War on Consciousness Yet another TED talk banned by the TED community due to the challenge it poses to mainstream science. The talk was done at a TEDx conference and aired on the TEDx YouTube channel for a period of time before it was removed due to its content. After personally listening to this talk it is quite clear why it was censored.

Fail Safe: Debbie Millman’s Advice on Courage and the Creative Life By Maria Popova The seasonal trope of the commencement address is upon us as wisdom on life is being dispensed from graduation podiums around the world. After Greil Marcus’s meditation on the essence of art and Neil Gaiman’s counsel on the creative life, here comes a heartening speech by artist, strategist, and interviewer extraordinaire Debbie Millman, delivered to the graduating class at San Jose State University. The talk is based on an essay titled “Fail Safe” from her fantastic 2009 anthology Look Both Ways: Illustrated Essays on the Intersection of Life and Design (public library) and which has previously appeared on Literary Jukebox. The essay, which explores such existential skills as living with uncertainty, embracing the unfamiliar, allowing for not knowing, and cultivating what John Keats has famously termed “negative capability,” is reproduced below with the artist’s permission.

The Art of Looking: What 11 Experts Teach Us about Seeing Our Familiar City Block with New Eyes by Maria Popova “Attention is an intentional, unapologetic discriminator. It asks what is relevant right now, and gears us up to notice only that.” “How we spend our days,” Annie Dillard wrote in her timelessly beautiful meditation on presence over productivity, “is, of course, how we spend our lives.”

50 Visually Appealing CSS Tutorials & Techniques If you are looking for in-depth articles on the inner workings of flexbox, or a comprehensive explanation for using CSS regions, then this is definitely not the post for you. Instead, we have squarely put our focus on those CSS tutorials that not only make the smaller details of the web visually appealing, but are also really useful. You know what we mean… fantastic text effects, innovative button styles, space-saving navigation systems, subtly animated form elements… that kind of thing. We have organised the tutorials and techniques into the following categories: Typography Techniques; Button Tutorials, Menu &amp, Navigation Techniques, Form Element Tutorials, SVG &amp, CSS Styling Techniques, Styling Anchor Links, Web Page Components Tutorials, CSS Layout Techniques, and finally a mixed bag of cool miscellaneous tutorials.

Robots and Babies Both Use Curiosity to Learn Humans have a drive to eat. We have a drive to drink. We have a drive to reproduce. Curiosity is no different, says George Loewenstein, a professor of economics and psychology at Carnegie Mellon University. Our insatiable drive to learn—to invent, explore, and study ceaselessly—“deserves to have the same status as those other drives.”

3 Things Mindfulness is Not. ~ Ruth Lera Via Ruth Leraon Apr 18, 2014 The experience of practicing mindfulness or meditation is one that is most often beyond words. There is an elusive quality to touching into the moment—and only this moment—that is hard to describe, perhaps impossible. However, in our North American perfectionist culture, which is obsessed with hating ourselves and constantly striving to be better, the word mindfulness has been usurped to mean many different things. 1. 100 Ideas That Changed Art by Maria Popova From cave paintings to the internet, or how art and cultural ideology shape one another. On the heels of yesterday’s 100 Ideas That Changed Photography comes 100 Ideas That Changed Art (public library) — a succinct account of the most influential developments in the history of art, from cave paintings to the internet, compiled by art historian and broadcaster Michael Bird. From conceptual innovations like negative space (#98), color codes (#33), and street art (#94) to landmarks of communication like making books (#21), propaganda (#12), and handwriting (#24) to ideological developments like “less is more” (#30), protest (#79), and the body as surface (#9), each idea is contextualized in a 500-word essay with key visual examples.

Kierkegaard on Anxiety & Creativity by Maria Popova “Because it is possible to create — creating one’s self, willing to be one’s self… — one has anxiety. One would have no anxiety if there were no possibility whatever.” 7 Ways to Better Listen to Your Intuition Elizabeth Renter, naturalsociety.com | Have you ever been in a situation where your “gut feeling” told you one thing, but your rational mind said another? If you went with your brain rather than your intuition, there’s a good chance you ended up regretting your decision. Your intuition is the subconscious leader that many people fail to give proper respect to. But learning to listen to this internal compass could help you make better decisions and live a more fulfilling life.