Your Thoughts Can Release Abilities beyond Normal Limits 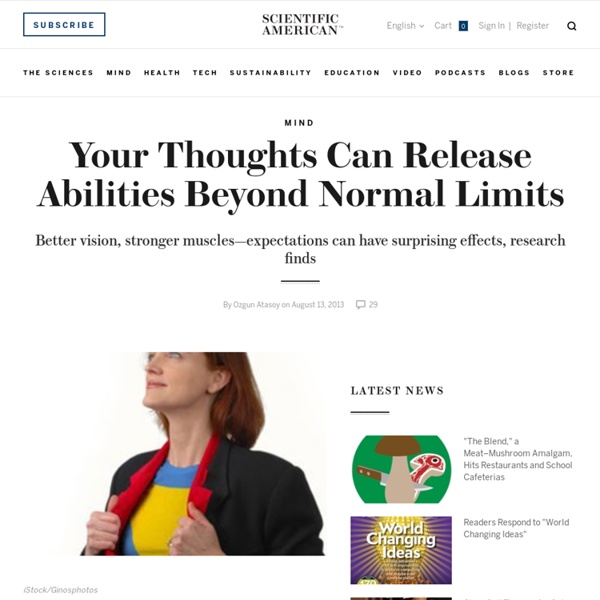 There seems to be a simple way to instantly increase a person’s level of general knowledge. Psychologists Ulrich Weger and Stephen Loughnan recently asked two groups of people to answer questions. People in one group were told that before each question, the answer would be briefly flashed on their screens — too quickly to consciously perceive, but slow enough for their unconscious to take it in. Our cognitive and physical abilities are in general limited, but our conceptions of the nature and extent of those limits may need revising. Can our thoughts improve our vision? To rule out the possible effect of motivation, the researchers brought another group of people into the cockpit and asked them to read a brief essay on motivation. In an eye exam, we are used to start experiencing problems at the bottom third of the eye chart, where letters start to get small. We also tend to think that our bodies respond to physical exercise in a mechanical way.

Some Think Completely Different: Complex Adaptive Systems | Profesorbaker's Blog Complex Adaptive System (Credit: Google images) Dr. Igor Nikolic graduated in 2009 on his dissertation: co-evolutionary process for modelling large scale socio-technical systems evolution. He received his MSc as a chemical– and bioprocess engineer at the Delft University of Technology. He spent several years as an environmental researcher and consultant at University of Leiden where he worked on life cycle analysis and industrial ecology. Igor Nikolic: “Tonight, when you go home, you will perform a very small, seemingly insignificant, action, which will have a dramatic global consequence. How can we understand complex adaptive systems? Igor Nikolic: “Things that consist of many different entities, acting, reacting, to each other, without any centralised control, having emergent behaviour, creating a pattern of behaviour, that looks like something we can recognise, like a city in an industrial region.” What properties do complex adaptive systems have? 1. 2. Can you explain this further?