5 Reasons You Should Be Teaching Digital Citizenship 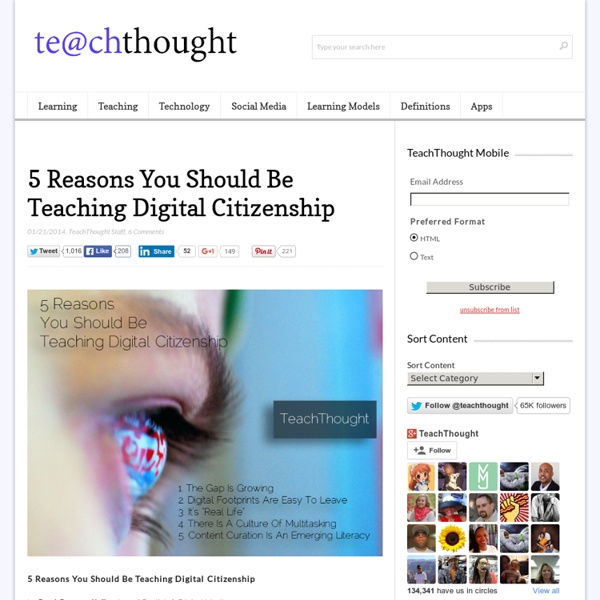 5 Reasons You Should Be Teaching Digital Citizenship by Paul Barnwell, Teacher of English & Digital Media Students buzzed about the latest uproar on Instagram. This type of cyberbullying and reckless use of digital communication is rampant among teens, but this recent episode was only unusually due to its elevated publicity. Every day, I see a student deficit on how to mindfully employ the unbridled potential and power of their smartphones and other digital tools. Is it those cruel sources who exploit the images? Is it parents who purchase smartphones and laptops for their children and fail to set boundaries or teach their kids about responsible use? Is it the lack of education and discussion in schools about the ways students can be more mindful, responsible users of technology? A combination, of course. 5 Reasons You Should Be Teaching Digital Literacy 1. 2. By the end of the class, many students were deleting inappropriate photos and tweets. 3. 4. 5. Conclusion Your Comments

Essential elements of digital citizenship Nearly all of the ISTE Standards list digital citizenship as one of the aspects of education technology that all members of a school or district should support. Specifically, the standards tend to focus on the safe, legal and ethical use of technology in schools. This is certainly at the heart of the ideas behind digital citizenship, but as technology integration grows, not only in schools but in society as a whole, I believe the concept of digital citizenship will continue to expand. When I wrote my first book, Digital Citizenship in Schools, with Gerald Bailey, we considered where this might lead on a bigger scale. Respect Digital access: Advocating for equal digital rights and access is where digital citizenship starts.Digital etiquette: Rules and policies aren’t enough — we need to teach everyone about appropriate conduct online.Digital law: It’s critical that users understand it’s a crime to steal or damage another’s digital work, identity or property. Educate Protect

Cybersmart Tagged What you do online could tag you for life This captioned film contains moving images, a sound track and dialogue. A full copy of the script, including scene descriptions, is provided in a separate file titled ‘Tagged film script’. Gold — WorldMediaFestival Silver — New York Festivals Winner – ATOM Awards When a group of high-school friends post a rumour about a rival it sparks a chain reaction that leaves no one untouched. Developed by the Australian Communications and Media Authority’s Cybersmart program, Tagged is recommended for use with students aged 14 and over. Tagged is supported by lesson plans and compelling character reflection interviews. buildingdigitalcitizens - home Digital citizenship: creating a deliberative pedagogical context | Social Theory Applied Published by Cristina Costa on May 17, 2014 Democracia y Libertad (CC) by Flickr ID Elisabeth D’Orcy Digital citizenship and digital literacies are topics with a growing popularity, given the impact of the so called digital economy debate on curriculum design. Obviously this is debatable and heavily reliant on the mindset of both individuals and institutions involved in it. In trying to look for critical approaches to both the themes of citizenship and literacy I found the work of Habermas and of those associated with him. As already alluded to in a previous post, the combination of such topics with interpretations of the ‘digital world’ are however more difficult to find. Searching for key readings, I found a book chapter by Tomas Englund (2012) on ‘Educational implications of the ideas of deliberative democracy’. Englund puts an emphasis on deliberative communication as a democratic form of life, of which the school should be part. Reference: Englund, T. (2012).

Copyright Flowchart: Can I Use It? Yes? No? If This… Then… | Langwitches Blog It is the responsibility of all educators to model good digital citizenship for their students. Especially when it comes to copyright, plagiarism and intellectual property. The waters are murky. It is every educator’s responsibility to become familiar , observe and model for their students! I have written about copyright on this blog many time. The waters are murky, it is not an easy topic. Together with the Academic Technology Team at Graded- The American School of São Paulo, the importance of developing a school policy in regards to copyright was discussed. We did our due diligence in researching and gain a better understanding of how other educational organizations were dealing with copyright policy creation, teacher education and support. We have ubiquitous digital access, ease of duplication and distribution of information. The following infographic chart was developed with an introduction of a New Era of Copyright Consciousness and a suggested simplified flow to follow: Related No!

Facts About Cyber Bullying|Anti Bullying Information Center-Nobullying.com Frequency of Cyberbullying 81% of young peoplethink bullying online is easier to get away with than bullying in person.53% of kids admit having said something mean or hurtful to another person online. More than 1 in 3 have done it more than once Over 95% of teenagers use social networking sites to communicate with peers. Nearly 43% of kids have been bullied online. 1 in 4 has had it happen more than once. 70% of students report seeing frequent bullying online. “Hyper-networking” teens (those who spend more than three hours per school day on online social networks) are 110% more likely to be a victim of cyberbullying, compared to those who don’t spend as much time on social networks. 1 in 10 adolescents or teens have had embarrassing or damaging pictures taken of themselves without their permission, often using cell phones. Cyber Bullying Facts: Cyberbullying Platform Cyber Bullying Facts : Demographics Girls are about twice as likely as boys to be victims and perpetrators of cyber bullying.

Left to Our Own Devices Creative, unforeseen adaptations of familiar technologies can help us make our relationships more meaningful. Our well-being centers on the meaningfulness of our relationships: our intimate ties, our associations with a larger circle of people, and our sense of interconnectivity with a collective tribe. Technology has become deeply embedded in how we build these relationships and define ourselves. It is undeniable that we can use technology in ways that are alienating—texting while talking, for example. But as a clinical psychologist creating and studying technology, I have been impressed by how people draw on their devices to enhance their relationships—in particular their capacities for being alone, interconnected, and attuned. Alone Aloneness is central both to individual identity and close relationships. Amidst this relational fluidity, people attach to technologies as transitional objects—items that represent nurturing relationships and thereby provide psychological comfort. Attuned

Turn Every Touchable Surface into Your E-learning Screen? Now it's Possible! What if a day comes, when all of corporates and all of education, became nothing but one colossal touchscreen? The thermal touch technology can now materialize this fantasy into a reality. What's more! The thermal imaging that powers this technology promises to exponentially augment your reality and bring you spectacular results. Just announced a week ago, you might wonder how this technology manages to achieve the promised results from an implementation point of view. Well! What could be the various areas of application of this technology? An example would be, an exam question paper distributor, can now save paper copies of the question papers, in a storage box or room, and lock or open the storage box or room, by now entering a keycode either through tapping the surface of the storage box or through tapping the door of the storage room, without having to use an actual physical keypad. We are still years to go, before this product gets distributed commercially across the consumer markets.

Digital Tattoo: What's Yours? Teachers Need to Follow Their Own Rules Somebody recently said to me, "I can't believe they way they misbehave and the lack of respect they show. They talk on their phones, text, and talk while I talk, don't listen to each other, come in late, leave early and have no patience for those who disagree." Who is this person talking about? A teacher talking about her students?A principal talking about her faculty?An in-service presenter talking about teachers attending the training? The sad truth is that you don't know. Behavior Follows Values To be honest, had cell phones been invented while I was a seventh grade teacher, I might have been tempted to text during a boring faculty meeting. Students Understand a Lot More Than We Realize Many behavior problems that teachers face in their classrooms come from students who quickly see whether or not their teachers value appropriate behavior. Shouldn't Adults Have Different Behavior Standards Than Children? When I raise this issue with educators, I often hear, "But we're adults.

Why Sharing Your Good Work Is Necessary, Not Boastful Just last week, I have having a conversation with two educators at a family picnic. They were a thoughtful pair, and they had a wonderful grasp of teaching and learning. About halfway through the conversation, I asked them the following question: "Have you ever considered your sharing your good work on Twitter or social media?" I thought the question was relatively innocuous as both of them had checked Facebook or Instagram throughout our chat. However, their responses were really interesting. Their words caused me to stop and refelct. Enter the 2014 Gallup Poll. The Gallup Poll is an annual tool that seeks to understand the general opinions and feelings of the public in the United States with regards to education. However, it's critical that we add our voices, the voices of educators, to the conversation.

Twitter for Digital Citizenship | Miss Spink on Tech On Friday I read this article, published in the local Leader Newspaper. The article was based on a complaint made by an older sibling of a student at Roxburgh Homestead PS about Twitter being used in a year two classroom…which to any reader probably sounds like an irresponsible thing for a school to allow. These views were backed up by “cybersaftey expert”, Susan McLean. I have been a longtime advocate for using Twitter in education, in fact, it was more than three years ago now when I started using Twitter to model and teach authentic global digital citizenship. It has been almost two years since this article was published in The Age, celebrating the positives use of such a tool in a variety of educational contexts. What worries me the most is that this conversation still needs to be had. Susan McLean, the “cybersaftey expert” and former policewoman suggests that “the problem is you’re exposing children to a world that technically they’re not supposed to be in”. @Kidsjig @3JessMLP12C