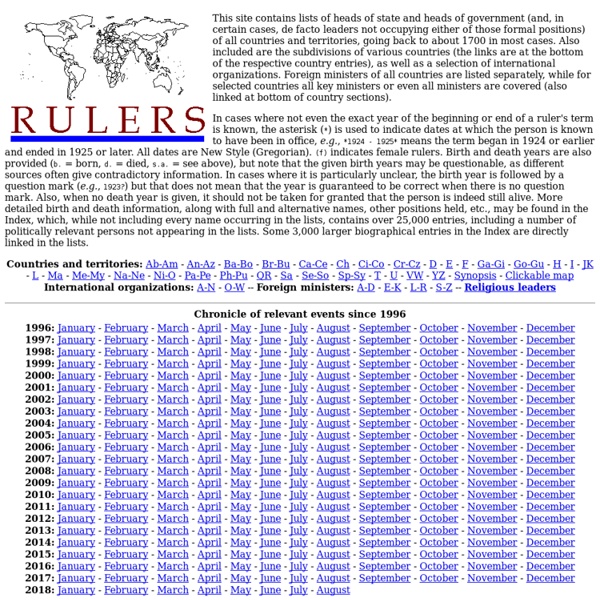 This site contains lists of heads of state and heads of government (and, in certain cases, de facto leaders not occupying either of those formal positions) of all countries and territories, going back to about 1700 in most cases. Also included are the subdivisions of various countries (the links are at the bottom of the respective country entries), as well as a selection of international organizations. Recent foreign ministers of all countries are listed separately. In cases where not even the exact year of the beginning or end of a ruler's term is known, the asterisk (*) is used to indicate dates at which the person is known to have been in office, e.g., *1924 - 1925* means the term began in 1924 or earlier and ended in 1925 or later. All dates are New Style (Gregorian). (f) indicates female rulers.

Events, ENQA (Qualité de l'ESR en Europe) If you are interested in hosting an ENQA event, please see the Guidance. 9th ENQA Training of Agency Reviewers (FULL) The 9th ENQA Training of Agency Reviewers will take place on 12-13 May 2014 in Bern, Switzerland. maps home page Down to: 6th to 15th Centuries | 16th and 19th Centuries | 1901 to World War Two | 1946 to 21st Century The Ancient World ... index of places Aegean Region, to 300 BCE Aegean Region, 185 BCE Africa, 2500 to 1500 BCE Corruption Perceptions Index Overview of the index of perception of corruption, 2013. Since the turn of the new millennium, Transparency International (TI) has published the Corruption Perceptions Index (CPI) annually ranking countries "by their perceived levels of corruption, as determined by expert assessments and opinion surveys."[1] The CPI generally defines corruption as "the misuse of public power for private benefit."[2]

BIBFRAME Authorities Draft Specification - 28 April 2014 (BIBFRAME - Bibliographic Framework Initiative, Library of Congress) This version: Status of this Document Draft for public review (28 April 2014) Please send general comments about this document to the listserv bibframe@loc.gov or via email to bfcomments@loc.gov. To the extent possible under law, the Library of Congress has waived all copyright and related or neighboring rights to this work. Changes in this version (28 April 2014) An example of a BIBFRAME Authority represented as a reusable resource is provided (figure 1A).

Kleptocracy Kleptocracy, alternatively cleptocracy or kleptarchy, (from Greek: κλέπτης - kleptēs, "thief"[1] and κράτος - kratos, "power, rule",[2] hence "rule by thieves") is a form of political and government corruption where the government exists to increase the personal wealth and political power of its officials and the ruling class at the expense of the wider population, often with pretense of honest service. This type of government corruption is often achieved by the embezzlement of state funds. Characteristics[edit] Kleptocracies are generally associated with corrupt forms of authoritarian governments, particularly dictatorships, oligarchies, military juntas, or some other forms of autocratic and nepotist government in which no outside oversight is possible, due to the ability of the kleptocrat(s) to personally control both the supply of public funds and the means of determining their disbursal. Effects[edit] Examples[edit]

The True Cost of US Military Equipment Embed this infographic on your site! <a href=" src=" alt="Military Equipment Costs" width="500" border="0" /></a><br />From: <a href=" This infographic takes a look at the amount of tax payer money that goes into funding specific military equipment ranging from the 'small' items to the truly gargantuan in price. The graphic then compare these prices to things that the average American can relate to such as median income, cost of a college education, health insurance, or the price of buying a home.

Library of Congress Names The Library of Congress Name Authority File (NAF) file provides authoritative data for names of persons, organizations, events, places, and titles. Its purpose is the identification of these entities and, through the use of such controlled vocabulary, to provide uniform access to bibliographic resources. Names descriptions also provide access to a controlled form of name through references from unused forms, e.g. a search under: Snodgrass, Quintus Curtius, 1835-1910 will lead users to the authoritative name for Mark Twain, which is, "Twain, Mark, 1835-1910." 25 Scary Facts About Government Brainwashing Although there are a lot of unfounded myths and conspiracy theories about brainwashing, it is still considered to be a very serious and scary mind control technique. As a student, you're used to analyzing problems from all angles and making your own deductions, independent of what anyone else tells you. But what if things didn't always work that way? Here are 25 scary and surprising facts about brainwashing. Theory and Systems These mind control and brainwashing theories tackle the history of brainwashing and different techniques used to control victims.