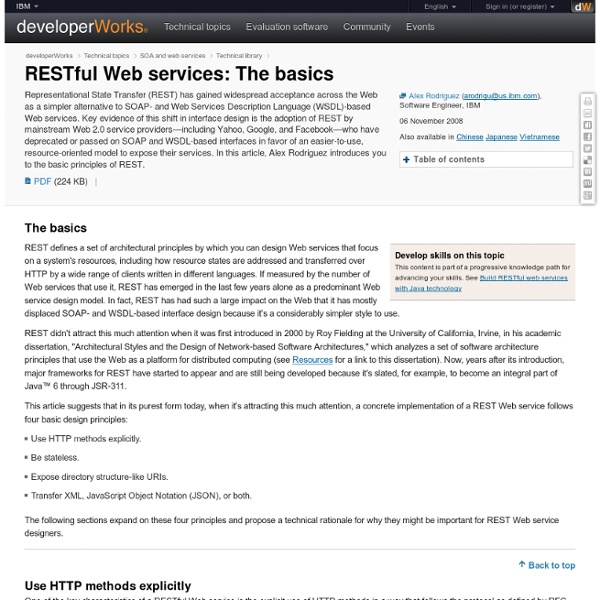 The basics REST defines a set of architectural principles by which you can design Web services that focus on a system's resources, including how resource states are addressed and transferred over HTTP by a wide range of clients written in different languages. If measured by the number of Web services that use it, REST has emerged in the last few years alone as a predominant Web service design model. In fact, REST has had such a large impact on the Web that it has mostly displaced SOAP- and WSDL-based interface design because it's a considerably simpler style to use. REST didn't attract this much attention when it was first introduced in 2000 by Roy Fielding at the University of California, Irvine, in his academic dissertation, "Architectural Styles and the Design of Network-based Software Architectures," which analyzes a set of software architecture principles that use the Web as a platform for distributed computing (see Resources for a link to this dissertation). Back to top Listing 1.

What is REST? As REST is an acronym for REpresentational State Transfer, statelessness is key. Essentially, what this means is that the necessary state to handle the request is contained within the request itself, whether as part of the URI, query-string parameters, body, or headers. The URI uniquely identifies the resource and the body contains the state (or state change) of that resource. REST APIs must be hypertext-driven » Untangled I am getting frustrated by the number of people calling any HTTP-based interface a REST API. Today’s example is the SocialSite REST API. That is RPC. It screams RPC.

Simple example - Node.js, Restify, MongoDb and Mongoose - Backbone.js Tutorials Before I start, the Backbone.js parts of this tutorial will be using techniques described in "Organizing your application using Modules to construct a simple guestbook. Getting started To easily understand this tutorial you should jump straight into the example code base. HATEOAS The HATEOAS constraint decouples client and server in a way that allows the server functionality to evolve independently. Details[edit] A REST client enters a REST application through a simple fixed URL. All future actions the client may take are discovered within resource representations returned from the server. The media types used for these representations, and the link relations they may contain, are standardized. The client transitions through application states by selecting from the links within a representation or by manipulating the representation in other ways afforded by its media type.

A RESTful Web service, an example It's often hard for people to "get" REST, this is mostly due to the fact that REST isn't a tangible thing like a piece of software or even a specification, it's a selection of ideals, of best practices distilled from the HTTP specs. I've always found that the best way to understand something is to see an example, to see the principles in action first and worry about the details later once I understand the general gist. So here's a little example of a RESTful version of a simple Web service you might already know about, the Delicious API. Delicious has “a simple REST API”, or rather, a simple POX over HTTP API, that is, it has a perfectly usable HTTP and XML based API for accessing your bookmarks and tags, but it isn't very RESTful. Why not?

RESTful API Design: Teach a Dog to REST UPDATED November 2011: Check out the second edition of the webinar - RESTful API Design. It's been 10 years since Roy Fielding first defined REST in his dissertation on Architectural Styles and the Design of Network-based Software Architectures. Since then, REST is often held as the standard for usable, well-designed, easy-to-integrate APIs. At the Cloudstock hackathon, I presented "Teach a Dog to REST," asking the question: where are all the elegant REST APIs we'd all hoped to see? While many claim REST has arrived, many APIs in the wild exhibit arbitrary, productivity-killing deviations from true REST.

Custom Search This document describes how to use the JSON/Atom Custom Search API. Making a request REST, or Representational State Transfer, in the JSON/Atom Custom Search API is somewhat different from traditional REST. Instead of providing access to resources, the API provides access to a service. RESTful Web Services: A Tutorial More than a decade after its introduction, REST has become one of the most important technologies for Web applications. Its importance is likely to continue growing quickly as all technologies move towards an API orientation. Every major development language now includes frameworks for building RESTful Web services. As such, it is important for Web developers and architects to have a clear understanding of REST and RESTful services. This tutorial explains REST architecturally, then dives into the details of using it for common API-based tasks. While REST stands for Representational State Transfer, which is an architectural style for networked hypermedia applications, it is primarily used to build Web services that are lightweight, maintainable, and scalable.

Getting Started with REST Testing NOTE: As of version 4.6 of SoapUI, the functionality described in this article has been revised and improved. If you're using an earlier version, please upgrade! SoapUI supports extensive testing of REST services and their resources, representations, etc. Let's start with a quick demo using the Google Maps API to get you started!

311 Status: Maintenance JCP version in use: 2.7 Java Specification Participation Agreement version in use: 2.0 Description: This JSR will develop an API for providing support for RESTful(Representational State Transfer) Web Services in the Java Platform. Please direct comments on this JSR to the Spec Lead(s)

CSS Style Guides As we wrap up our recent poll on ordering CSS properties, it brings up the larger issue of CSS style guides. Ordering properties is just one choice you have to make that makes up a complete styling strategy. Naming is a part of it.