Animated films that will leave you devastated 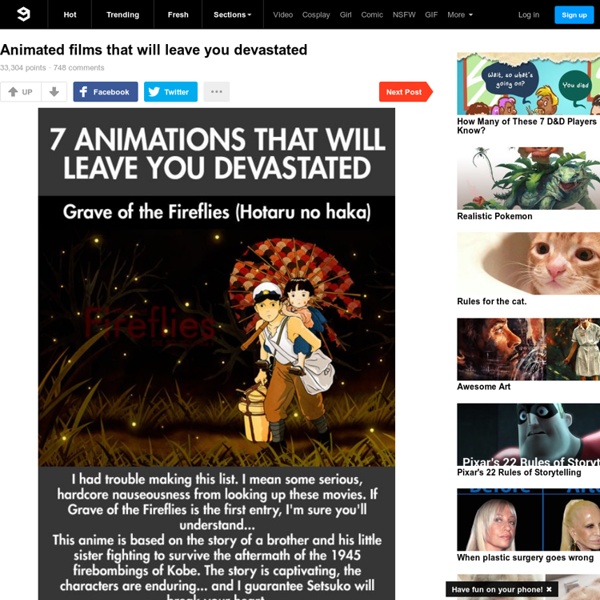 Zelda Lawn Ornaments So that last post got me thinking about how great it would be for a city park to adopt a Zelda layout, enough to get me thinking about doing a crowdfunding project (still mulling it over). My thoughts then migrated to something a little closer to home – the backyard to be exact. How cool would it be decorate the yard with Zelda-themed lawn ornaments in the style of item pickups? This is a million times better than gnomes!* These would be ornaments with a little peg underneath that you’d plug into the lawn anywhere you want. What’s in that image? Masterpieces like you’ve never seen them before During the past few months, I’ve become increasingly interested in digital art. Glitch, visualizations, pixels … it’s all very exciting, and I’ve wanted to dive in myself. As I progressed, I found myself tweaking the level of abstraction so much that I wrote code to do it in the browser.

Sagano/Arashi-yama Area The Sagano and Arashi-yama districts are located in the western part of Kyoto City. In the 8th century, aristocrats often came to this area of rice fields and bamboo woods to enjoy the colored leaves, or to go boating. The landscape today is still reminiscent of that period. Tenryu-ji Temple, a World Cultural Heritage Site, was erected in the 14th century by the then shogun, Ashikaga Takauji, in a gesture of mourning for the Emperor. Get high on sci-fi: 10 short story collections that will blow your mind We’re huge short story fans around this way, but while we definitely foster great big loves for the likes of Alice Munro and V.S. Pritchett, we also very much dig the science-fiction greats. We reckon newcomers to the sci-fi field might get the impression it’s dominated by novels or series of novels, but that’s not really the case: excellent science-fiction short stories abound.

25 Spectacular Movies You (Probably) Haven't Seen Midnight in Paris Woody Allen’s latest places starving writer Owen Wilson in Paris with his fiancée, Rachel McAdams. Searching for inspiration for his incomplete novel, Owen begins taking strolls around the city at night where he discovers an unexpected group of people. I wish I could be more specific, but it would ruin the surprise. Know that it is brilliant, witty and full of mystique. 92% on Rotten Tomatoes (RT). Don’t Know What To Do With Your Life? Here’s A Secret For You We live in an age where both humanity and planet earth are going through a lot of changes. If we look back roughly fifty years ago, we would have generally known our place and role in society. Women were housewives or secretaries, and men were the breadwinners, the heads of the family. We had guidelines reinforced by war-time propaganda and shows like “I Dream of Genie” and “Bewitched.”

Great Unsung Science Fiction Authors That Everybody Should Read Saying that Clifford Simak's writings sometimes have a "1950 pulpy feel" is both true and misleading, at least for those who think the pulps were Mickey Spillane by way of Quentin Tarantino. Simak's characters tended to be both thinking and feeling people — rare in most pulp writings — and violence, while it was used, was rarely a first choice, and was usually committed with reluctance that a better solution hadn't been found. In a word, his characters do tend toward being gentle people, men and women who'd enjoying sitting on the steps, watching the stars come out, in the company of their dog and their favorite robot. He's one of my favorite writers, and I'm delighted to have met him a handful of times at conventions. Thanks for giving him a boost!

Brave New Worldview - 30 Science Fiction Films of the 21st Century A decade into the 21st Century and we have arrived at the future. The promise of Tomorrow. But instead we have looming energy crises, endless middle east conflict and more disappointing, we have no flying cars, Heck, for all the bright and clean future promised in 2001: A Space Odyssey, none of the real companies used as brands in the film even exist anymore. Even moving from the late 1960s to the mid 1980s, nobody makes DeLoreans (although they occasionally sell on Ebay), but cloning and tablet computing (as promised by Star Trek: The Next Generation) have more or less come to pass in this century. It is not the gizmos or the distopian aesthetics, that have brought Science Fiction into the new millennium, but the questions it asks of people or society in a future time or place and how they reflect on our own times.

6 Famous Authors Who Were Nothing Like You Expect One of the most often repeated pieces of advice any writer will hear is "Write what you know," and many of the most respected authors in history have done exactly that: Joseph Conrad knew a lot about watching friends die in a river in the middle of the jungle, Dr. Dre knows a lot about smoking weed every day, and so on. However, we tend to forget that sometimes writers just make shit up that has nothing to do with their real lives, and as a result we have an image of them that directly contradicts their actual personality. For instance, if you only know them from their work, you'd never guess that ... #6. J.R.R.

376 of the best one-liners on the internet 1. I asked God for a bike, but I know God doesn’t work that way. So I stole a bike and asked for forgiveness. 2.