Go Where? Sex, Gender, and Toilets 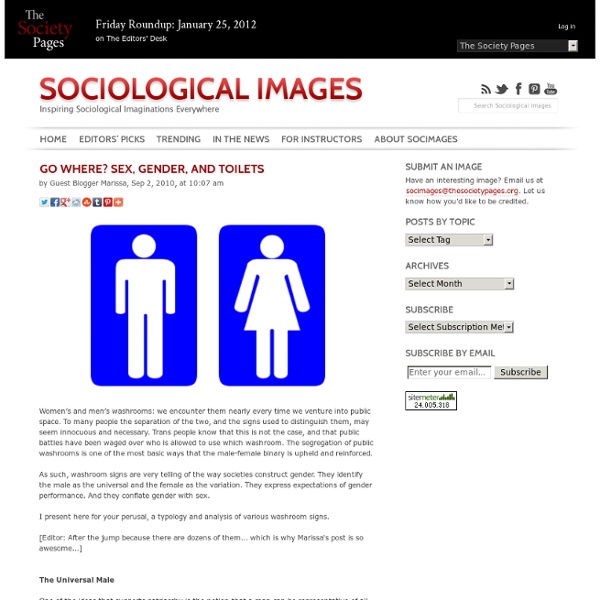 Women’s and men’s washrooms: we encounter them nearly every time we venture into public space. To many people the separation of the two, and the signs used to distinguish them, may seem innocuous and necessary. Trans people know that this is not the case, and that public battles have been waged over who is allowed to use which washroom. The segregation of public washrooms is one of the most basic ways that the male-female binary is upheld and reinforced. As such, washroom signs are very telling of the way societies construct gender. I present here for your perusal, a typology and analysis of various washroom signs. [Editor: After the jump because there are dozens of them... which is why Marissa's post is so awesome...] The Universal Male One of the ideas that supports patriarchy is the notion that a man can be representative of all humanity, or “mankind”, while a woman could only be representative of other women. Occasionally, we see that men are people, and women are people with waists:

This Isn't the Petition Response You're Looking For Official White House Response to Secure resources and funding, and begin construction of a Death Star by 2016. This response was published on January 11, 2013. By Paul Shawcross The Administration shares your desire for job creation and a strong national defense, but a Death Star isn't on the horizon. The construction of the Death Star has been estimated to cost more than $850,000,000,000,000,000. However, look carefully (here's how) and you'll notice something already floating in the sky -- that's no Moon, it's a Space Station! Keep in mind, space is no longer just government-only. Even though the United States doesn't have anything that can do the Kessel Run in less than 12 parsecs, we've got two spacecraft leaving the Solar System and we're building a probe that will fly to the exterior layers of the Sun. We are living in the future! If you do pursue a career in a science, technology, engineering or math-related field, the Force will be with us!

Creating the All-Terrain Human Come winter, when most elite ultrarunners keep running, Jornet puts away his trail-running shoes for six months and takes up ski-mountaineering racing, which basically amounts to running up and around large mountains on alpine skis. In this sport too, Jornet reigns supreme: he has been the overall World Cup champion three of the last four winters. So what’s next when you’re 25 and every one of the races on the wish list you drew up as a youngster has been won and crossed out? But bigger challenges bring bigger risks. Chamonix, France, is a resort town wedged into a narrow valley at the foot of Mont Blanc, just over an hour’s drive southeast of Geneva. As we drove to and from Valle d’Aosta in Italy, where he would train that day, Jornet told me in soft-spoken English (one of five languages­ he speaks) how he first stunned the small world of elite ultrarunning. His versatility amazes other runners, including Jurek, who today is a friend. Don’t you sweat? What are you running after?

102 Spectacular Nonfiction Stories from 2012 | Byliner Anthologies Each year, I track the most exceptional stories I encounter while assembling my twice-weekly newsletter, The Best of Journalism, as well as acting as an editor-at-large for Byliner. These projects afford me the opportunity to read as much impressive nonfiction journalism as any single person possibly can. The result is my annual Best of Journalism List, now in its fifth year. If you’re feeling nostalgic, here’s the 2011 edition. There are, of course, worthy pieces of writing and reporting that escaped my attention in 2012, but I can assure you that all of the 102 stories listed below deserve wider attention—as do the authors of these stories. In the spirit of full disclosure, I’ll also note that I’m a staff writer at The Atlantic (where my colleagues neither saw nor influenced this list) and have done my best to remain objective. No. 1 No. 2 No. 3 No. 4 "Four hundred feet long. No. 5 No. 6 "In five hours Walker will take the court for the Idaho Stampedes. No. 7 No. 8 No. 9 No. 10 No. 11 No. 12

short stories at east of the web A game of Scrabble has serious consequences. - Length: 4 pages - Age Rating: PG - Genre: Crime, Humor A semi-barbaric king devises a semi-barabaric (but entirely fair) method of criminal trial involving two doors, a beautiful lady and a very hungry tiger. - Length: 7 pages - Genre: Fiction, Humor Mother and Daughter had repeated this routine every school day since Jessie was five years old but today was the day Jessie started “Big School” as her mother embarrassingly insisted on telling everyone they had met for the past three months. - Length: 19 pages - Genre: Fiction He looked into her eyes. - Length: 20 pages - Age Rating: U It was Zach's idea to start a Beatles cover band in high school. - Length: 21 pages “Jonah, are you with us?” - Length: 2 pages Husselbee cleared his throat, rapped on the glass, and told the woman in the green polo shirt he had murdered a man. - Length: 13 pages She returns to the kitchen and stops in her tracks. - Genre: Children - Length: 16 pages - Genre: Sci-Fi

Five Words One Sentence - True stories, told in one sentence. Short Short Fiction Contest Winners 2011 - Aspens 78 Word Fiction Contest Winners Jonnie Miles via Getty Images This fall, in partnership with Colum McCann and the Aspen Writers' Foundation, we held a short fiction contest. Very short: Entries had to be exactly 78 words long. The winner, chosen from 4,300 entries, is Nate Ochs, a 33-year-old smoke jumper from South Dakota. "How the Blood Moves in Winter" By Nate Ochs If you buy Marv a scotch he'll tell you he hasn't slept with her in a dozen years. MORE ABOUT THE WRITER: Nate Ochs hasn't written a word for 10 years — since it left him frustrated as a 20-something bartender in New Orleans. "Letters in War Time" By CJ Hauser Back then you knew which girls had husbands in the war because when you kissed them they tasted of envelope glue. Marjorie said, I can't. How could she resist a flat-footed fool like myself? She couldn't behind the gazebo. Then he came home to a ticker-tape parade. Marjorie doesn't answer any of my letters. "Simmering" By Sheila Redling Get a restraining order, my mother said after my arm was set.