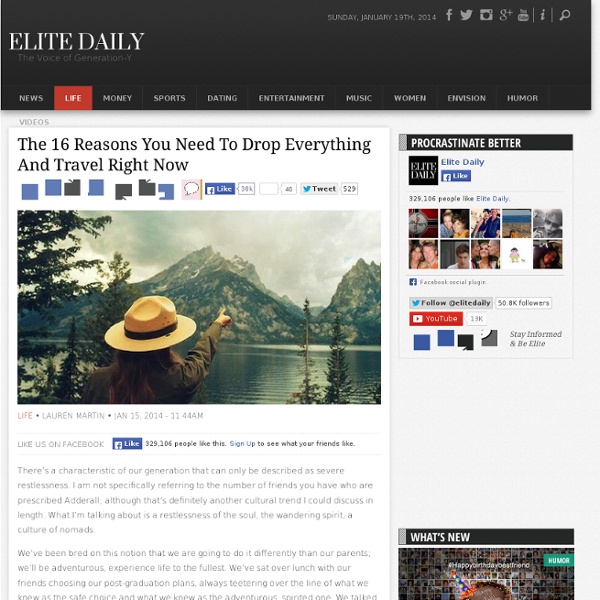 There’s a characteristic of our generation that can only be described as severe restlessness. I am not specifically referring to the number of friends you have who are prescribed Adderall; although that’s definitely another cultural trend I could discuss in length. What I’m talking about is a restlessness of the soul, the wandering spirit, a culture of nomads. We’ve been bred on this notion that we are going to do it differently than our parents; we’ll be adventurous, experience life to the fullest. We’ve sat over lunch with our friends choosing our post-graduation plans, always teetering over the line of what we knew as the safe choice and what we knew as the adventurous, spirited one. We talked about living in Brazil in a house by the beach, spending days on the hammock and driving taxis at night. We thought about moving to London, buying expensive rain gear and renting a studio on Piccadilly Circus. You’re young You’re more willing to take risks With less to lose, there’s more to gain.

Amazing Events Around the World Here are the most bizarre/amazing events around the the world that you are missing out on every year by not exploring. This is motivation for you to go out and see what else is out in the world! (I apologize in advance for making your local concerts and street fairs look like petting zoos) Bunyol, Spain — August 26th – 11am Every year 30,000 people assemble in the streets of Bunyol, Spain to participate in the largest tomato fight in the world. 125,000 kg of tomatoes are brought into the city via truck so ammunition is never short. 5 massive tomato-packed rockets are exploded in the air to commence the fight. There are only two rules:

20 Gorgeous Winter Landscapes 57K views 503 days ago by LostInSpace Regardless if you live on the side of the globe that never gets to see the snow, or are one of those who know it quite well – admit it, it does give you some amazing photographing material. This phase of the natural cycle puts everything around us to sleep and lets the nature rest and recuperate before it’s spring again: most animals start hibernating, and the prolonged darkness makes it feel like a constant night time. [Read more...]

32 Surreal Places On Earth That Belong In A Dream. I’ve Never Wanted To Travel So Badly… During the rainy season, the world’s largest salt flat becomes the world’s largest mirror. The Salar was born when several prehistoric lakes joined into one. The salt flat is so reflective, it’s used to calibrate satellites. Tianzi Mountains, China These unqiuely tall and thin mountains are so alien that they were used in James Cameron’s “Avatar.” Formed underwater 380 million years ago, the ground rose as a result of volcanic activity.

The Other Mystery of Easter Island Moai statues Easter Island is branded into popular consciousness as the home of the mysterious and towering moai statues, but these are not the only curiosity the South Pacific island holds. Where the moai are fascinating for their unknown purpose and mysterious craftsmen, the island's lost language of Rongorongo is equally perplexing. The unique written language seems to have appeared suddenly in the 1700s, but within just two centuries it was exiled to obscurity. Known as Rapa Nui to the island's inhabitants, Rongorongo is a writing system comprised of pictographs.

Luxury Furniture, Property, Travel & Interior Design The luxury Dhigu Resort, Maldives Anantara Dhigu Resort & Spa is encircled by mystic lagoons and unspoilt crystal shores, the resort is a heavenly sanctuary on a secluded paradise island, offering barefoot elegance in one of the world’s most celebrated tropical havens. Here the sparkling turquoise waters of the Indian Ocean offer an endless horizon of aquatic allure and the evocative location is matched by a tranquil island design style. Anantara Dhigu is a luxurious five-star resort hidden on tropical terrain on Dhigufinolhu Island in the Maldives’ South Male Atoll, a mere 35 minute speedboat journey from the island nation’s international airport, or a scenic five minutes by private chartered seaplane.

7 reasons Lisbon could be Europe's coolest city Think they stay out late in Madrid? In nightlife areas such as Bairro Alto, Lisbonites stay out until dawn -- then keep going. Lisbon has some of the world's most fascinating cobbles, a "street art" obsession shown off here in the city's giant mapa mundi. The Fairy Tale Forest By Ildiko Neer Hungarian photographer Ildiko Neer began operations in 2009. He draws his inspiration from nature, but a special thrill is wood – the sun makes its way through the trees, the sound of leaves and stunning colors of autumn. All this was reflected in the works of photographer.

The Most Wonderful Castles From Around The World Since childhood castles are explaind as grand places, full of your favorite fairytale characters and their dreaded evil step mothers. No matter where it is or who lives there, castles contain such a majestic air about them. Castles can be romantic, spooky, historical, or downright beautiful, and usually they are all of the above. Back in the medieval period, most castles were built as a form of control, so that a ruling family could keep watch over their surrounding town. Today many castles from the past stand tall and proud, a memory of all that has happened there, and all that stands to come. Let these castles transport you to another world, can you only imagine what living at these castles would be like?!

The 33 Most Beautiful Abandoned Places In The World Many people doesn’t know, and didn’t even heard about these famous abandoned places. Many of these places are really something amazing, but they are also really sad when you take a closer look at them. On the folowing list, you can see abandoned planes, abandoned ships, as well as the abandoned houses, and so many other things, that are really amazing and magnificent. So, check out these amazing abandoned places photos. 1. Christ of the Abyss at San Fruttuoso, Liguria Places to see at least once in life They say there are places in this world that anyone should see them at least once in life. Although we want each of you to go see them live, and we offer in the form of photos below. If I had to redo the path for real, the steps you would wear in Norway in Greece, Iceland, Netherlands, Croatia, China and Bora Bora. Whether it will attract the ocean or dream of green forests and endless, fascinating places of the world is waiting to delight. And who knows how many are still undiscovered?