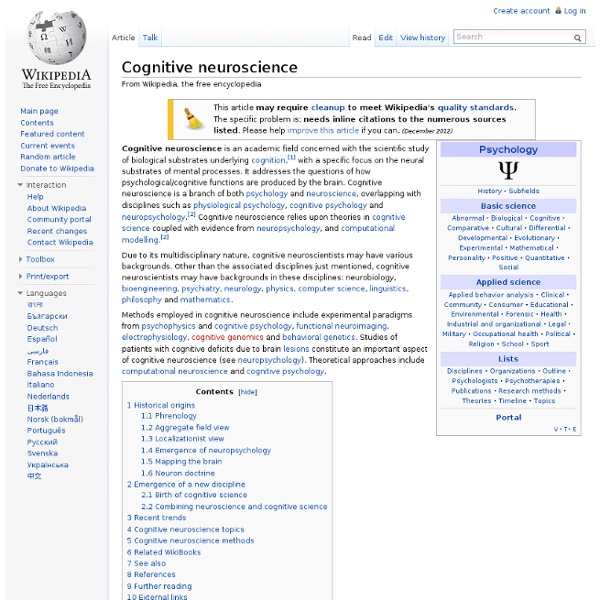 [FR] créativité - CERVEAU PSYCHO n°46 Neurocognitive Neurocognitive functions are cognitive functions closely linked to the function of particular areas, neural pathways, or cortical networks in the brain substrate layers of neurological matrix at the cellular molecular level. Therefore, their understanding is closely linked to the practice of neuropsychology and cognitive neuroscience, two disciplines that broadly seek to understand how the structure and function of the brain relates to perception defragmentation of concepts, memory embed, association and recall both in the thought process and behaviour. A neurocognitive deficit is a reduction or impairment of cognitive function in one of these areas, but particularly when physical changes can be seen to have occurred in the brain, such as after neurological illness, mental illness, drug use, or brain injury. See also[edit] External links[edit] Neurocognitive Disorders in DSM-5 References[edit] Green, K.

House Watch: Is Heroism a Sign of Brain Disease? House M.D. is back after a mid-season hiatus, which means House Watch is back. This week’s return episode, “Larger Than Life,” hews closely to House M.D.’s procedural formula, which is a safe but smart move after all that shipper business between House and Cuddy last year. But on to the medicine… (Actually, onto the spoiler alert: If you haven’t seen this week’s episode, hurry over to the differential-diagnosis meeting before reading on. The case this week is quite similar — almost gratingly so — to the case last November that posed the question of whether faith is a mental illness. Masters finds the case in the ER and brings it to the team. House is unmoved, setting up the question of whether heroism is an indication of brain disease. But there are no such masses, so on to the differential (which is done this week not on the office white board but on a bus-stand ad that features Taub as the face of Princeton-Plainsboro). Taub says, “Could be drugs.” Foreman: “Tumor in the ear.

Psychodynamics Psychodynamics, also known as dynamic psychology, in its broadest sense, is an approach to psychology that emphasises systematic study of the psychological forces that underlie human behavior, feelings, and emotions and how they might relate to early experience. It is especially interested in the dynamic relations between conscious motivation and unconscious motivation.[1] The term psychodynamics is also used by some to refer specifically to the psychoanalytical approach developed by Sigmund Freud (1856–1939) and his followers. Freud was inspired by the theory of thermodynamics and used the term psychodynamics to describe the processes of the mind as flows of psychological energy (libido) in an organically complex brain.[2] In the treatment of psychological distress, psychodynamic psychotherapy tends to be a less intensive, once- or twice-weekly modality than the classical Freudian psychoanalysis treatment of 3-5 sessions per week. Overview[edit] History[edit] Current[edit] See also[edit]

Why sleep deprivation can make you unethical - Post Leadership Posted at 10:21 AM ET, 05/13/2011 May 13, 2011 02:21 PM EDT TheWashingtonPost New research shows that sleep deprivation has worse effects than just the occasional mistake or error—and can cost organizations just as much, if not more. (MATT MCCLAIN - THE WASHINGTON POST) As we all know, sleep deprivation can lead to exhaustion-fueled mistakes in the workplace, whether they be a simple typo in a quarterly report or life-threatening errors while operating machinery. In a forthcoming paper in the Academy of Management Journal, highlighted recently in the Financial Times, Michael Christian of the University of North Carolina’s Kenan-Flagler Business School and Aleksander Ellis of the University of Arizona’s Eller College of Management studied sleep-deprived nurses and students who’d pulled all-nighters in a sleep lab. How does this happen? And why does this matter for leaders? The numbers the two professors cite in their paper are startling. More from On Leadership: Engineering gender parity

How to be a neuroscientist In this post, I will teach you all how to be proper, skeptical neuroscientists. By the end of this post, not only will you be able to spot "neuro nonsense" statements, but you'll also be able to spot nonsense neuroscience questions. I implore my journalist friends to take note of what I say in this post. Much has already been said on the topic of modern neuroimaging masquerading as "new phrenology". (Image source: The Roots - Phrenology) This post was prompted by a question over on Quora: What is the neurological basis of curiosity? The question itself is of a type that is commonly asked in cognitive neuroscience: where is <vague behavior> in the brain? But what does it even mean to ask where "curiosity" is in the brain? According to the article linked to in the current top answer on Quora: "So," you may ask, "what's wrong with that answer? You just got brain-mesmerized! I can prove, with one statement, that this answer is wrong (if you're impatient, jump to point 2 at the bottom). 1. 1. 2.

Introspection Introspection is the examination of one's own conscious thoughts and feelings.[1] In psychology the process of introspection relies exclusively on observation of one's mental state, while in a spiritual context it may refer to the examination of one's soul. Introspection is closely related to human self-reflection and is contrasted with external observation. Introspection generally provides a privileged access to our own mental states,[2] not mediated by other sources of knowledge, so that individual experience of the mind is unique. Introspection has been a subject of philosophical discussion for thousands of years. Psychology[edit] Wundt[edit] Titchener[edit] Historical misconceptions[edit] American Historiography of Introspection, according to some authors,[9][10] is dominated by three misconceptions. Recent developments[edit] One experiment tried to give their subjects access to others' introspections. Religion[edit] Eastern spirituality[edit] Jainism[edit] Hinduism[edit] In fiction[edit]

Conversation analysis Conversation analysis (commonly abbreviated as CA) is an approach to the study of social interaction, embracing both verbal and non-verbal conduct, in situations of everyday life. As its name implies, CA began with a focus on casual conversation, but its methods were subsequently adapted to embrace more task- and institution-centered interactions, such as those occurring in doctors' offices, courts, law enforcement, helplines, educational settings, and the mass media. As a consequence, the term 'conversation analysis' has become something of a misnomer, but it has continued as a term for a distinctive and successful approach to the analysis of social interaction. CA analysis[edit] As in all research, conversational analysis begins by setting up a research problem. The data collected for CA is in the form of video or audio recorded conversations. Basic structures[edit] Turn-taking organization[edit] Turn constructional component[edit] Turn allocational component[edit] Adjacency pairs[edit]

Biofeedback Biofeedback is the process of gaining greater awareness of many physiological functions primarily using instruments that provide information on the activity of those same systems, with a goal of being able to manipulate them at will.[1][2] Some of the processes that can be controlled include brainwaves, muscle tone, skin conductance, heart rate and pain perception.[3] Biofeedback may be used to improve health, performance, and the physiological changes that often occur in conjunction with changes to thoughts, emotions, and behavior. Eventually, these changes may be maintained without the use of extra equipment, even though no equipment is necessarily required to practice biofeedback.[2] Biofeedback has been found to be effective for the treatment of headaches and migraines.[4][5] Definition[edit] Sensor modalities[edit] Electromyograph[edit] The "Muscle Whistler", shown here with surface EMG electrodes, was an early biofeedback device[6] Feedback thermometer[edit] Electrodermograph[edit]