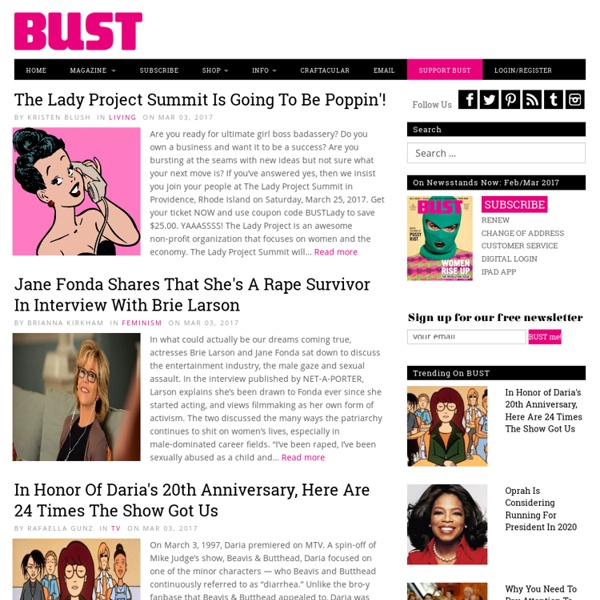 Headlines s Magazine Winter 2011: The Rise of Enlightened Sexism by Susan J. Douglas Is the ‘F’ word co-opted by conservatives & consumerist media? Where are real icons & core values? On The Issues Magazine, Winter 2011, considers feminist icons, feminist values and feminist cons. The Rise of Enlightened Sexism by Susan J. Douglas Today, we once again have what Betty Friedan famously called "a problem with no name." At the same time, these young women get the message loud and clear that the absolute last thing they should embrace is feminism. After reviewing the media fare geared to girls and women since the early 1990s, I came to see a rather large gap between how the vast majority of girls and women live their lives, the choices they are forced to make, and what we see -- and don't see -- in the media. What the media have been giving us then over the past fifteen years are fantasies of power. Today many young women regard feminism as the ideological equivalent of anthrax A New Brand of Sexism With women's equality supposedly won, sexist stereotypes are considered amusing

History Commons Why "fun feminism" should be consigned to the rubbish bin What is feminism? A political movement to overthrow male supremacy, according to us radicals. These days, however, young women (and men) are increasingly fed the line from "fun feminists" that it is about individual power, rather than a collective movement. Caitlin Moran, whose best-selling book has made her into one of the country's best-known fun feminists, is an apologist for porn and wasted an opportunity during a feminist debate on Newsnight to joke about cardigans. The writer Natasha Walter claims that being able to wear trousers and drink beer on her own means sexism is dead, and other "feminist-lite" types can be found blogging nonsense about the need to include men in our movement and not offending the poor dears with mentions of rape and domestic violence. We need to bring back the radical edge to feminism, and do away with any notion that slutwalking, lap dancing, sex working or Burkha-wearing is liberation for women. "Fun feminism" isn't feminism at all.

free spirit spheres Bamboo Magazine Untitled Document Masculine, feminine or human? posted on SleptOn.com, June 2, 2008. by Robert Jensen In a guest lecture about masculinity to a college class, I ask the students to generate two lists that might help clarify the concept. For the first, I tell them to imagine themselves as parents whose 12-year-old son asks, “Mommy/daddy, what does is mean to be a man?” When that list is complete, I ask the women to observe while the men answer a second question: When you are in all-male spaces, such as the locker room or a night out with the guys, what do you say to each other about what it means to be a man? The students, both men and women, laugh nervously, knowing the second list will be different from the first. From there, the second list expands to other descriptions: To be a man is to be a p layer, a guy who can attract women and get sex; someone who doesn’t take shit from people, who can stand down another guy if challenged, who doesn’t let anyone else get in his face.

Infobase Publishing - Home Disney Buys Star Wars: A New Hope for Women and Girls Last week, one of the only news items to penetrate the horrifying coverage of Hurricane Sandy’s devastation and the nerve-wracking anticipation for the US Elections was the surprising, perplexing, but exciting news that Disney was buying Lucasfilm and planning to release Star Wars Episode VII in 2015. It was like a shot of adrenaline to this weary geek’s heart. The Five Stages of Disney’s Buyout of Lucasfilm: 1) Denial. 2) Angst. 3) Cautious optimism. 4) Futility. 5) Resignation.— Eric S. Donaldson (@EricJokes) October 31, 2012 Like every geek, I’m riding the wave of emotions that comes with this news, with renewed “no, there is another” hope for new GOOD Star Wars movies, and anxiety that those hopes will be dashed yet again (I mean, think about what the word “Disneyfication” means.) The Opportunity for Women to Take Creative Control of Star Wars But what I always find interesting is when you take the areas of writing, producing and directing.

Diets - Plans for Weight Loss and Health Main Page 2. Act normal If you are a high-risk source, avoid saying anything or doing anything after submitting which might promote suspicion. 3. If you are a high-risk source and the computer you prepared your submission on, or uploaded it from, could subsequently be audited in an investigation, we recommend that you format and dispose of the computer hard drive and any other storage media you used. In particular, hard drives retain data after formatting which may be visible to a digital forensics team and flash media (USB sticks, memory cards and SSD drives) retain data even after a secure erasure. If you do this and are a high-risk source you should make sure there are no traces of the clean-up, since such traces themselves may draw suspicion. 4. If a legal action is brought against you as a result of your submission, there are organisations that may help you.

mental_floss Blog » The War on Suffrage “Nine little Suffergets, Finding boys to hate, One kisses Willie Jones, And then there are Eight.” Ten Little Suffergets tells the sad tale of ten little girls who lose their pro-suffrage leanings when they spy shiny objects like toys, men, and the Sandman. The 1915 picture book ends with the final baby suffragette cracking her baby doll’s head open. “And then there were none!” ends the book on a gleeful note. The suffrage movement, both in America and England, involved angry debates about the ideals of womanhood, the power and purpose of government, and how much beer everyone should be drinking. Suffrage Isn’t Sexy The suffrage movement was part of the larger debate known as “The Woman Question” in Victorian and Edwardian times, when people were discussing what a real woman looked like. In other words, letting women get a chance at the polls would destroy the society. This attitude was reflected in the suffragette caricatures drawn in newspapers and magazines. Babes and Booze 1.

Book Search Help Center - My Library FAQ For information on managing your Google eBooks, please see this article with instructions and tips. You can create a personalized library on Google Books which allows you to organize, review, rate, and search a customized selection of books. These collections are live online, and are accessible anywhere you can log in to your Google account. Bookshelves that are set to 'public' (with this icon showing a globe: ) are publicly visible to friends who know the URL of your collection, so once you've built a collection, you can share it with them by sending them a link to your library in Google Books. Getting started... Step 1: Log in to your Google account You must sign in to Google Books using your Google Account in order to add titles to your library or write reviews. Step 2: Add books to your library Add a single book: You can add any book in the Google Books index to your library. The bookshelves that are marked 'public' (with the icon showing two people) will be published online.