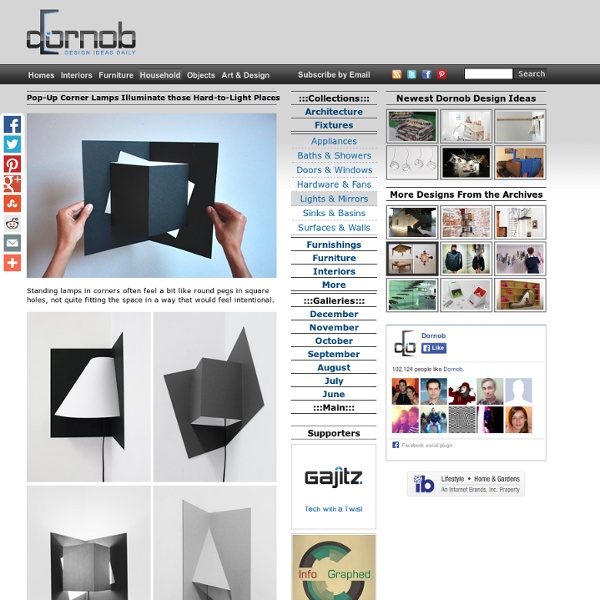 Standing lamps in corners often feel a bit like round pegs in square holes, not quite fitting the space in a way that would feel intentional. This flat-pack, fold-out solution from Well Well Designers is a low-cost and elegantly-designed approach that is minimalist in terms of both materials and appearance. The product packaging and typography are all comprehensively considered in form and function – this is not a typical in-the-box retail object, but a simple black (or blue or red) on white approach. “The Pop-up corner light is delivered in an envelope. The lamp is constructed from a sheet of polypropylene. The sheet is cut and incised, in such a way to produce a square, triangular or circular module when folded at a 90° angle.

Green Village Green Village, founded by jewelry designer John Hardy and designed by his daughter Elora, is a community of sustainable and ecological houses sitting along the Ayung River in Bali. Each of the homes are made entirely of bamboo, from Bali-based bamboo and construction company Ibuku, from the window frames to the staircase, tables, chairs, floors, and even the cabinets and the walls. Did you know that with very little attention or additional resources, a bamboo shoot can become a structural column within three years and that house could stand strong for a lifetime? Honestly, amazing. (Green Village via designboom) Psychology of Color [Infographic] Perhaps no choice is as vital to marketing as color. Whether you are selecting the color for a product or for your email marketing campaign, color has tremendous impact on all of us. Subconsciously, we associate different colors with different things.

30 Best Earth Pictures of the Week - July 10th to July 17th, 2012 1. The Blue Dragon by Steve Richards 2. Shore in Seychelles CF "Ice Breaker" Questions Great questions designed to help people in small groups get to know one another. If you could live in any sitcom, which one would it be? What was in your high school locker? Best dessert you have ever had? Something interesting you might not know about me is . . . Sydney Heritage Fleet Do you like the idea of a hammock for the stable ride it gives on a rolling ship, but don't like sleeping bent in a curve? This design of hammock is based on the principle of a suspension bridge - the suspension wires (hammock ropes) are curved, supporting a straight roadway (the part where you sleep). If the hammock is tensioned correctly, it allows you to sleep on your back, side or front, with a straight spine.

9 Fitness Tips to Help You Build Muscle, Lose Fat and Become a Better Athlete If you are in the fitness and bodybuilding world for some time, you’ve probably seen there is a ton of information about training, nutrition and supplements on the internet, magazines, television… Some of it is very useful, but unfortunately, most of it is very misleading. Often, when people find themselves overflown with information, they can pick bad advice, or even fail to act, mainly because they get confused and don’t know what is good and what is bad for them. So if you are just starting – here are a few fitness advices to take you the right way. Barcelona's Most Famous Building, Sagrada Familia, Gets Spectacularly Illuminated Sagrada Familia (Ode à la vie) - Démo officiel from Moment Factory on Vimeo. If you’ve ever travelled to Barcelona, you’ll know that you can’t go for a stroll around the city without encountering the work of its most famous architectural son Antoni Gaudí, especially his most famous work: the spindly, towering church Sagrada Família. Its gnarled, inside-of-a-cave-style experimental architecture isn’t what you’d immediately think of as the perfect canvas for some projection mapping, but then you’re not Montreal-based new media designers Moment Factory. They were tasked with creating a seven-act multimedia show for the La Mercè festival in Barcelona and set about projection mapping the Nativity façade of Sagrada Familia. Using 16 video projectors, 13 computers, 25 moving lights, and a canvas of 150m x 30m the team created a tale of rebirth and hope inspired by Gaudí’s color sketches. Photos courtesy of Moment Factory.

How One Teacher Turned Sixth Grade Into An MMO Editor’s Note: Ben Bertoli is a long-time Kotaku reader and commenter, a lifetime, dedicated video gamer and a sixth-grade teacher in Indiana. He reached out to Kotaku this past week to share the story of how he turned his class into a role-playing game. The enthusiasm and motivation of the children in Bertoli’s class evoke the success stories seen in gamified experiences such as Fitocracy. Here, Bertoli explains his creation, ClassRealm, how it works and what motivated him to develop it. Tahifehifa Island - Tonga, South Pacific The island's name is "Tahifehifa". It is located 15 km south of the town of Neiafu in the Vava'u island group of Tonga. The town of Neiafu is a small and very quaint town with a natural harbour (not really a commercial harbour or port, but rather a very protected natural bay.

I want sparks & I want them NOW! Update May 2003 - Marx Three is now up & running Do you like the idea of tesla coils and other high-voltage sparking stuff, but don't have the time, money or patience to build something that elaborate? Here's a fun little project that can make big, fat, noisy sparks at least 2 inches long, and can be built very quickly and cheaply. The Marx generator consists of an array of resistors, capacitors and spark gaps arranged as follows: The capacitors, C, are charged up in parallel via the 1M (one megohm) resistors, so they each become charged to the input voltage. When first (leftmost) spark gaps breaks down (sparks), the voltage across the next increases, causing it to break down, and so on for all the other gaps.

100 of the Most Inspiring Business Videos on YouTube YouTube is filled with inspirational videos of all types, including those created by businesses or individuals looking to inspire others to succeed. Let’s look at 100 of the most inspiring business videos ever placed on this site. Great Inspirational Tips for Business Success Take a look at these cool business inspiration clips. 1. 9 Steps to Achieve Any Goal – Isn’t it great to know that you can make your business and personal dreams come true in nine steps? How to Build a Marble Machine The centerpiece for this marble machine are the gears. They lift dozens of marbles at a time and send them down an amazing track of twists and turns. At first glance I thought this creation was some sort of wooden gear clock. The only thing that gave it away was the fact there were no hands on the face, not to mention it was missing numbers. If you go to the project site (click on the image) you will find an array of chutes and barrels and other things for the balls to do on their way down. I can’t tell if he had plans for this one or not.

Learning How to Code Has Never Been Easier Get the FlatPix UI Kit for only $7 - Learn More or Buy Now Programming isn’t just a niche specialization anymore, rather a necessity for tech-professionals regardless of the industry in which they work. Thankfully for them, it couldn’t be any easier.As such, there’s a big push lately to make coding literacy more widespread among the general populace. Even Mayor Bloomberg is getting in on the act, pledging to learn basic coding in 2012 as his New Year’s resolution.