Child born with HIV cured by US doctors 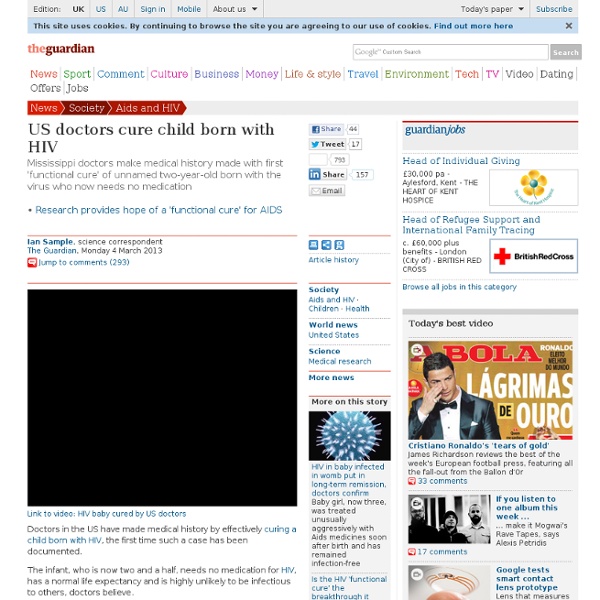 Link to video: HIV baby cured by US doctors Doctors in the US have made medical history by effectively curing a child born with HIV, the first time such a case has been documented. The infant, who is now two and a half, needs no medication for HIV, has a normal life expectancy and is highly unlikely to be infectious to others, doctors believe. Though medical staff and scientists are unclear why the treatment was effective, the surprise success has raised hopes that the therapy might ultimately help doctors eradicate the virus among newborns. Doctors did not release the name or sex of the child to protect the patient's identity, but said the infant was born, and lived, in Mississippi state. Dr Hannah Gay, who cared for the child at the University of Mississippi medical centre, told the Guardian the case amounted to the first "functional cure" of an HIV-infected child. "We expect that this baby has great chances for a long, healthy life. Doctors began treating the baby 30 hours after birth. Related:  Biology and Genetics • Physiology & Genetics

Getting stem cells from urine Human induced pluripotent stem cells (iPSCs) have been generated with varied efficiencies from multiple tissues. Yet, acquiring donor cells is, in most instances, an invasive procedure that requires laborious isolation. Here we present a detailed protocol for generating human iPSCs from exfoliated renal epithelial cells present in urine. This method is advantageous in many circumstances, as the isolation of urinary cells is simple (30 ml of urine are sufficient), cost-effective and universal (can be applied to any age, gender and race). Moreover, the entire procedure is reasonably quick—around 2 weeks for the urinary cell culture and 3–4 weeks for the reprogramming—and the yield of iPSC colonies is generally high—up to 4% using retroviral delivery of exogenous factors. View full text Figures

Is miscarriage murder? States that put fetal rights ahead of a mother's say so | Sadhbh Walshe Several states have pursued murder charges for women who have miscarried. Photograph: Graham Turner for the Guardian Back in 1872, just after she was arrested for casting an illegal vote, Susan B Anthony gave a rousing speech in which she posed the question of whether women are actually persons. Her point, of course, was that if women were indeed flesh and blood persons, then there could be no legal basis under the constitution to deny them a vote. It took nearly 50 more years – women finally achieved suffrage in 1920 – to get a definitive answer to what was a rhetorical question. Now, however, less than 100 years after that long-delayed answer, the question of whether women – or at least, pregnant women – are still persons endowed with all the human, civil, and constitutional rights that personhood bestows, is once again in play. These arrests and detentions were made possible by the relentless quest to undo Roe v Wade and restrict access to legal abortions.

Scientists Identify Gene Required for Nerve Regeneration | Genetics A gene that is associated with regeneration of injured nerve cells has been identified by a team of researchers led by Prof Melissa Rolls of Penn State University. In fruit flies with two normal copies of the spastin gene, a team of scientists led by Prof Melissa Rolls of Penn State University found that severed axons were able to regenerate. However, in fruit flies with two or even only one abnormal spastin gene, the severed axons were not able to regenerate (Melissa Rolls / Penn State University) The team has found that a mutation in a single gene can entirely shut down the process by which axons – the parts of the nerve cell that are responsible for sending signals to other cells – regrow themselves after being cut or damaged. “We are hopeful that this discovery will open the door to new research related to spinal-cord and other neurological disorders in humans,” said Prof Rolls, who co-authored a paper published online in the journal Cell Reports.

Growing brains in the lab Figure 1: Human embryonic stem cells spontaneously organize into neuroepithelial tissue containing multiple zones after growing for 70 days in culture. © 2014 Yoshiki Sasai, RIKEN Center for Developmental Biology During development, the nervous system forms as a flat sheet called the neuroepithelium on the outer layer of the embryo. This sheet eventually folds in on itself to form a neural tube that gives rise to the brain and spinal cord—a process that involves the proliferation and migration of immature nerve cells to form the brain at one end and the spinal cord at the other. Yoshiki Sasai, Taisuke Kadoshima and colleagues from the RIKEN Center for Developmental Biology have now shown that human embryonic stem (ES) cells can spontaneously organize into the cerebral cortical tissue that forms at the front, or ‘brain’ end, of the developing neural tube1. During human embryonic development, the neural tube thickens at both ends.

Child Hunger Is Exploding In Greece – And 14 Signs That It Is Starting To Happen In America Too Submitted by Michael Snyder of The Economic Collapse blog, The world is heading into a horrific economic nightmare, and an inordinate amount of the suffering is going to fall on innocent children. If you want to get an idea of what America is going to look like in the not too distant future, just check out what is happening in Greece. At this point, Greece is experiencing a full-blown economic depression. As I have written about previously, the unemployment rate in Greece has now risen to 27 percent, which is much higher than the peak unemployment rate that the U.S. economy experienced during the Great Depression of the 1930s. And as you will read about below, child hunger is absolutely exploding in Greece right now. Sadly, the truth is that child hunger is already rising very rapidly in our poverty-stricken cities. Unfortunately, more poor families slip through the cracks with each passing day, and these are supposedly times in which we are experiencing an "economic recovery".

Dundee-led project to create an ultrasound pill 12 March 2013Last updated at 07:13 ET The "sonopill" aims to avoid the need for uncomfortable endoscopic exams A University of Dundee-led project to develop a pill that can carry ultrasound technology has been awarded a £5m grant. The "sonopill" would relay ultrasound images from inside the body after being swallowed by patients. It is hoped it could allow gastrointestinal problems to be diagnosed without the need for uncomfortable endoscopic exams. The funding is from the Engineering and Physical Sciences Research Council. Researchers have already developed pills that contain tiny cameras. The "sonopill" aims to push that technology further. Less discomfort Prof Sandy Cochran, from the Institute for Medical Science and Technology at the University of Dundee, said: "The principal current method of examining problems within the gastrointestinal tract is endoscopy, which is very uncomfortable and requires a high-level of clinical skill.

Lori Marino – Dolphins are not healers Imagine this. Jay, an eight-year-old autistic boy, whose behaviour has always been agitated and uncooperative, is smiling and splashing in the pool. A pair of bottlenose dolphins float next to him, supporting him in the water. Jay’s parents stand poolside as a staff member in the water engages him in visual games with colourful shapes. Jay's parents, who had given up hope, are elated to have finally found a treatment that works for their son. ‘Jay’ is a composite character drawn from the dozens of testimonials that appear on dolphin-assisted therapy (DAT) websites, but stories like his, stories about the extraordinary powers of dolphins, have been told since ancient times. The mythic belief in dolphins as healers has been reiterated down the ages from the first written records of encounters with these animals. In ancient Rome and Mesopotamia, dolphins adorned frescoes, artwork, jewellery and coins, and in ancient Greece the killing of a dolphin was punishable by death. 18 June 2013

Peru Bans Monsanto and GMOs The first time I ever tasted a real tomato, I was in Cusco, Peru. I had picked them up at a Farmer’s Market, bought them from an old lady with wizened wrinkles and sun-browned skin. She’d carried a basket of them to market on foot from her scrap of land somewhere far down the mountain. I fell in love with the country and it’s people, the Quechua indians who are the remnants of the once proud Incas. Thanks to the indomitable spirit of that people, a ten-year ban on GMOs takes effect this week in Peru! Stephanie Whiteside reports, Peru’s ban on GMO foods prohibits the import, production and use of genetically modified foods. The victory is a long time coming. The decree banning GMO foods was drafted in 2008. A study done in April of 2011 by the Peruvian Association of Consumers and Users (ASPEC) tested 13 products purchased in major supermarkets and shops in Lima, Peru. President of ASPEC, Crisólogo Cáceres, comments, Protecting Bio-diversity Why 10 years? Want to know more about GMOs?