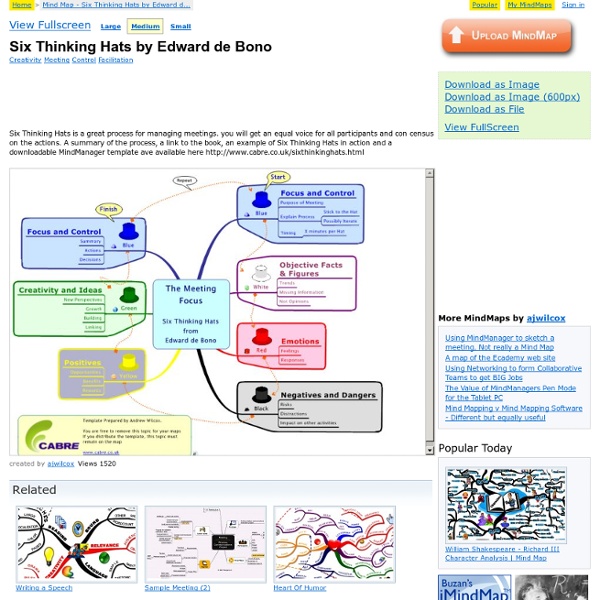 The de Bono Group - Six Thinking Hats Used with well-defined and explicit Return On Investment success in corporations worldwide, Six Thinking Hats is a simple, effective parallel thinking process that helps people be more productive, focused, and mindfully involved. A powerful tool set, which once learned can be applied immediately! You and your team members can learn how to separate thinking into six clear functions and roles. Using Six Thinking Hats®, you and your team will learn how to use a disciplined process which will... Significant Applications for the Parallel Thinking Process of Six Thinking Hats Leadership DevelopmentTeam Productivity, Alignment and CommunicationCreative and innovative thinkingMeeting leadership and decision makingProduct and Process Improvement, and Project Management Critical, Analytical Thinking and Problem-SolvingOrganizational Change/PerformanceWherever High Performance Thinking and Action is needed Introducing The de Bono Group Leader's Package Read more about Six Hats Online Here

Brainstorming The Brainstorming (brainstorm) method is a semi-structured creative group activity, used most often in ad-hoc business meetings to come up with new ideas for innovation or improvement. Members of the group are encouraged to put forward ideas about a problem and how it may be solved, in order to generate as many ideas as possible, even if they are not always usable alternatives. The idea behind brainstorming is, that a group of people can achieve a higher (synergy) level of creativity than the sum of the participants separately. Brainstorming Rules Three major rules for a successful brainstorm session are: Participants should be encouraged to come up with as much ideas as possible, however strange they are (there are no bad ideas). Brainstorming hints Some hints for a successful brainstorm session are: Use an experienced facilitator. The effectiveness of brainstorming Book: Michael Michalko - Thinkertoys (A Handbook of Business Creativity) - More Management Methods, Models and Theory

Synectics Synectics is a problem solving methodology that stimulates thought processes of which the subject may be unaware. This method was developed by George M. Prince (April 5, 1918 - June 9, 2009)[1] and William J.J. History[edit] The process was derived from tape-recording (initially audio, later video) meetings, analysis of the results and experiments with alternative ways of dealing with the obstacles to success in the meeting. The name Synectics comes from the Greek and means "the joining together of different and apparently irrelevant elements Gordon and Prince named both their practice and their new company Synectics, which can cause confusion as people not part of the company are trained and use the practice. Theory[edit] Synectics is a way to approach creativity and problem-solving in a rational way. According to Gordon, Synectics research has three main assumptions: One important element in creativity is embracing the seemingly irrelevant. Books[edit] See also[edit] References[edit]

Category:Creativity Techniques This A to Z of Creativity and Innovation Techniques, provides an introduction to a range of tools and techniques for both idea generation (Creativity) and converting those ideas into reality (Innovation). Like most tools these techniques all have their good and bad points. I like to think of these creativity and innovation techniques as tools in a toolbox in much the same way as my toolbox at home for DIY. It has a saw, spanner, hammer, knife and all sorts of other things in it, they are all very useful, but you have to pick the right tool (creativity / Innovation technique) for each job. This site will try and provide a little guidance along with each tool to let you know whether it's best used for cutting paper or putting in nails. For the future, the aim is to also have sub-categories which will identify Techniques for; Problem Definition - including problem analysis, redifinition, and all aspects associated with defining the problem clearly. Subcategories

Thinking Methods: Creative Problem Solving They further divided the six stages into three phases, as follows: 1. Exploring the Challenge (Objective Finding, Fact Finding, and Problem Finding), Generating Ideas (Idea Finding), and Preparing for Action (Solution Finding and Acceptance Finding). Description: Since the arrival of the now classical Osborn-Parnes structure, any number of academic and business entities have re-sorted and renamed the stages and phases of what we now call the Creative Problem Solving Process (CPS). However, the originators' fundamental approach remains in tact. The Creative Problem Solving Institute of Buffalo, New York, has finessed the Osborn-Parnes process to include a divergent and a convergent stage within each of the six stages. In his 1988 book, Techniques of Structured Problems, Arthur B. Mess FindingData FindingProblem FindingIdea FindingSolution Finding Where to Learn CPS

Creativity techniques Creativity techniques are methods that encourage creative actions, whether in the arts or sciences. They focus on a variety of aspects of creativity, including techniques for idea generation and divergent thinking, methods of re-framing problems, changes in the affective environment and so on. They can be used as part of problem solving, artistic expression, or therapy. Some techniques require groups of two or more people while other techniques can be accomplished alone. Aleatory techniques[edit] Aleatoricism is the incorporation of chance (random elements) into the process of creation, especially the creation of art or media. In short, aleatoricism is a way to introduce new thoughts or ideas into a creative process. Improvisation[edit] Improvisation is a creative process which can be spoken, written, or composed without prior preparation.[1] Improvisation, also called extemporization, can lead to the discovery of new ways to act, new patterns of thought and practices, or new structures.