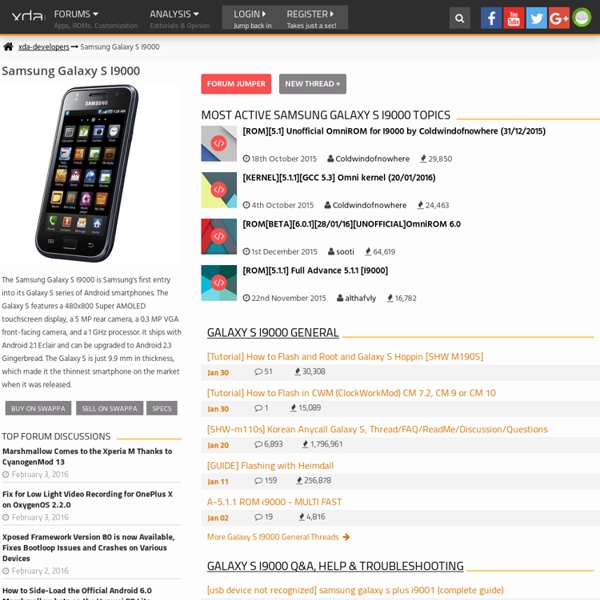 Samsung Galaxy S Pro : un grand smartphone Android à clavier cou [WINDOWS APP] Kies Registry Patcher 1.7.0.0, patch registry on latest Kies [WINDOWS APP] Kies 2.0 Registry Patcher 1.8.0.0, patch registry on latest Kies This tool is was designed in order to easily patch the registry to force Kies to update your Galaxy S. This latest version of patcher works even with latest Kies (2.0.0.11014_49_2), all you have to do is to spoof your firmware version to and older one, you can even spoof the product code in order to change it. The new spoof system works differently from the older patching system, it allow you to use the original dll of kies and works on latest Kies; It should even be future-proof. IMPORTANT NOTE: Patcher Version 1.8 doesn't fully work yet. When I built it i only partially tested. VERSIONS: Patcher Version 1.7 works with Kies 1.x, while Version 1.8 works from 2.0 PRELIMINARY NOTE: [WARNING!] LAGFIX USERS: [WARNING!] 1) Download latest Kies Registry Patcher, tool is attachment. 2) Update Kies to 2.0.0.11014_49_2. 4) Launch Kies and connect your phone; Wait for Kies to recognize it properly. 1.3.1.0 Update:

[Guide] The Complete Beginner's Guide to installing custom ROMs on the HANNSpad I accept no responsibility for anything going wrong with your HANNSpad. Use this guide at your own risk. I have installed and reinstalled every HANNSpad compatible ROM about 5/6 times each before finally deciding to write this guide. Please DO NOT PM me asking for help. If this is your first time then I strongly suggest you follow this guide exactly - so that you become familiar with the process. You have your HANNSpad and everything works fine, so why should you flash it with a custom ROM? I got the HannsPad mainly for the fact that it could be flashed with custom ROMs. I decided to do this guide because there were no really EASY guides out there. Please excuse the handheld screenshots, it's the best I could do - Flashing your HANNSpad is totally new and you have no clue how to do it. - Your HANNSpad is running the stock/default ROM that it shipped with. - Nothing has been modified with your HANNSpad. ClockWorkMod Recovery v4.0.1.4 (CWM) GtabComb Beta 3.3_bl1.2 ab_kernel3.zip 1. 2. 3. 4. 5.

Samsung Galaxy S [Guide] Hannspad Rooting (Updated August 4th 2011) Hannspad Rooting Guide (v2 August 4th 2011) This guide assumes you have a fully stock Hannspad. Easy WayDownload these 2 files: 1. That's it, your tablet is now rooted! Hard Way First step is to install the CWM recovery image (modified by roebeet). Download it here: Plug the tablets USB into your computer, I recommend plugging the power cord in as well. 1. Step 2RootingUSB driver files: Note for this method you will need adb installed and working. If you have problems getting adb running you likely had the same issue as me, and windows had installed default drivers for the tablet without asking. Download the latest version of SuperOneClick root here: If you're running Vista/Windows 7 make sure to run it as administrator. 1. Market + Google Apps 1. adb shell su mount -o rw,remount -t yaffs2 /dev/block/mtdblock3 /system 7. 1.

Samsung Galaxy S Power Pack surfaces in German newsletter We have already talked about a slew of official Galaxy S accessories that surfaced early this month along with the new smartphone. Another new accessory for the Galaxy S has surfaced in a German Samsung Newsletter that might be just what some users are looking for. If you find the battery on your Galaxy S doesn’t last as long as you want it too, the new Galaxy S Power Pack EBB-U10 might be just the thing for you. The device is a carry case to protect your phone that also has a battery inside for more run time. Supposedly, the case adds an additional 8.5 hours of talk time and 500 more hours of standby time. I don’t read German, but it appears the thing weighs 70 grams and has a LED capacity indicator.

[GUIDE] Step by Step ROM Firmware Upgrade &amp; Migration to Froyo 2.2 [JL2] Bell I9000M Retired Forum Moderator - OP Thanks Meter 1571 Posts: 11,517 Join Date: May 2008 Location: buried under loads of work IRL Froyo Quick Review Froyo is Awesome! After upgrading to 2.2, i found a whole bunch of apps which was no longer necessary, as many of the status/features i wanted already came build in, or allowed other apps which i already had installed before to work even better by unlocking some of its feature that was only accessible on 2.2, but disabled on 2.1 the JK3 came with all the Broadware from Bell, had to uninstall a bunch of them Overall the phone now runs really really smooth, specially when Installing Apps on Android Market and doing other stuff, it no longer hangs for a few sec until it finishes the install back in 2.1 the phone was working great, but everytime an App is installed via Market, it will hang abit until it's done installing, and sometimes it gets very annoying when you have like 20 apps updates to install no changes to CoPilot, it still work just perfect as usual

WiimoteController | Android Universe, C.C.P. Cre@ions WiimoteController is an application which allows a Wii remote to connect to your Android phone. You can then use the Wii remote to control various apps. IMPORTANT! This application does not work with most HTC Devices that have Sense UI. It doesn't matter if the Sense is turned on or not, the problem seems to be much deeper. Usage: turn bluetooth on * run the app if this is your first run, hit Yes. (* note: pairing with the wiimote is not required! ( ** if the wiimote's LEDs only flash, but don't blink, then turn of your Wii console (you might have to unplug it from the wall), or go out of the console's bluetooth range with the wiimote, or instead of 1 and 2, use the red Sync button in the battery compartment) ( *** if the app displays an error message after you tap the first button then your device might not be supported. A note about yongzh's emulators (Gensoid/SNesoid/Nesoid/GameBoid): custom input methods don't work with yongzh's emulators by default. See the video of how it works: