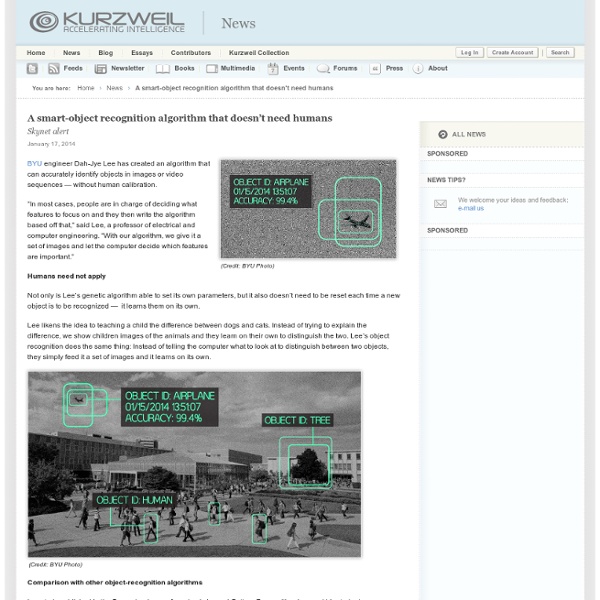 (Credit: BYU Photo) BYU engineer Dah-Jye Lee has created an algorithm that can accurately identify objects in images or video sequences — without human calibration. “In most cases, people are in charge of deciding what features to focus on and they then write the algorithm based off that,” said Lee, a professor of electrical and computer engineering. “With our algorithm, we give it a set of images and let the computer decide which features are important.” Humans need not apply Not only is Lee’s genetic algorithm able to set its own parameters, but it also doesn’t need to be reset each time a new object is to be recognized — it learns them on its own. Lee likens the idea to teaching a child the difference between dogs and cats. Comparison with other object-recognition algorithms In a study published in the December issue of academic journal Pattern Recognition, Lee and his students demonstrate both the independent ability and accuracy of their “ECO features” genetic algorithm.

Vertical farms sprouting all over the world - tech - 16 January 2014 Leader: "Fruit and veg, fresh from the skyscraper" URBAN warehouses, derelict buildings and high-rises are the last places you'd expect to find the seeds of a green revolution. But from Singapore to Scranton, Pennsylvania, "vertical farms" are promising a new, environmentally friendly way to feed the rapidly swelling populations of cities worldwide. In March, the world's largest vertical farm is set to open up shop in Scranton. Vertical farms aim to avoid the problems inherent in growing food crops in drought-and-disease-prone fields many hundreds of kilometres from the population centres in which they will be consumed. The plant racks in a vertical farm can be fed nutrients by water-conserving, soil-free hydroponic systems and lit by LEDs that mimic sunlight. The whole apparatus can be monitored from a farmer's smartphone (see "Farming from afar"), says GSF's R&D manager, Daniel Kluko. GSF's first farm was inspired by the long-term drought that has been afflicting many parts of the US.

The Rich and Their Robots Are About to Make Half the World's Jobs Disappear Two hugely important statistics concerning the future of employment as we know it made waves recently: 1. 85 people alone command as much wealth as the poorest half of the world. 2. 47 percent of the world's currently existing jobs are likely to be automated over the next two decades. Combined, those two stats portend a quickly-exacerbating dystopia. As more and more automated machinery (robots, if you like) are brought in to generate efficiency gains for companies, more and more jobs will be displaced, and more and more income will accumulate higher up the corporate ladder. That's according to a 2013 Oxford study, which was highlighted in this week's Economist cover story. And, as is historically the case, the capitalists eat the benefits. The prosperity unleashed by the digital revolution has gone overwhelmingly to the owners of capital and the highest-skilled workers. Those trends aren't just occurring in the US, either.

Google buys AI firm DeepMind to boost image search - tech - 27 January 2014 Google's shopping spree is far from over. Today the firm confirmed it has purchased DeepMind Technologies, a machine-learning company based in London, for $400 million. The acquisition of the AI firm follows Google's purchase of eight advanced robotics companies in December and the smart thermostat maker Nest Labs earlier this month. It is not hard to see why Google might be interested. DeepMind Technologies employs machine-learning engineers led by Demis Hassabis, a former commercial video-game coder turned artificial-intelligence expert and neuroscientist. Last month, DeepMind revealed that it had developed an AI algorithm that was able to learn how to play iconic early video games like Breakout and Pong. Although Google has not elaborated on why it has bought the firm – and on past form it probably won't – two US patents filed by DeepMind Technologies on 16 January offer some clues. More From New Scientist Is this evidence that we can see the future? More from the web Recommended by

Virtual tailor measures you up for perfect online shop - tech - 03 January 2014 Body scanners and virtual fitting rooms could solve the common problem of clothes ordered online being too baggy or tight IT'S the curse of online clothes shopping. You come across a shirt you simply must have, only to find that what you receive doesn't fit despite being in your size. A new wave of start-ups are finding clever ways to address the problem. To set up the fitting room, developers run through most of the size-shape combinations the dummies can assume, and take several thousand photos of them dressed in every available size of each shirt or dress, from extra small to XXXL. Another start-up wants to redefine our system for sizing clothes. To arrive at these, Hornbuckle hired another company to analyse 200,000 measurements of men's bodies, looking for correlations. Arden Reed, a New York-based start-up, wants to take this personalised approach a step further with its bespoke suits. The scanner has ventured to Boston and Washington DC, and will debut in Miami this year.

Eight ways robots stole our jobs in 2013 If we talked about nothing else in 2013 -- and, all right, 2012, too -- we talked about the question of whether technology is going to take all our jobs. This latest surge of the age-old debate seems to have abated, for now, with the anti-robot contingent in America somewhat mollified by the promise that additional automation may be the one advance that allows for manufacturing jobs to return from overseas and relieves humans of the most dangerous and unpleasant tasks. Theoretically, the robotic gospel goes, that talent is then freed up for more fulfilling and productive work. (Hint: The more "creative" and "social" you are, the more likely you are to survive.) Either way, it's worth looking at the different ways automation began rendering new classes of jobs obsolete this year. Amazon's new robots don't go on strike. 1. Back in 2012, Amazon acquired Kiva Systems, a maker of robots that can be programmed to pick up online orders in a warehouse and shuttle them to their departure points.

ButtonMasher: AI takes on humans to create video game - tech - 02 January 2014 Read full article Continue reading page |1|2 ButtonMasher is our new column about video games and gaming culture – from the offbeat fringes to the cutting-edge innovations behind the latest blockbusters Making video games that are engaging and creative is always a challenge. That's what Mike Cook of Goldsmiths, University of London, is investigating with Angelina, his AI game designer. "I can safely say that the game created by Angelina has better gameplay and graphics than several other entries," says Alan Zucconi, a game developer and researcher at Imperial College London who also took part. Cook is developing Angelina as part of his work on computational creativity – looking at whether software can be made to do things that would be considered creative if done by a human. Angelina has created many games in controlled situations, but this is the first time an AI has competed against humans in such a setting. But Angelina does fall down on the theme. More From New Scientist (YouTube)

The mystery of Google's sudden robotics splurge - tech - 16 December 2013 So why is Google suddenly so interested in robots? That's the question everyone's asking after it emerged this month that the internet giant has quietly amassed a portfolio of eight advanced-robotics firms. Google is describing the venture as partly a long term "moonshot" project – the name given to its more outlandish or ambitious ideas, such as its self-driving car or broadband via high-altitude balloons. But it also says it aims to launch a raft of robotics products in the short term. Based in the US and Japan, the new acquisitions make diverse products, ranging from walking humanoids, to many-legged, animal-like packhorses for the military, to assembly robots, machine-vision systems and robotic special-effects movie cameras. Are they creating a cloud-powered humanoid who uses Google Glass? Andy Rubin isn't saying. Robot army Google is not alone in its foray into robotics. Fingers in many pies More From New Scientist Banish jet lag with a handy mathematical scheduler (New Scientist)

Wikipedia-size maths proof too big for humans to check - physics-math - 17 February 2014 If no human can check a proof of a theorem, does it really count as mathematics? That's the intriguing question raised by the latest computer-assisted proof. It is as large as the entire content of Wikipedia, making it unlikely that will ever be checked by a human being. "It might be that somehow we have hit statements which are essentially non-human mathematics," says Alexei Lisitsa of the University of Liverpool, UK, who came up with the proof together with colleague Boris Konev. The proof is a significant step towards solving a long-standing puzzle known as the Erdős discrepancy problem. Imagine a random, infinite sequence of numbers containing nothing but +1s and -1s. Adding up the numbers in a sub-sequence gives a figure called the discrepancy, which acts as a measure of the structure of the sub-sequence and in turn the infinite sequence, as compared with a uniform ideal. Wikipedia-size proof Now Konev and Lisitsa have used a computer to move things on. Non-human mathematics