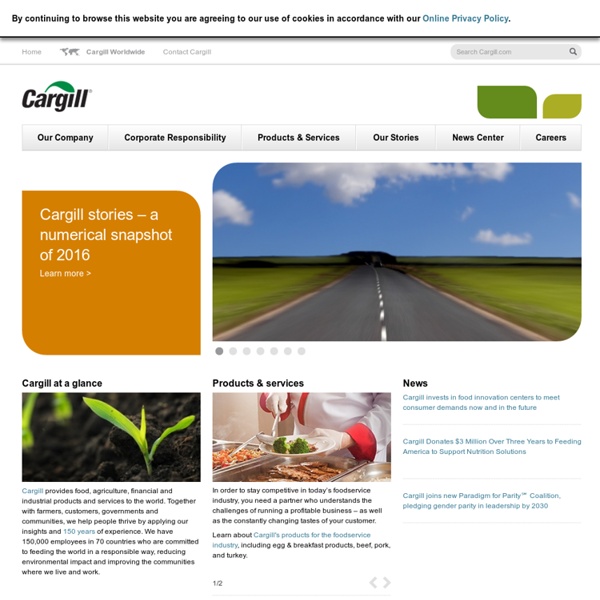 Food Processing Top 100 Food and Beverage Companies Food Processing's annual list of the top 100 food and beverage companies in the United States and Canada is the only list of its kind. Nowhere else can you sort manufacturers by sales, rank or income all in one place. Our 38th annual Top 100© list ranks food and beverage processors based on their sales of value-added, consumer-ready goods that were processed in U.S. and Canadian facilities.

Agribusiness In agriculture, agribusiness is the business of agricultural production. It includes agrichemicals, breeding, crop production (farming and contract farming), distribution,farm machinery, processing, and seed supply, as well as marketing and retail sales. Within the agriculture industry, "agribusiness" is used simply as a portmanteau of agriculture and business, referring to the range of activities and disciplines encompassed by modern food production. List of USDA Accredited Certifying Agents Looking for an agent to certify your farm or business to the USDA organic standards? Eighty two certifying agents are currently USDA-accredited and authorized to certify operations to the USDA organic standards. Of these, 49 are based in the U.S. and 33 are based in foreign countries. Most certifying agents are directly accredited by the USDA National Organic Program (NOP). Twenty additional certifying agents are authorized through recognition agreements between the U.S. and foreign governments.

a-gray-area-in-regulation-of-genetically-modified-crops Photo Its first attempt to develop genetically engineered grass ended disastrously for the Scotts Miracle-Gro Company. The grass escaped into the wild from test plots in Oregon in 2003, dooming the chances that the government would approve the product for commercial use. Yet Scotts is once again developing genetically modified grass that would need less mowing, be a deeper green and be resistant to damage from the popular weedkiller Roundup. But this time the grass will not need federal approval before it can be field-tested and marketed. Claas Home The 800 Series offers four new models: JAGUAR 880 (626 hp), JAGUAR 860 (516 hp), JAGUAR 850 (462 hp), and the JAGUAR 840 (408 hp). Mercedes inline 6 engines deliver Tier 4f power to the entire line. The top-end 880 offers a power curve comparable to the JAGUAR 960, while the JAGUAR 840 – the least powerful offering in the new JAGUAR 800 series – fits a niche for those who don’t require quite as much power as the base JAGUAR 930. The same DYNAMIC POWER option offered on the 900 Series – a system that modifies engine output and fuel consumption based on operating conditions – is also an available option on the JAGUAR 880 and 860.

List of agricultural machinery Agricultural equipment is any kind of machinery used on a farm to help with farming. The best-known example of this kind is the tractor. Traction and power[edit] Soil cultivation[edit] Planting[edit] A plough in action in South Africa. Agriculture Agriculture, also called farming or husbandry, is the cultivation of animals, plants, fungi, and other life forms for food, fiber, biofuel, medicinals and other products used to sustain and enhance human life.[1] Agriculture was the key development in the rise of sedentary human civilization, whereby farming of domesticated species created food surpluses that nurtured the development of civilization. The study of agriculture is known as agricultural science. The history of agriculture dates back thousands of years, and its development has been driven and defined by greatly different climates, cultures, and technologies. However, all farming generally relies on techniques to expand and maintain the lands that are suitable for raising domesticated species. For plants, this usually requires some form of irrigation, although there are methods of dryland farming. Until the Industrial Revolution, the vast majority of the human population labored in agriculture.

Unhappy meal. The European Food Safety Authority's independence problem Download full report - Read press release In recent years, the European Food Safety Authority (EFSA) has come under sustained criticism from the European Parliament, NGOs and the media over conflicts of interest of those sitting on its scientific panels. These experts play a crucial role in decisions key to the health and safety of Europe's food supply chain. Yet some were shown to have commercial ties with the industries whose profits depend on these products, undermining the credibility of the organisation's scientific output on issues such as food additives and GMOs. After an initial phase of denying there was a problem, EFSA has developed – in its own words – “a new, comprehensive and sophisticated” policy on independence. The renewal of eight of its ten scientific panels in the course of Spring 2012 was the opportunity for the agency to start implementing its new policy to vet the participants for conflicts of interest – and regain credibility.

Biochar Biochar created through the pyrolysis process. History[edit] Left - a nutrient-poor oxisol; right - an oxisol transformed into fertile terra preta using biochar Biodynamic agriculture Biodynamic agriculture is a method of organic farming originally developed by Rudolf Steiner that employs what proponents describe as "a holistic understanding of agricultural processes".[1]:145 One of the first sustainable agriculture movements,[2][3][4] it treats soil fertility, plant growth, and livestock care as ecologically interrelated tasks,[5][6][7] emphasizing spiritual and mystical perspectives. Proponents of biodynamic agriculture, including Steiner, have characterized it as "spiritual science" as part of the larger anthroposophy movement.[1][2][8] Biodynamics has much in common with other organic approaches – it emphasizes the use of manures and composts and excludes the use of artificial chemicals on soil and plants. As of 2011 biodynamic techniques were used on 142,482 hectares in 47 countries. Germany accounts for 45% of the global total;[9] the remainder average 1750 ha per country. History[edit]