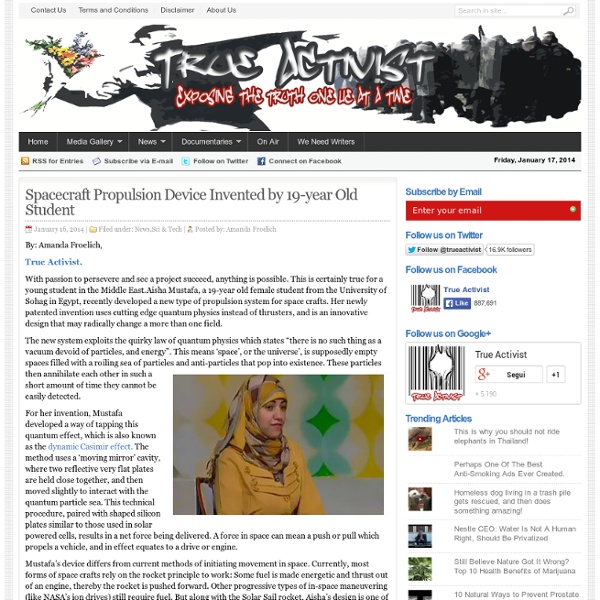 By: Amanda Froelich, True Activist. With passion to persevere and see a project succeed, anything is possible. This is certainly true for a young student in the Middle East.Aisha Mustafa, a 19-year old female student from the University of Sohag in Egypt, recently developed a new type of propulsion system for space crafts. Her newly patented invention uses cutting edge quantum physics instead of thrusters, and is an innovative design that may radically change a more than one field. The new system exploits the quirky law of quantum physics which states “there is no such thing as a vacuum devoid of particles, and energy”. annihilate each other in such a short amount of time they cannot be easily detected. For her invention, Mustafa developed a way of tapping this quantum effect, which is also known as the dynamic Casimir effect. Mustafa’s device differs from current methods of initiating movement in space. The potential of this new design is enormous.

Keshe Foundation From PESWiki Page first featured July 19, 2009 Plasma Energy and Anti-Gravity Applications The Rodin Coil: Is It The Greatest Discovery of All Time? Free energy is easily one of the hottest topics in the world within alternative news. While mainstream news continues to ignore the growing interest around the subject, alternative news outlets are providing new information about the inventions, science, mathematics and suppression of free energy technologies. We even covered the subject in our new documentary The Collective Evolution III: The Shift The trouble with the advancement of free energy as it stands now lies in a couple clear areas. 1. The current corporate powers and systems of our world would lose mass amounts of profit and control over people if they no longer required them for their energy needs.

Simulations back up theory that Universe is a hologram Artist's impression by Markus Gann/Shutterstock At a black hole, Albert Einstein's theory of gravity apparently clashes with quantum physics, but that conflict could be solved if the Universe were a holographic projection. A team of physicists has provided some of the clearest evidence yet that our Universe could be just one big projection.

Award Search: Award#1362899 - Advanced Manufacturing Project-Learning in Focused Innovation (AMPLiFI) Award Abstract #1362899 Advanced Manufacturing Project-Learning in Focused Innovation (AMPLiFI) This project is creating a flexible technician education framework that draws on the experience of the National Network Manufacturing Institutes (NNMIs) to prepare the workforce for the advanced manufacturing technical occupations of the future. Child Rides EV Toy on Boyce Free Energy! A South African experimenter has modified an electrolysis circuit developed by Bob Boyce so that now it recharges his daughter's electric vehicle riding toy. What makes this remarkable is that the energy is not drawn from the wall but from the environment somehow. He's done this around 35 times now and knows of three replications of the effect by others. by Sterling D. Allan with Charles Couch and Watkykjy1Pure Energy Systems NewsCopyright © 2009 Riding for Free

Richard Obousy on Alcubierre and Casimir Warp Drives Dr. Richard Obousy describes an advanced space-propulsion concept based on modifying the local cosmological constant to facilitate an expansion/contraction of spacetime around a spacecraft to create an exotic form of field-propulsion. This idea is analogous to the Alcubierre bubble, but differs entirely in the approach, utilizing the physics of higher dimensional quantum field theory, instead of general relativity. "In the spirit of Morris, Thorne and Yurtsever these warp drives, provide an unique and inspiring opportunity to ask the question 'what constraints do the laws of physics place on the abilities of an arbitrarily advanced civilization'.

New Quantum Theory Could Explain the Flow of Time Cups of coffee cool, buildings crumble and stars fizzle out, physicists say, because of a strange quantum effect called “entanglement.” Photo: Stacy/Flickr Coffee cools, buildings crumble, eggs break and stars fizzle out in a universe that seems destined to degrade into a state of uniform drabness known as thermal equilibrium. The astronomer-philosopher Sir Arthur Eddington in 1927 cited the gradual dispersal of energy as evidence of an irreversible “arrow of time.” But to the bafflement of generations of physicists, the arrow of time does not seem to follow from the underlying laws of physics, which work the same going forward in time as in reverse.

Scientists improve microscopic batteries with homebuilt imaging analysis (Phys.org) —In a rare case of having their cake and eating it too, scientists from the National Institute of Standards and Technology (NIST) and other institutions have developed a toolset that allows them to explore the complex interior of tiny, multi-layered batteries they devised. It provides insight into the batteries' performance without destroying them—resulting in both a useful probe for scientists and a potential power source for micromachines. The microscopic lithium-ion batteries are created by taking a silicon wire a few micrometers long and covering it in successive layers of different materials.

the secret they can't kill. Bob Boyce's Story The man in the photo [right] is Bob Boyce. You probably have never heard of Bob until now. Some people obviously hoped you never would. Bob has just been diagnosed with a terminal cancer and it is likely that he will die before his breakthrough discovery is widely known. But we hope to change that with this story. 4. Discussion of German Field Propulsion Saucers 1 Some explanation has been attempted regarding the Schauberger models and the KM-2 rocket. From this point on, the discussion of German field propulsion saucers will move away from the areas centering around observed evidence and into areas of interpretation. Simulations back up theory that Universe is a hologram Artist's impression by Markus Gann/Shutterstock At a black hole, Albert Einstein's theory of gravity apparently clashes with quantum physics, but that conflict could be solved if the Universe were a holographic projection. A team of physicists has provided some of the clearest evidence yet that our Universe could be just one big projection.

Dr Paul LaViolette - Secret Space Program Dr. LaViolette is the first to predict that high intensity volleys of cosmic ray particles travel directly to our planet from distant sources in our Galaxy, a phenomenon now confirmed by scientific data. He is also the first to discover high concentrations of cosmic dust in Ice Age polar ice, indicating the occurrence of a global cosmic catastrophe in ancient times. Based on this work, he made predictions about the entry of interstellar dust into the solar system ten years before its confirmation in 1993 by data from the Ulysses spacecraft and by radar observations from New Zealand.

Pentagon Aliens - 05 Author’s Disclaimer In consideration of the author’s sale, and of the reader’s purchase or reading of this book, the purchaser or reader is hearby deemed to understand and agree to the following: First, it is recommended that a flying model be built and tested before proceeding further, as it would be very disappointing to build an elaborate saucer which doesn’t work. The fundamental principle is simple: to electromagnetically synthesize momentum, employing a high voltage D.C. brush discharge, in the direction of desired acceleration, to draw in and cause the exchange of ether carriers, which also brings in the tubes of electrical force, and to cause the tubes to dissolve in the conductors of the ship, which imparts momentum to the conductors, at 90 degrees to the electric current and magnetic inductance. The D.C. brush produces “negative (“hairy”) corona”, and the high frequency A.C. produces “positive (“cloudy”) corona”. 1.