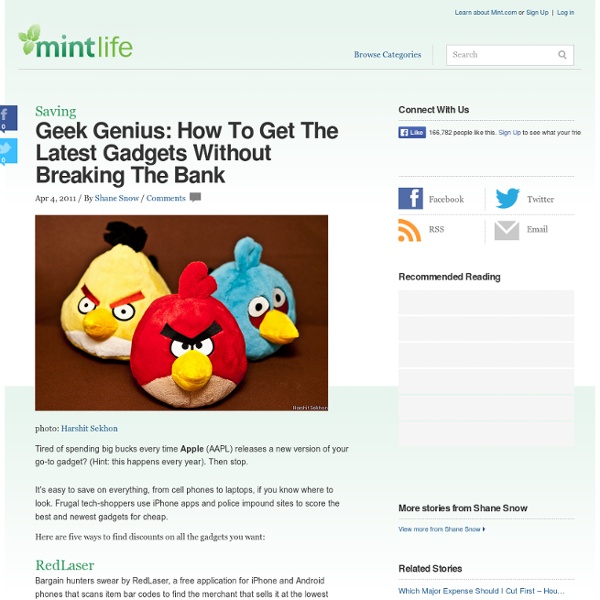 photo: Harshit Sekhon Tired of spending big bucks every time Apple (AAPL) releases a new version of your go-to gadget? (Hint: this happens every year). Then stop. It’s easy to save on everything, from cell phones to laptops, if you know where to look. Frugal tech-shoppers use iPhone apps and police impound sites to score the best and newest gadgets for cheap. Here are five ways to find discounts on all the gadgets you want: RedLaser Bargain hunters swear by RedLaser, a free application for iPhone and Android phones that scans item bar codes to find the merchant that sells it at the lowest price. ChinaBuye Where can you get a laptop for under $100? NexTag You’ve probably heard of NexTag, a price comparison site that now boasts 30 million users. Games Tester Loan Processing Specialist Sarah Horton knows a thing or two about saving money. Property Room Between drug busts and other police seizures, a whole lot of ownerless, high-ticket items end up in police custody.

Running IE on your Mac, for free via modern.ie Several years ago I figured out how to convert the Virtual PC images windows used to provide for Windows testing to VirtualBox format, that would run on the Mac. It was a long process but was the only way to legally(ish) test Windows for free on your Mac. This year Microsoft lauched modern.ie, where they providing Windows on free disk images compatible on Mac and Linux! Another improvement over the last couple years is how you can access servers running on the host system (i.e. your Mac) from the virtual version of Windows running in VirtualBox. Now it’s as simple as modifying your Windows hosts file. When the VirtualBox Guest Additions are installed (Devices > Install Guest Additions) you can access your Mac via the IP address: 10.0.2.2

List of Top Gear episodes Episodes are listed in order of their original U.K. air date along with featured cars, challenges, and guests. For more information on features and challenges included in each series, visit each series' respective page. Comprehensive lists of challenges and races can be found at Top Gear challenges and Top Gear Races. Overview[edit] Episodes[edit] Series One[edit]

10 Tech Concepts for 2011 - Technology Terms - Popular Mechanics - StumbleUpon 6 Optogenetics Until now, researchers looking to stimulate specific neurons had to rely on bursts of electricity—an imprecise and difficult-to-control technique. That's why the new field of optogenetics is so exciting. By combining fiberoptics and designer viruses, researchers can now stimulate neurons with a high degree of precision.

A Christian Evaluation of Mixed Martial Arts Preface: This blog post is long. Since Mixed Martial Arts is a fast-growing phenomenon, it deserves some thoughtful Christian reflection. And, since many people with strong opinions about it have very little knowledge of the sport, I’m trying in this post to not assume any level of understanding about the sport. For those who disagree with me, consider whether or not your online posts in reply would constitute verbally fighting against physical fighting and ask yourself why one would be so much more “holy” than the other?

How To Become A Hacker - StumbleUpon Copyright © 2001 Eric S. Raymond As editor of the Jargon File and author of a few other well-known documents of similar nature, I often get email requests from enthusiastic network newbies asking (in effect) "how can I learn to be a wizardly hacker?". How to protect your PC in the web's worst neighborhoods Your data. Your wallet. Your identity. In the darker corners of the internet, it’s all fair game, and disaster could be one unwitting click away. Protect yourself by learning about the web’s most common dangers, and how to avoid them.

When did potatoes become unpopular? 20 October 2011Last updated at 11:17 By Kate Dailey BBC News Magazine US senators easily approved a measure to forbid restrictions on potatoes served at school Potatoes have gone from nation-building superfoods to national pariahs. Why? This week, the US Congress foiled plans to limit the amount of potatoes served in school lunches. Rules proposed by the United States Department of Agriculture (USDA) stated that potatoes, along with other starchy vegetables like corn, peas, and lima beans, could be served in school cafeterias only twice a week.

Outlets of the Future aka in-wall USB Charger - StumbleUpon 1. Plug the Mini USB chargers into the outlets. Because the USB ports are off center I decided to put them both toward the center. I think it looked better than having them the same direction or both on the outside. 2. The absurdly simple guide to backing up your PC The first rule of PC Club is: Always, always back up. Thankfully, backing up your most important data is a cinch. It’s the getting off your rear to actually do it that stymies most people, myself included. We’ll discuss emotional motivation later. (You’ll laugh! You’ll cry!)

Book-A-Minute Classics Got another book report to do? English teachers have the inconsiderate habit of assigning mammoth-sized works of literature to read and then actually expecting you to do it. This wouldn't be so bad except that invariably the requisite reading is as boring as fly fishing in an empty lake. Half of those books don't even have discernible plots.

50 Kick-Ass Websites You Need to Know About It's time to update the entries in your browser's links toolbar. But with recent estimates putting the size of the internet at well more than 100 million distinct websites, it's getting harder and harder to get a handle on all the great stuff that's out there. That's why we've compiled this list.