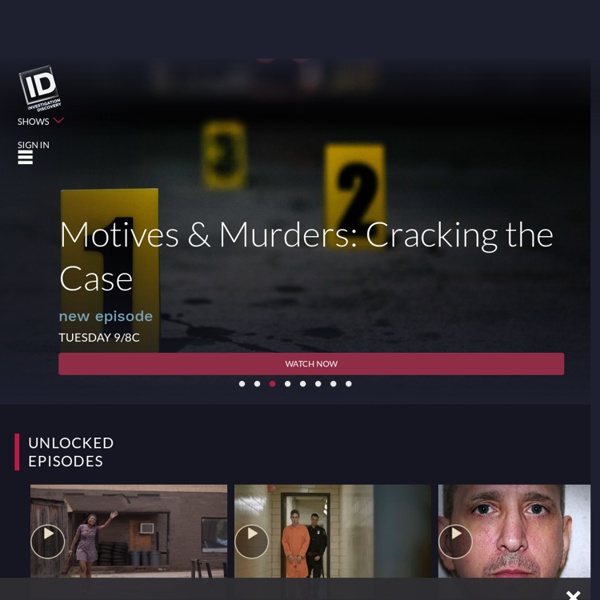 NOVA Injecting Stem Cells Directly Into the Brain Lets Stroke Patients Walk Again This technique could help repair stroke patients’ brains, bringing hope to those living with paralysis. From NOVA Next | Jun 7, 2016 Beauty in Physics, Synthetic Genomes, and More: Week in Review NOVA Next rounds up the best science stories for the week ending June 3, 2016. Criminal Psychology, Forensics, criminal profiling and Scams & Hoaxes - The Crime Library on truTV.com While it appears to be true that some people who immerse in horror imagery feel provoked to commit the same aggressive crimes they just viewed, it's also true that there is no evidence of a causal factor, and millions of people watch such films without feeling instigated to act. Some people process external images into aggressive behavior, others might gain catharsis, and still others remain altogether unaffected. A few become horror film makers or novelists. It's not easy to know just what effect a specific film might have. Whatever results, research shows that it has more to do with the viewer than the material viewed. It stands to reason that violent imagery will affect certain people in a way that inspires them to act out.

The Online Learning Blog from Study2U Supposedly browsing the internet requires more brain power than watching television. Although judging from some of the websites we’ve come across that assumption is cast into doubt. Here’s some of the sites we like that might get your brain to sit up and listen. Ted A conference that started in 1984 bringing together experts in technology, entertainment and design quickly grew into so much more. Titanic ~ The Unsinkable Ship and Halifax, Nova Scotia Titanic History On April 10, 1912, the RMS Titanic left Southampton, England on her maiden voyage. After stops at Cherbourg, France and Queenstown (now Cobh), Ireland, she steamed for New York, USA carrying over 2,200 passengers and crew. Four days later, on Sunday, April 14 at 11:40 pm, Titanic struck a giant iceberg and by 2:20 am on April 15, the “unsinkable ship” was gone. In less than three hours, the pride of the White Star Line had become one of the greatest marine disasters in recorded history.

Awe-inspiring scenes from Mother Nature Summer is the perfect time to get out and see how much nature has to offer. Photo from EarthAirFire You Might Also Like: Comments: Leave a reply: Coolest Archaeological Discoveries of 2014 Thanks to the careful work of archaeologists, we learned more in the past year about Stonehenge's hidden monuments, Richard III's gruesome death and King Tut's mummified erection. From the discovery of an ancient tomb in Greece to the first evidence of Neanderthal art, here are 10 of Live Science's favorite archaeology stories of 2014. 1. Stories about famous serial killers and murder cases at the Crime Library. on truTV.com The Frankford area of Philadelphia was once a town older than the City of Brotherly Love itself. At one time, it was a prosperous area, but by 1980 it had become a crime-ridden slum populated by prostitutes, junkies, and small businesses struggling to survive. This was the area that Sylvester Stallone selected as the setting for his film Rocky.

The Ancient and Mysterious Gobekli Tepe One of the standing stones of Gobekli Tepe Gobekli Tepe (Gobekli: Belly Tepe: Hill) is a site six miles outside of Urfa, Turkey that contains megalith circles. It was uncovered in 1994 by German archaeologist Klaus Schmidt. Since that time, Klaus and his team have uncovered at least seven large stone circles and they suspect that there are many more left under 22 acres of land yet to be excavated. What are these stones doing in this hill overlooking what must have once been a lush valley? Titanic's Unknown Child Given New, Final Identity Five days after the passenger ship the Titanic sank, the crew of the rescue ship Mackay-Bennett pulled the body of a fair-haired, roughly 2-year-old boy out of the Atlantic Ocean on April 21, 1912. Along with many other victims, his body went to a cemetery in Halifax, Nova Scotia, where the crew of the Mackay-Bennett had a headstone dedicated to the "unknown child" placed over his grave. When it sank, the Titanic took the lives of 1,497 of the 2,209 people aboard with it. Some bodies were recovered, but names remained elusive, while others are still missing. But researchers believe that they have finally resolved the identity of the unknown child -- concluding that he was 19-month-old Sidney Leslie Goodwin from England.

The 10 Most Disturbing Books Of All Time In my younger days if I heard a book or movie was disturbing or hard to handle I generally took that as a challenge. Most books generally turned out to not be too bad, but occasionally I’d come across something that would leave me with a sick feeling in my stomach for weeks. I’ve largely outgrown this “genre” of late, but here are my picks for the ten most disturbing books of all time.

5 most incredible discoveries of the week A preschool paleontologist and a Shakespearean announcement make the list: 4-Year-Old's Big Find in Texas: a Dino: For 4-year-old Wylie Brys, a chance dig in the dirt behind a Texas shopping center led to a giant discovery: the fossil of what could be a 100-million-year-old dinosaur. Scientists from SMU helped extract the fossil this week, seven months after Wylie's find, and they think it could be that of a rare land-dwelling nodosaur. Deadly time vortex appears over Antarctica Sector of erupting anomalies. Disturbing news has been leaking out from the giant continent at the bottom of the world. Some scientists manning lonely outposts under the drifting and shifting aurora are nearly paralyzed with fear. Their clipped reports are being reviewed by astonished superiors back in the home countries.

Isidor & Ida Straus: In the Name of Love Isidor Straus, 67, and his wife Ida, 63, almost always traveled together; in fact, they were rarely apart during their married life and wrote each other daily during periods of separation. The son of German immigrants who had settled in Georgia, Isidor met Ida when he and his brother moved to New York City following the Civil War. Isidor arrived penniless in New York because he had paid every one of his debts before he left Talbotton, Georgia, even though standard practice at the time was not to honor the suddenly worthless Confederate scrip. Soon, though, Isidor and his brother Nathan became involved in the firm of R.H. Macy & Co., and eventually acquired it. Isidor also served as a New York congressman from 1895-97. The 13 scariest books of all time NOT written by Stephen King Yes, we all know King is the Sultan of Scare, and that books like The Shining, Salem's Lot, and It will make you quake in your fuzzy slippers. But here are 13 books that'll start the shivers while spreading the wealth. SILENCE OF THE LAMBS Thomas Harris This isn't the first time we'd meet the psychopathic Hannibal Lecter—that'd be Red Dragon—but it was the most eerie. And what's more, he wasn't the only serial baddie at work: Buffalo Bill took his share of trophies as Silence of the Lambs worked its way into the public's collective cerebral cortex.