The Online Destination for Generation Y 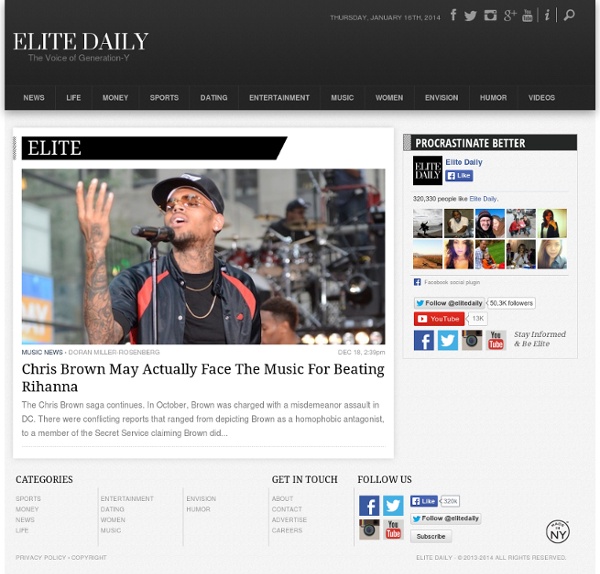 online magazine of fresh kicks, art, clothes, culture, and ideas Kicks Nikestore to Restock a Ton of Air Jordan Retros It was a terrible & great weekend for Jordan Brand lovers. On the one hand there was a restock on Nikestore that was supposed to go down, and frustrations arose when the website was not cooperating. Nike then announced that the restock release would be postponed. The good side is that we got a look at all the different retros they will be restocking, and we know that they will not only be size 15 and up *cough, cough.. 123 Inspiration The Art of Manliness Acne/Blemish Covering Make-up Acne/Blemish Covering Make-up I've had a lot of requests from people who suffer from acne asking me to film a tutorial on the best way to cover their skin with make-up, so I hope that all of you who have been holding out for it find it useful. With the help of my gorgeous (and brave to be filmed in super HD with no make-up!) model Madeline, this film shows you how I do it, and follows the way that I used make-up to cover my own acne when I had it in my 20s.

Ink Tank - Make words not war The ten greatest short story writers of the twenty-first century? What, we scoff, only ten? After all, the century’s fourteen already – that’s enough time to compile a list twice as long as this one! 艺术 品 Mind Hacks THE COVETED — be stylish Many years ago, my husband and I were at the Vintage Fashion Expo, and while there I thought I would get the “perfect” leopard print coat. You know, that vintage leopard print coat every woman should have in her wardrobe. As I pulled out a leopard print coat which I thought would be the “one” my husband put his hand on my arm, and said, “Nooooooooo.

Movies Screen Junkies Honest Trailers – The Hunger Games: Catching Fire HOME > MOVIES >Genres Best & Worst Video Game Movies Honest Trailers – 300 Top Ten Cult Fashion Documentaries In anticipation of the forthcoming documentary Mademoiselle C, which reveals the candid life of Carine Roitfeld, we chart the underexposed documentaries that have given us access to private codes and rituals of the fashion world. From Leigh Bowery to Don Letts, these are the cult moments that will always remain relevant. The cult at its finest: as Yohji Yamamoto prepares for an upcoming show in Paris, Wim Wenders captures the reticent designer in what is commonly a habitually private scene. An insight not just into the show, but the contemplation of the creative process: cities, cinema and identity that all play a definitive role in the final outcome. Leigh Bowery: indisputably an embodiment of the 1980's club scene in London and a provocative influence for a generation of artists.