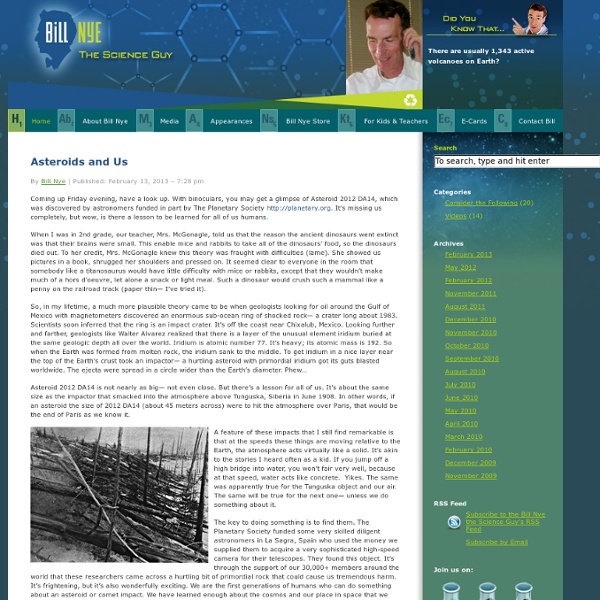 By Bill Nye | Published: February 15, 2013 – 4:00 pm My O my, wow… the 7,000-ton meteor over the Chelyabinsk region slammed into our atmosphere at 15,000 km per hour (33,000 miles an hour). Witnesses could see the flash of light 500 kilometers away. It was probably 15-meters (50 feet) across. When these things hit the atmosphere they just blow up. It’s not combustion, at least at first; it’s a rock slamming into something air so hard, that it disintegrates.

Science Fair Projects This is selection of ideas for 1st grade science fair projects with short project descriptions or examples as well as links to the actual science fair projects. Some of this ideas could also be used for 2nd and 3rd grades (and vice versa). Also some second grade science project ideas and third grade project ideas could be used in the first grade so check them out. At this age science projects resemble either simple games or magic tricks. Then unlike the magician you should try to explain what's going on. The goal of parents/teacher here is to help with organization of the project and experiment setup, provide simple explanation of the sciencenproject subject, and - entertain kids!

Spider Silk Is Strong Because It's Smart Spider silk is well known for some spectacular properties. It is stronger than steel and tougher than Kevlar yet flexible enough to be spun into a wide variety of shapes. New research shows that the material is not only strong but also smart. “Spider silk has a particular way of softening and then being stiff that is really essential for it to function properly,” said engineer Markus J. Wallpaper Videos See the universe come to life via animations, scientific visualizations, expert commentary, and more. Dream - www.legacyproject.org You're whisked away on a colorful journey of a lifetime. Whoosh through the teddy bears and castles of childhood. Whoosh again into the labyrinths and mountains of adolescence and adulthood.

Reframing and Refining the Worksheet Worksheets matter! I know we hear a lot of talking points that tell us to get rid of them, but I think it's much more complicated than that. That call for "no more worksheets" comes from a place where that is all there is. By that I mean classrooms where students do nothing but worksheets.

Squirrel Proof Bird Feeder Ever since purchasing my first tube bird feeder I've found myself constantly at war with squirrels. I've tried various strategies; baffles, elaborate ways of hanging feeders from trees, separate squirrel feeders, dousing the bird seed with a hot pepper wash, etc.. all of which proved to be ineffective. I love nature, however it got to a point where 14 squirrels were ravaging the bird seed a day, and I stopped feeding the birds. I thought my bird feeding days were over, however after some much needed additional research I was able to design / build a very affordable squirrel proof bird feeder that really works! I have been so pleased with the design that I now have 3 such feeders in my yard, and built a 4th for my brother in order to put together this instructable. There are some guidelines below that need to be followed to ensure that squirrels cannot gain access, though they are fairly obvious as this feeder has a lower bottom side baffle.

Study shows brain flexibility, gives hope for natural-feeling neuroprosthetics Opening the door to the development of thought-controlled prosthetic devices to help people with spinal cord injuries, amputations and other impairments, neuroscientists at the University of California, Berkeley, and the Champalimaud Center for the Unknown in Portugal have demonstrated that the brain is more flexible and trainable than previously thought. Their new study, published March 4 in the advanced online publication of the journal Nature, shows that through a process called plasticity, parts of the brain can be trained to do something they normally do not do. The same brain circuits employed in the learning of motor skills, such as riding a bike or driving a car, can be used to master purely mental tasks, even arbitrary ones. Over the past decade, tapping into brain waves to control disembodied objects has moved out of the realm of parlor tricks and parapsychology and into the emerging field of neuroprosthetics. "This is something that is not natural for the rats," said Costa.

Lesson Plans - Xpeditions @ nationalgeographic.com Xpeditions is now archived in National Geographic Education's new website—natgeoed.org If you liked Xpeditions, you'll love the new media-rich natgeoed.org. Explore the new site now for activities, maps, interactives, videos, homework help, and more! www.natgeoed.org Please note: to search for Xpeditions content, check the “include archive” filter. Nat Geo Education Blog Ideas that Work In this Q-and-A, Scott Burdick, principal at Pine Valley Elementary School in South Dayton, N.Y., discusses how his school uses data and technology to help personalize student learning in math. How is your school/district personalizing learning in the math classroom to ensure students are on a path to college and career readiness? We’ve implemented an adaptive diagnostic assessment tool to support our need to get actionable data about each student. After students are assessed through our online adaptive diagnostic assessment, teachers get reports on the skills each student needs to work on. Having detailed assessment data like this from i-Ready® allows the teacher to provide a personalized instructional plan via online and offline lessons and which helps support a blended learning approach. English language learners comprise the most rapidly growing segment of students in K-12.

'Grassroots' neurons wire and fire together for dominance in the brain (Medical Xpress)—Inside the brain, an unpredictable race—like a political campaign—is being run. Multiple candidates, each with a network of supporters, have organized themselves into various left- and right-wing clusters—like grassroots political teams working feverishly to reinforce a vision that bands them together. While scientists know that neurons in the brain anatomically organize themselves into these network camps, or clusters, the implications of such groupings on neural dynamics have remained unclear until now.

Discovery of gatekeeper nerve cells explains the effect of nicotine on learning and memory Swedish researchers at Uppsala University have, together with Brazilian collaborators, discovered a new group of nerve cells that regulate processes of learning and memory. These cells act as gatekeepers and carry a receptor for nicotine, which can explain our ability to remember and sort information. The discovery of the gatekeeper cells, which are part of a memory network together with several other nerve cells in the hippocampus, reveal new fundamental knowledge about learning and memory. The study is published today in Nature Neuroscience. The hippocampus is an area of the brain that is important for consolidation of information into memories and helps us to learn new things. The newly discovered gatekeeper nerve cells, also called OLM-alpha2 cells, provide an explanation to how the flow of information is controlled in the hippocampus.

Journal home : Nature Raphael Lis, Charles C. Karrasch, Michael G. Poulos, Balvir Kunar, David Redmond, Jose G. Barcia Duran, Chaitanya R. Badwe, William Schachterle, Michael Ginsberg, Jenny Xiang, Arash Rafii Tabrizi, Koji Shido, Zev Rosenwaks, Olivier Elemento, Nancy A. Controversial research outlines physics behind how forests may bring rain According to a controversial theory, forests—such as this one in Borneo—drive winds bringing rain from the coasts to continental interiors. Photo by: Rhett A. Butler. It took over two-and-a-half-years for the journal Atmospheric Chemistry and Physics to finally accept a paper outlining a new meteorological hypothesis in which condensation, not temperature, drives winds. If proven correct, the hypothesis could have massive ramifications on global policy—not to mention meteorology—as essentially the hypothesis means that the world's forest play a major role in driving precipitation from the coast into a continent's interior.