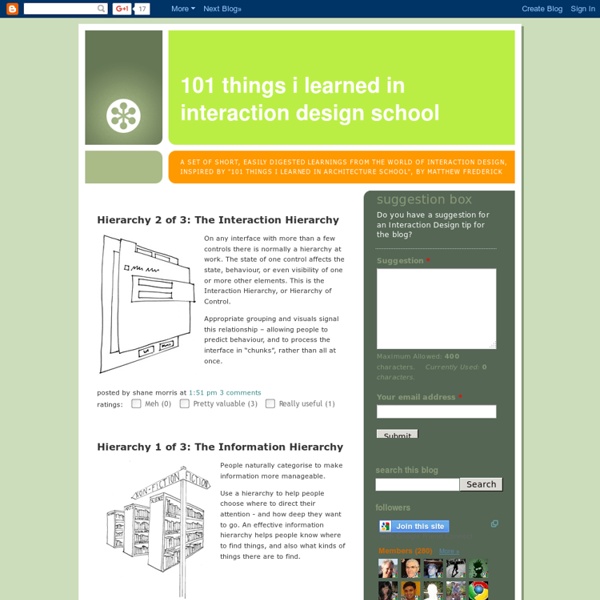 52 Weeks of UX The user experience is made up of all the interactions a person has with your brand, company, or organization. This may include interactions with your software, your web site, your call center, an advertisement, with a sticker on someone else’s computer, with a mobile application, with your Twitter account, with you over email, maybe even face-to-face. The sum total of these interactions over time is the user experience. The interaction designer plans for these moments. Part of their responsibility is to make all interactions positive, and includes aspects of the software, the copy-writing, the graphics, layout, flows, physical experiences. It’s a shame when one part of the experience is top notch and another is dreadful. User experience spans multiple practices. Web designers, traditionally secure in the role of page creators, now have a wider purview.

NASA launches interactive website to design interplanetary missions A small group of engineers at NASA's Ames Research Center, Moffett Field, Calif., have launched a new web-based tool for scientists and engineers to use when designing spacecraft trajectories to interplanetary destinations. The Trajectory Browser, as the web application is called, can provide an instantaneous assessment of the launch date, time and flight path requirements for future missions to asteroids, comets and planets for the next 25 years. "The Trajectory Browser website is best used as a first-cut tool to assess the existence of trajectories to small bodies and planets and provide ball-park values on launch date, duration and trajectory requirements," said Cyrus Foster, an aerospace engineer at the NASA Ames Mission Design Center and lead developer of the Trajectory Browser. After specifying the destination, a user then enters whether the mission will be one-way or round-trip, and include a flyby or rendezvous of the destination.

User laziness = user smartness, and why this is really important. A blog by Harry Brignull, User Experience Designer & Consultant — A blog by Harry Brignull, User Experience Designer & Consultant Note: This post might be a little dated. It was published in November 2008. User research is a funny thing. When you see users rushing through your user interface without stopping to think, or skipping through huge swathes of your lovingly prepared copy, it’s tempting to think of them as lazy sods. It’s true. It’s not negative. To quote Philip Johnson Laird (one of my favourite cognitive scientists): A calculator blindly follows the rules for multiplication or addition. The concept of productive laziness forms a valuable underpinning for our understanding of theories like information foraging, information scent, scan reading, and generally of user behaviour online. To put it simply: we are in the business of enabling users to be productively lazy in new and useful ways.

An Interactive Map Of British Casualties In Afghanistan Ever noticed how news of one death can cause more emotions than news of a hundred deaths? Chalk it up to the brain’s ability to shield us from strong feelings, or simply an inability to comprehend suffering on that level--after a certain point, people become numbers, especially on the news or in the papers. After seeing reports of the ongoing causalities amongst British troops in Afghanistan, a London creative agency called LONO wanted to offer the public a different medium through which to understand the numbers. In the interactive graphic, years are represented in concentric circles, with months marked in pie slices. Lonergan and his team have no overt political opinions about the diagram. Check out the full interactive version here.

Blog Archive » The Decline and Fall of The URL The URL is a very powerful concept; it represents a universal way to access any resource anywhere in the world. Here’s one of them, as it appears in Firefox 5′s address bar: The first few letters before the colon are called the protocol, which tells the computer how to interpret the rest of the URL. The http protocol is the most common and specifies a resource on the World Wide Web, while the tel protocol specifies a telephone number, and https specifies a resource on the Web transferred over a secure channel that can’t be eavesdropped. Those are just a few; there’s lots of other ones. Many user interface designers for browsers believe that most users don’t understand what a protocol is, which is probably accurate. There’s a number of things that trouble me about this approach. Aside from those concerns, however, there’s something else I’m worried about. Understanding technology is relative.

Putting people first Big Data powers the modern world. What do we gain from Big Data? What do we lose? Al Jazeera America examines the role of technology and the implications of sharing personal information in the network’s first graphic novella, Terms of Service: Understanding Our Role in the World of Big Data. The new comic novella, available on Al Jazeera America’s website at is a thought provoking, entertaining field guide to help smart people understand how their personal, and often very private, data is collected and used. Co-produced by well-known cartoonist Josh Neufeld and Al Jazeera America reporter Michael Keller, Terms of Service is an entertaining feature that follows characters “Josh and Michael” as they journey through the challenges of digital privacy and other issues consumers should be aware of in the “brave new world” of technology and Big Data. Josh Neufeld is a nonfiction cartoonist living in Brooklyn.

The future of digital advtg – Interaction design As a digital advertising professional, I’m often asked, what according to me is the most important aspect of any piece of advertising? My reply instantly is ‘design’. And by design, I don’t just mean the beautiful layouts we create for brands. Interaction design, simply put, is the art of facilitating or instigating interactions between people by creating intuitive and efficient smart products. But let’s not immerse ourselves in jargon and theory. Here are the five basic principles of great interaction design. 1. The key is to keep things really simple for the end user. Here’s what I’m talking about: 2. Interaction design makes technology, particularly digital technology, useful, usable, and pleasurable to use. So while it’s great to innovate, technology should always act as an enabler, not a barrier. This how you do it: 3. Interaction design works at its best when combined with the physical world. See for yourself: 4. 5. The author is Creative Director, Webchutney

UX Storytellers Leap Motion’s Michael Buckwald Lays Out His Vision For Gesture-Based Computer Interaction While I was at South by Southwest Interactive, I had a chance to meet with the Leap Motion team and try out their upcoming gesture-based controller. We’ve been writing about the company for a while now, but this was a chance to see the technology in-person, and to use it with existing apps. Thankfully, my own feeble attempts to play Cut The Rope using the Leap Motion Controller weren’t recorded on camera, but we did film a short demo by Vice President of Product Marketing Michael Zagorsek. He showed off a 3D visualizer that helps developers understand the controller’s capabilities, then played Fruit Ninja using a chopstick, and finally used the controller to sculpt a digital clay. After the demo, I sat down with CEO Michael Buckwald to talk some more about his plans for the product. I was impressed by what I saw, but I also asked Buckwald whether, in order to master the new controller, some users might have to un-learn certain behaviors acquired from keyboards, mice, and trackpads.