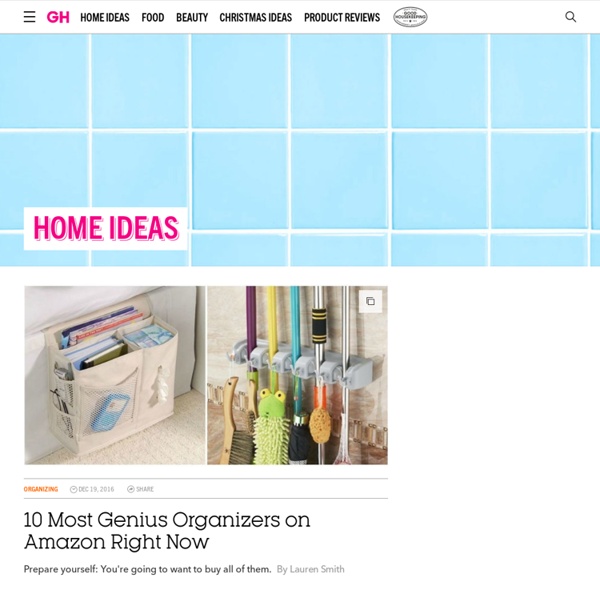 Green Spring Cleaning: 9 DIY Recipes for Natural Cleaners April 1, 2013 Conventional cleaning products may be loaded with unsafe chemicals (no telling which ones as their formulas are protected as trade secrets…), but fortunately they’re not the only spring cleaning option. Green cleaners made with common natural, non-toxic ingredients are safer and cheaper to use, and they clean just as well. MIT Creates New Energy Source This is some pretty exciting news. It seems that researchers at the Massachusetts Institute of Technology (MIT), one of the most prestigious science and engineering schools in the United States, has created a new energy source -- and it's clean and renewable. The odd thing is that the only way you can see this energy source is with a very powerful microscope, because it is created by using nanotechnology.

Hydroponic Bottle Garden Hydroponic Hanging Garden. Great method for growing veggies and herbs in a confined space, easy to look after, create a mini green house environment in any window. Supplies needed. ! in this case i used 8 oz -600ml water bottles (preferably all the same) The World's First Vertical Forest Is Growing Sky High Did you know that Milan is one of the most polluted cities in Italy? Apparently urban sprawl and increased emissions are major causes for slumping air quality in the international fashion capital. So Italian architect Stefano Boeri has formulated an unusual plan to give the city back what it’s lacking: namely, some greenery. Bosco Verticale is Italian for “Vertical Forest.” The project took inspiration from traditional Italian towers covered in ivy.

Travel It is tough to describe our six glorious days at Castello Di Reschio in Umbria, Italy, without resorting to clichés and big words that sound like overstatements. Awesome. Amazing. Surreal. Idyllic. DIY: How To Make Your Own Green Terrarium To Keep or Give Away for the Holidays! - A clear glass jar, vase, bowl, glass, or whatever interesting glass container you have on hand - Rocks, pebbles or recycled glass chunks - Activated charcoal (sometimes called activated carbon) - Potting soil appropriate for your plants - Moss (optional) - Figurines, sticks or decorative items (optional) - Various small plants - A scoop, spoon or shovel - Scissors - Gloves Source your containers from a thrift store or an antique store or scrounge around your house for an old jar. Even simple jelly jars or canning jars can make beautiful terrariums. They can be open or closed – it’s totally up to you. Everything else can be bought at your local gardening center. As for the plants, the sky is the limit, but generally speaking look for small plants that you can fit inside your jar.

Illinois Boy Wins $1,000, Donates Money to Neighbor Fighting Leukemia Forget toys and video games. When Wyatt Erber won $1,000, the Illinois third-grader knew exactly what he wanted to do with the money. The 8-year-old gave his winnings to the family of his young neighbor, 2-year-old Cara Kielty, who is battling leukemia. "He was really aware of what cancer is," said Wyatt's mom, Noelle Erber. "When he found out Cara had cancer, his heart sank." One week after the Cara Kielty was diagnosed, Noelle Erber asked her son if he'd like to enter a scavenger hunt sponsored by a local bank.

27 Non-Toxic Recipes for DIY Cleaning You Might Like DIY Deodorant: The 4-Ingredient Recipe to De-Stink Naturally READ Spring is finally near (please?), and that means it’s time for lounging in the grass, tossin’ the disc, barbecuing with friends, and scouring your living space from top to bottom. 17 wonderfully weird websites you should bookmark right now In 2012, it’s estimated the internet hosted an incredible 634 million websites. Even if you checked out a thousand a day, it would still take you over 1700 years to visit them all. But happily, you don’t need to live over 200 lifetimes to discover the Web’s most wonderfully weird websites.

Cool Thumb-controlled Watering Pot Made With Recycled Materials I got the idea to make these thumb controlled pots from the pottery ones I’ve seen at Historic Williamsburg. The original earthenware “thumb pots” were used in 17th and 18th century English gardens. I reproduced this clever watering device using salvaged plastic bottles and jugs. It is ideal for watering delicate seedlings. I use this watering pot all the time now. Eco Bath by Jang Woo-seok Use Your Water Twice It goes in the sink, then it goes in the toilet. What’s that? It’s your water bill! No joke: This is the biggest battery breakthrough ever A pioneer in battery research who already successfully launched a $350 million company to supply batteries to the likes of GE and Chrysler has done it again — only this time, "it" represents the complete reinvention of battery technology as we know it. This technology is in the research phase, but if it can be cost-effectively brought to market — and there's every reason to believe that it could be — it could revolutionize the way we store and transport energy, in the process fully replacing fossil fuels and especially oil. The key to this new technology is that the metals that would normally be solids in a conventional battery have been broken into nano-size particles that are suspended in a liquid. The batteries, known as "semi-solid flow cells," store their power in a black gunk that looks like motor oil, which has earned it the nickname "Cambridge Crude."

16 Foods That’ll Re-Grow from Kitchen Scraps By Andy Whiteley Co-Founder of Wake Up World Looking for a healthy way to get more from your garden? Like to know your food is free of the pesticides and other nasties that are often sprayed on commercial crops?