The Meatless Challenge: 7 Vegetarian Meals for $10 or Less 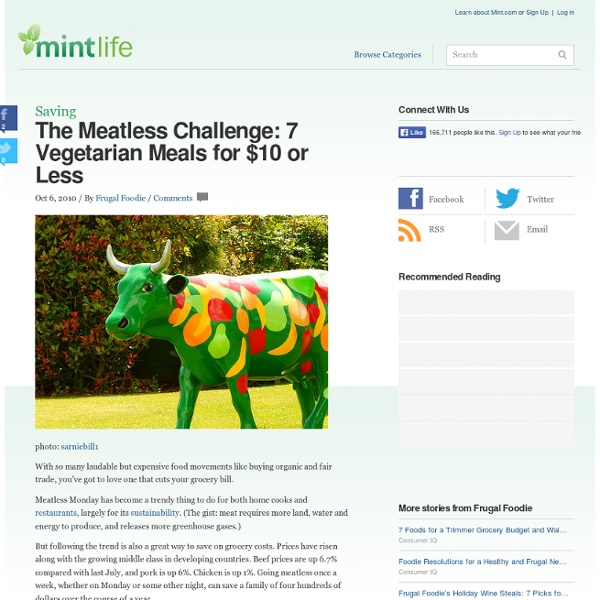 photo: sarniebill1 With so many laudable but expensive food movements like buying organic and fair trade, you’ve got to love one that cuts your grocery bill. Meatless Monday has become a trendy thing to do for both home cooks and restaurants, largely for its sustainability. (The gist: meat requires more land, water and energy to produce, and releases more greenhouse gases.) But following the trend is also a great way to save on grocery costs. Prices have risen along with the growing middle class in developing countries. As with our first “meals under $10″ challenge, we asked food and finance bloggers, as well as chefs and home cooks, to send in their best suggestions for a meal fit for a family of four. Now Frugal Foodie has a challenge for you: what’s your best super-cheap yet gourmet vegetarian meal? (All cost estimates are based on non-sale New York City supermarket prices. Spiced Veggie Burgers Cost: $2.35, or $0.59 per serving Eggplant Stew Cost: $3.92, or $0.98 per serving

The Astounding Design Of Eixample, Barcelona Constructed in the early 20th century, Eixample is a district of the Spanish city of Barcelona known for the urban planning that divided the district into octagonal blocks. Influenced by a range of schools of architecture, Eixample Barcelona was designed in a grid pattern with long streets, wide avenues, and rounded street corners. Despite being in the center of a thriving European metropolis, the district provides improved living conditions for inhabitants including extensive sun light, improved ventilation, and more open green space for public use. Apartment Therapy The Kitchn Previous image Next image Bean dips and spreads Last week, we explored Vegan Breakfast Ideas; now let's move onto lunch!

SPICED LENTIL SOUP WITH COCONUT MILK SPICED LENTIL SOUP WITH COCONUT MILK // Serves 6 Recipe adapted from The Travelers Lunchbox who adapted it from Once Upon a Tart The recipe calls for green lentils. I used a mixture because I have a large amount of them and they worked just fine. Split or red lentils will likely get too mushy here. Cheesy Broccoli Quinoa One of my favourite side dishes has to be cheesy broccoli rice which is a quick and easy dish where with the amazing broccoli and cheddar cheese flavour combo! Ever since I discovered quinoa I have been trying my favourite rice dishes with the rice replaced with the healthier quinoa and it was finally time to try a cheesy broccoli quinoa! This dish is super easy to make and you pretty much just cook the quinoa with the broccoli and then mix in the cheese once the quinoa and broccoli are cooked. Some of the things that I like about this recipe are that it is a one pot dish and that it is a stove top dish which is great for holiday dinners where there never seems to be enough oven space or time. I think I now have a new favourite side dish! Get 5 Closet Cooking cookbooks in a bundle for a 30% discount over buying them individually.

Finds: Awesome Cake Designs Posted by C on Wednesday, June 13, 2012 · [via thisisnthappiness.com] I’m not really that big fan of cakes. Ten scrumptious vegan recipe photos to titillate your taste buds There is no better time than a long weekend, especially the last unofficial weekend of summer, to try new foods. The following ten recipes offer a nice variety of meal ideas and desserts to get you started this Labor Day Weekend. Raw Strawberry Cheescake by JoLynn at Dreamin' It Vegan Ingredients include strawberries, dark chocolate, coconut, dates, and pecans. Recipe here Making Homemade Peanut Butter Homemade peanut butter. Photo by Donna Turner Ruhlman. That 30 cases of salmonella have been reported in 18 states is, of course, troubling (HuffPo story here). I buy bottled stuff—mustard, mayo, ketchup, hoisin, etc.—and feed it to my kids.

Doggie Style Genuine Chicago Vienna all-beef hot dog with the famous snap! Try one with everything! Another Chicago favorite, big bold, flavor, pile it on! Brown Butter Double Fudge Chocolate Chip Cookie Dough Cookies Little bit of a mouthful there. But it’s like a cookie on top of another cookie! Yeah. Like total dirty cookie on cookie action. Except these ones down below wanted to try a few different positions. Spicy Pumpkin Soup Recipe ~ Healthy Soup Recipe Spicy Southwest Pumpkin Soup Most pumpkin soup recipes are loaded with cream, but this Spicy Pumpkin Soup is a healthy soup recipe, bold and rich with southwest flavor. It’s gluten free, vegan, and a comfort to the soul. Life has many high points, but here and there we stumble into dark valleys, filled with trials and defeat. Black Pepper-Garlic Chicken Here's one on my favorite Stir-fry recipes, inspired by Black Pepper Chicken served at Panda Express Restaurants. The savory sauce took a bit of tinkering, but I think this copycat version is really close... and it's delicious, too! Please... don't forget to start this recipe with Velveted Chicken. It's a very simple technique that'll turn any Chicken Stir-fry into a mouth-watering Asian masterpiece!