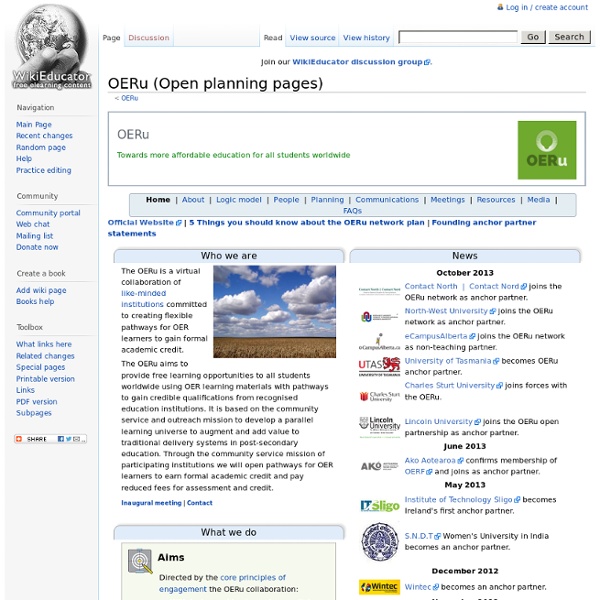 50 Excellent Open Courses on Teaching With Technology The information below is taken from a recent posting on www.onlinecollegesanduniversities.com. It is a listing of 50 free online courses that are offered on a wide variety of instructional technology topics. The courses are free, self-directed, and accessible over the internet. Mapping the landscape of Open Educational Resources institutional initiatives Over the past decade, there have been more and more initiatives in more and more countries. It has become difficult to have a sense of the OER landscape. As we seek to explain Open Educational Resources to stakeholders, as we seek to connect with others and as we seek to learn from the experience of others, we might find useful a picture of the OER world – a global map of institutional (and perhaps national) initiatives as a starting point. Over time, an “OER World Map” could be enhanced as the community wished and found feasible. Maps can be effective in immediately communicating a message. There are already several global maps that have been created for specific OER groups, such as, the Open CourseWare Consortium and the UK Open University OLnet project Evidence Hub.

10 Websites To Make You Think Supposedly browsing the internet requires more brain power than watching television. Although judging from some of the websites we’ve come across that assumption is cast into doubt. Here’s some of the sites we like that might get your brain to sit up and listen. Ted A conference that started in 1984 bringing together experts in technology, entertainment and design quickly grew into so much more.

OpenCourseWare History[edit] The OpenCourseWare movement started in 1999 when the University of Tübingen in Germany published videos of lectures online for its timms initiative (Tübinger Internet Multimedia Server).[1] The OCW movement only took off, however, with the launch of MIT OpenCourseWare at the Massachusetts Institute of Technology (MIT) and the Open Learning Initiative at Carnegie Mellon University[2] in October 2002. The movement was soon reinforced by the launch of similar projects at Yale, the University of Michigan, and the University of California Berkeley. MIT's reasoning behind OCW was to "enhance human learning worldwide by the availability of a web of knowledge".[3] MIT also stated that it would allow students (including, but not limited to its own) to become better prepared for classes so that they may be more engaged during a class. Since then, a number of universities have created OCW, some of which have been funded by the William and Flora Hewlett Foundation.[3] Principles[edit]

The Human Brain · Atlas of the Human Brain · Brain in Stereotaxic Space Brain – The Atlas of the Human Brain in Stereotaxic Space A short introduction in to the Atlas of the Human Brain and the Brain used throughout for the research on this site. To take a more systematical approach to the use of the provided material both on the DVD from the "Atlas of the Human Brain" and the applications you can find on this website the following explanatory steps might help. Spotlight on E-Learning Education Week's Spotlight on E-Learning brings together a collection of articles hand-picked by our editors for their insights on: Understanding different models of online learningChoosing the right e-learning companyIncreasing access and equity in digital learningHow elementary schools incorporate e-learningParental involvement in online educationWhat works best for classrooms that blend face-to-face and virtual learningNew standards outlining online-course design Elementary school online students need remediation or acceleration at junctures in their development some say are more crucial than any in high school.

4 Challenges for OER in Higher Education Open Resources | Feature 4 Challenges for OER in Higher Education Key challenges are emerging with the growing use of open educational resources in higher education. To find out just what those challenges are and how colleges and universities are overcoming them, Campus Technology spoke with two experts on the subject. By Bridget McCrea06/26/12 Accustomed to using textbooks, pre-developed assessments, and other standard materials in their classrooms, today's college professors are using more open educational resources (OER) than ever.

How to Master a New Skill We all want to be better at something. After all, self-improvement is necessary to getting ahead at work. But once you know what you want to be better at — be it public speaking, using social media, or analyzing data — how do you start? Breath Sounds Lung sounds Breath Sounds Auscultation of lungs help determine the airway and alveolar integrity, ventilation and presence of abnormality. There are two normal breath sounds. Bronchial and vesicular . Breath sounds heard over the tracheobronchial tree are called bronchial breathing and breath sounds heard over the lung tissue are called vesicular breathing.