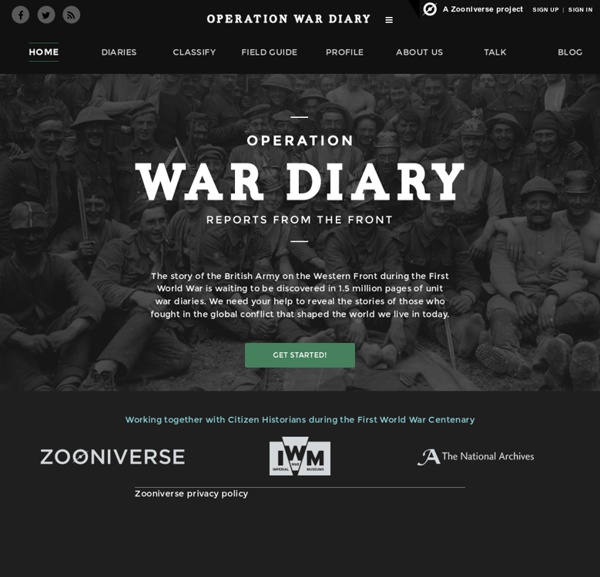 Our Heritage The Our Heritage programme is for any type of project related to national, regional or local heritage in the UK. You can apply for a grant of more than £10,000 and up to £100,000. Under this programme, we fund applications from not-for-profit organisations, private owners of heritage (including individuals and for-profit organisations) and partnerships. You can read more about Our Heritage in the application guidance. Please note that we have updated our application guidance. Our Heritage is a rolling programme, meaning you can apply anytime. We recommend that you send us a project enquiry form before you apply.

Europeana Collections 1914-1918 - Is it 1914 all over again? We are in danger of repeating the mistakes that started WWI, says a leading historian - World Politics - World The newly mechanised armies of the early 20th century produced unprecedented slaughter on the battlefields of the "war to end all wars" after a spark lit in the Balkans with the assassination of the Austro-Hungarian Empire's Archduke Franz Ferdinand. Professor Margaret MacMillan, of the University of Cambridge, argues that the Middle East could be viewed as the modern-day equivalent of this turbulent region. A nuclear arms race that would be likely to start if Iran developed a bomb "would make for a very dangerous world indeed, which could lead to a recreation of the kind of tinderbox that exploded in the Balkans 100 years ago – only this time with mushroom clouds," she writes in an essay for the Brookings Institution, a leading US think-tank. "While history does not repeat itself precisely, the Middle East today bears a worrying resemblance to the Balkans then," she says. Professor MacMillan highlights a string of other parallels between today and a century ago.

The Auchinleck Manuscript | Manuscripts Online The Auchinleck Manuscript provides a unique insight into the English language and literature that Chaucer and his generation grew up with and were influenced by Contents Main URL auchinleck.nls.uk Description The Auchinleck Manuscript is one of the National Library of Scotland's greatest treasures. The manuscript volume has held a prominent place in discussions of the history and development of Middle English. Scope This resource is particularly useful to scholars of language, literature and the history of book production. The electronic edition includes a full transcription of the manuscript's 44 texts, accompanied by high-quality colour digital images of the manuscript pages. Introductory reading Wiggins, A. Wiggins, A. Technical Methods The text was manually transcribed to produce accurate and consistently transcribed and edited texts. Editorial and transcription policy Special Characters The resource includes the searchable special characters thorn (þ, Þ), eth (ð, Đ) and yogh (ȝ, Ȝ). Contact

Untold Stories of the First World War Photos, letters and other memorabilia It was the war that tore Europe apart – a struggle between the central powers of Germany, Austria-Hungary, Turkey and Bulgaria, against the allied powers of Britain, France, Belgium, Russia, Italy and the USA. No European nation was left untouched – even neutral states felt the impact of the war. Renowned historian and WW1 author Peter Englund said: “This important and imaginative project tells the other side of the story, from the point of view of a young soldier who signed up seeking adventure, to the family devastated by news that he was one of millions who would never return.

First world war: memories of the last survivors | World news 'God let me live so that I could tell the story'Ovsanna Kaloustian Turkey The diminutive old woman does not go out in Marseille much any more. She hunches over a cane and is spoilt, mollycoddled by her daughter and grandchildren. Ask her about her childhood, and she becomes perfectly alert. Ovsanna Kaloustian is 106 years old, and one of the last survivors of the Armenian genocide of 1915. As a memory bearer, she is perfectly aware of the role she has to play almost a century later. Ovsanna has kept a whole host of images and details that she describes energetically, of the terror, the massacres and the deportation of her people from the Ottoman empire. Ovsanna was eight years old in 1915, when the Young Turks government ordered the deportation of Armenians. It was not until two years later that they were finally dispersed, and ran to hide in the countryside. Ovsanna earned a bit of money by working in textiles and married the sole survivor of a massacred family, Zave Kaloustian.

Halloween | History of Halloween | Trick or Treating | Making Jack-o'-lanterns Halloween is a festival that takes place every year on October 31. It is a time when children and adults dress up in costumes, go trick or treating and make jack-o-lanterns from empty pumpkins . Halloween goes back to the customs and traditions of the Celts , who lived between Ireland and Northern France about 2000 years ago. They were pagans who did not believe in god. In ancient Rome the festival of Pomona was held in honour of the Roman goddess of fruits and gardens. Today Halloween is celebrated mainly by children who dress up as ghosts, witches and other evil spirits . In 1950 a school class in a small American neighborhood started collecting money instead of asking for treats. In many European countries people visit the graves of their relatives on All Saints’ or All Souls’ Day . The jack-o’-lantern is closely connected with Halloween. According to an old Irish story jack -o’-lanterns were named after a man called Jack. Online Exercises Words A.D