Do men and women speak the same language? 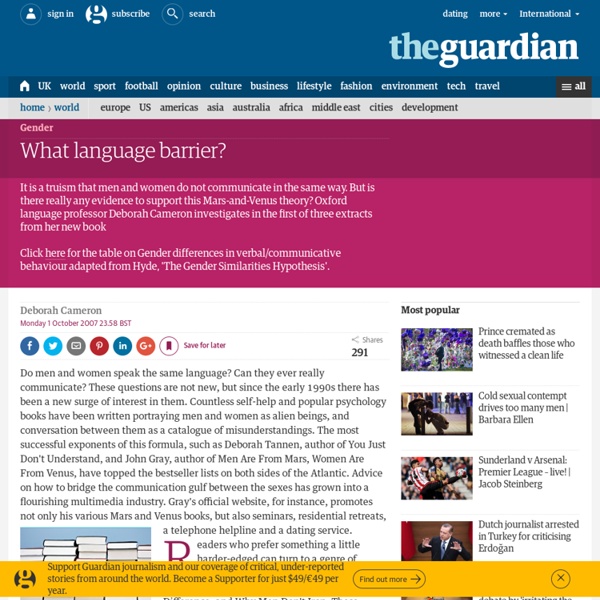 Do men and women speak the same language? Can they ever really communicate? These questions are not new, but since the early 1990s there has been a new surge of interest in them. Countless self-help and popular psychology books have been written portraying men and women as alien beings, and conversation between them as a catalogue of misunderstandings. The most successful exponents of this formula, such as Deborah Tannen, author of You Just Don't Understand, and John Gray, author of Men Are From Mars, Women Are From Venus, have topped the bestseller lists on both sides of the Atlantic. Advice on how to bridge the communication gulf between the sexes has grown into a flourishing multimedia industry. Readers who prefer something a little harder-edged can turn to a genre of popular science books with titles such as Brain Sex, Sex on the Brain, The Essential Difference, and Why Men Don't Iron. The growth of call centres is part of a larger trend in economically advanced societies.

Gender Communication Differences and Styles Little did we know that the communication differences we experienced as children on the playground would move from the classroom to the boardroom. As the face of business transforms with more women occupying key management positions, the requirement of reducing the gender communication gap is growing: miscommunication can cost money, opportunities, and jobs. Statistics tell the story. THE CASE OF THE MISSING MALE READER: IMPLICATIONS OF GENDERLECT AND THE REA...: Resource Finder Despite the increasing relationship between literacy and economic opportunities, the time young adult males spend reading has fallen during the last 20 years, with a corresponding decline in their reading levels. One important factor influencing the appeal of reading material to males is whether it is "real"--whether males see themselves and their concerns in the text. Language, an important constituent of gender, must be part of making text "real" for adolescent males. The author examined nearly 200 fiction works written for young adult males and concluded that few are written in a male "genderlect," the language that males use. The article identifies several works that do use such language.

Bullish Life: When Men Get Too Emotional To Have A Rational Argument Jennifer Dziura writes life coaching advice weekly here on TheGloss, and career coaching advice Fridays on TheGrindstone. On the night of the election, I was alone in my apartment, refreshing CNN.com. The electoral tally went above 270. Facebook's Sheryl Sandberg attacks gender stereotypes at work Sheryl Sandberg, the chief operating officer of Facebook, has launched a fierce attack on the gender stereotypes that hold back women at work at the World Economic Forum in Davos. Sandberg, who is publishing a book called Lean In on women in the workplace in March, singled out T-shirts sold in the US, with the boys' version emblazoned with the words "Smart Like Daddy", while the girls' version says "Pretty like Mommy". "I would love to say that was 1951, but it was last year," she said. "As a woman becomes more successful, she is less liked, and as a man becomes more successful, he is more liked, and that starts with those T-shirts." She blasted managers who unconsciously reflect stereotypes when they judge women's performance, saying: "She's great at her job but she's just not as well liked by her peers," or: "She's a bit aggressive." "They say this with no understanding that this is the penalty women face because of gender stereotypes," she said.

Women told to speak their minds to get on in boardrooms Women – including those who work in senior positions for some of the country's leading firms – are held back from reaching the very highest levels in business because of the difficulties they find in striking the right tone of language during high pressure meetings. The claim is made by linguistics expert Dr Judith Baxter, who undertook an 18-month study into the speaking patterns of men and women at meetings in seven major well-known companies, including two in the FTSE-100. The research found that women were four times more likely than men to be self-deprecating, use humour and speak indirectly or apologetically when broaching difficult subjects with board members in order to avoid conflict. And it doesn't always work.

Language and Woman's Place: Text and Commentaries - Robin Tolmach Lakoff, Mary Bucholtz The 1975 publication of Robin Tolmach Lakoff's Language and Woman's Place, is widely recognized as having inaugurated feminist research on the relationship between language and gender, touching off a remarkable response among language scholars, feminists, and general readers. For the past thirty years, scholars of language and gender have been debating and developing Lakoff's initial observations. Arguing that language is fundamental to gender inequality, Lakoff pointed to two areas in which inequalities can be found: Language used about women, such as the asymmetries between seemingly parallel terms like master and mistress, and language used by women, which places women in a double bind between being appropriately feminine and being fully human. Lakoff's central argument that "women's language" expresses powerlessness triggered a controversy that continues to this day.

Casual sexism from politicians is no joke MSP Murdo Fraser: his language is 'straight out of the 1950s', said one Twitter user. Photograph: Danny Lawson/PA Archive/Press Association Ima An Indonesian high-court judge sparked international outrage when, during a recent interview for a position on the supreme court, he suggested that women might "enjoy" being raped. His comments may cost him his appointment, but they also serve to highlight the prevalence of sexist and misogynistic comments from authority figures far closer to home. Murdo Fraser, Member of the Scottish Parliament for Mid-Scotland and Fife, discovered last week that the wife of former Liberal leader Lord Steel had declared herself pro-independence.

Language and gender Introduction This guide is written for students who are following GCE Advanced level (AS and A2) syllabuses in English Language. This resource may also be of general interest to language students on university degree courses, trainee teachers and anyone with a general interest in language science. Level Up: English Language - Language and gender Language and Gender There are two different types of Language and Gender questions you could be asked about: representations of gender and gender in action. For instance, magazine articles, adverts and books all include representations of gender (usually stereotypes) and not what males and females are really like. It's the perception of a gender difference, not a real gender difference.

Does Facebook have a problem with women? Does Facebook have a problem with women? The question has been around since 2011 when Eve Ensler and Ms Magazine drew attention to the social networking site's failure to remove misogynistic images that seemed to glorify rape and domestic violence. Then the issue came back again with users taking to Twitter in recent weeks to express their anger at Facebook's refusal to remove images that tried to make a joke of rape. Two in particular were widely circulated. One showed a woman bound and gagged on a sofa and a caption that read: "It's not rape. Linguistics Research Digest: Language and gender Do you think you would be able to guess the gender of the author of an anonymous tweet? David Bamman, Jacob Eisenstein and Tyler Schnoebelen found some distinct but complex differences in the way men and women use language on the Twitter microblogging site. The researchers amassed a corpus of over 9 million tweets from more than 14,000 American users. They then assigned gender to each account using historical census information on given names. Using computational methods and statistical tests, they found that: · pronouns are used more frequently by women.

From Lakoff to Today – The Gender Factor in Spoken Interaction Robin Lakoff’s Predictions: Robin Lakoff, in 1975, published an influential account of women’s language. This was the book Language and Woman’s Place. In a related article, Woman’s Language, she published a set of basic assumptions about what marks out the language of women.