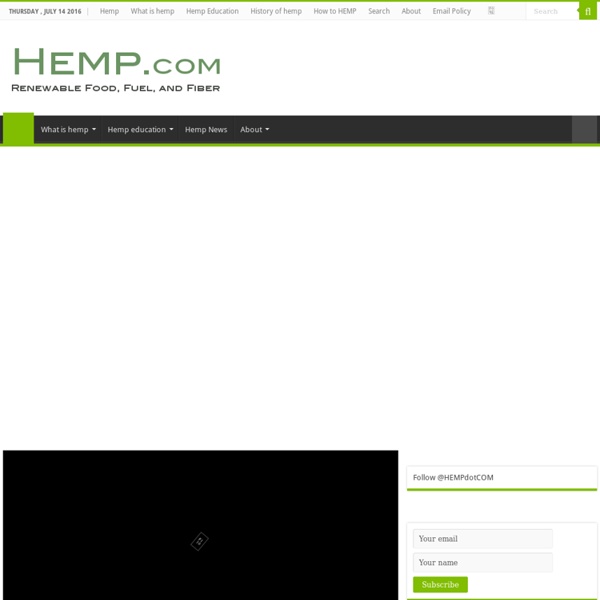 Guadua Bamboo: Discover The World's Strongest Bamboo Hempearth News and Blog Are you aware that hemp history is really not a mystery? Hemp has truly revolutionized the universe in so many different ways. It will continue to help humanity and shape the world to become more beautiful than it already is. Hemp history has dated back to 8000 B.C. in Mesopotamia. Hempearth Following this further, hemp history even dates back to 1000 B.C. where it was known as the “univerisal crop” around the globe. Hemp is growing at a 20% yearly growth rate. Vitamin Hemp Moreover, today hemp is even being used to as replacement for fiber glass in many motor vehicle components. Hemp In China Currently, many renown countries are using hemp worldwide. As we progress into the future we will see how hemp creates life and how life creates hemp.

Welcome to Hemp Plastic Hemp.TV This item has been hidden Sensi's Videos Play all Videos in which cannabis strains of the the Sensi Seed Bank are shown. You will also find videos which are shot in one of the Sensi coffee shops. 7:50 4:15 2:56 9:17 9:04 5:09 0:51 0:50 1:46 0:52 1:39 View 3 more This item has been hidden This item has been hidden raising awareness of the consequences of prohibition Special to Drug War Chronicle by Houston-based investigative journalist Clarence Walker, cwalkerinvestigate@gmail.com. Part 9 of his continuing series on Prosecutorial Misconduct and Police Corruption in Drug Cases Across America. Camden, New Jersey. Tough times in a tough town. (wikimedia.org/adam jones) A Day in the Life in Camden August 2, 2008 was a typical summer day in Camden, New Jersey, a gritty, impoverished, mostly black community across the Delaware River from Philadelphia. But as he arrived at his friend's house, Barnes encountered heavily-armed Camden police officers rushing into the house with guns drawn shouting "Police! It didn't work out that way. [Editor's Note: All quotes from Camden residents come from The Philadelphia Inquirer unless otherwise specified.] Another Camden cop, Officer Antonio Figueroa, led Barnes out of the house and threw him into a van, then left. "I don't know if there's drugs in that house. But Barnes was innocent. Taking Down the Platoon Squad

Materials Research Society: Advancing Materials. Improving the Quality of Life Florida Hemp Industries Association How industrial hemp is made - production process, making, history, used, processing, parts, components, steps, product, industry, machine, History, Raw Materials Background Hemp is a distinct variety of the plant species Cannabis sativa L. that grows to a height anywhere from 4-15 ft (1.2-4.5 m) and up to 0.75 in (2 cm) in diameter. The plant consists of an inner layer called the pith surrounded by woody core fiber, which is often referred as hurds. Bast fibers form the outer layer. The primary bast fiber is attached to the core fiber by pectin—a glue-like substance. Due to the similar leaf shape, hemp is frequently confused with marijuana, another cannabis plant. Canada is one country that has legalized hemp, though with certain restrictions. Farmers who grow hemp claim it is a great rotation crop and can be substituted for almost any harvest. Advocates of hemp claim that it can be used in 25,000 different products, from clothing to food to toiletries. Other products made from hemp fiber include: insulation, particleboard, fiberboard, rope, twine, yarn, newsprint, cardboard, paper, horse stable bedding, and compost. History Raw Materials Books

The Real Reason Hemp Is Illegal The real reason Cannabis has been outlawed has nothing to do with its effects on the mind and body. MARIJUANA is NOT DANGEROUS. Pot is NOT harmful to the human body or mind. The truth is if marijuana was utilized for its vast array of commercial products, it would create an industrial atomic bomb! Where did the word ‘marijuana’ come from? * All schoolbooks were made from hemp or flax paper until the 1880s; Hemp Paper Reconsidered, Jack Frazier, 1974. * It was LEGAL TO PAY TAXES WITH HEMP in America from 1631 until the early 1800s; LA Times, Aug. 12, 1981. * REFUSING TO GROW HEMP in America during the 17th and 18th Centuries WAS AGAINST THE LAW! * George Washington, Thomas Jefferson and other founding fathers GREW HEMP; Washington and Jefferson Diaries. * Benjamin Franklin owned one of the first paper mills in America and it processed hemp. * For thousands of years, 90f all ships’ sails and rope were made from hemp. * In 1916, the U.S. * Hemp called ‘Billion Dollar Crop.’ Dr. Eddie

Welcome Since it first went online in 1998, Drug War Facts provides reliable information with applicable citations on important public health and criminal justice issues. It is updated continuously by its current Editor, Doug McVay. Most charts, facts and figures are from government sources, government-sponsored sources, peer reviewed journals and occasionally newspapers. In all cases the source is cited so that journalists, scholars and students can verify, check context and obtain additional information. Our mission is to offer useful facts, cited from authoritative sources, to a debate that is often characterized by myths, error, emotion and dissembling. Drug War Facts is sponsored by Common Sense for Drug Policy. To the extent of its copyrights, Common Sense for Drug Policy authorizes and encourages the use and republication of some or all portions of this book. Click here for a list of chapters. A PDF copy of Drug War Facts, 6th Edition is also available.

'Bamboo' Fabrics Looking to be a more environmentally conscious shopper? You’ve probably heard about bamboo. Bamboo stands out for its ability to grow quickly with little or no need for pesticides, and it is used in a variety of products, from flooring to furniture. But when it comes to soft bamboo textiles, like shirts or sheets, there’s a catch: they’re actually rayon. The Federal Trade Commission, the nation’s consumer protection agency, wants you to know that the soft “bamboo” fabrics on the market today are rayon. They are made using toxic chemicals in a process that releases pollutants into the air. There’s also no evidence that rayon made from bamboo retains the antimicrobial properties of the bamboo plant, as some sellers and manufacturers claim. Companies that claim a product is “bamboo” should have reliable evidence, like scientific tests and analyses, to show that it’s made of actual bamboo fiber. This article was previously available as Have You Been Bamboozled by Bamboo Fabrics?