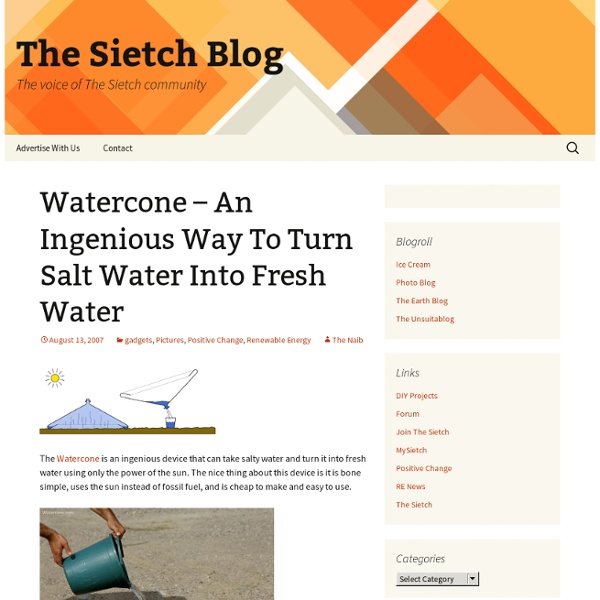 The Watercone is an ingenious device that can take salty water and turn it into fresh water using only the power of the sun. The nice thing about this device is it is bone simple, uses the sun instead of fossil fuel, and is cheap to make and easy to use. The Watercone is surprisingly a cone, that you place over a pan of salty water (or over a marsh, or any damp ground) leave it out in the sun, water evaporates, the condensation trickles down the side of the cone, at the end of the day you flip it over, remove the cap at the top and drink the water. This device has the potential to really do a lot of good for a lot of people. They claim that on average one Watercone can produce one liter of water per-day. The Watercone website has some really interesting information and I highly recommend checking it out. 1.

UC Berkeley Computer Science 61B - Fall 2006 Play all CS 61B: Data Structures - Fall 2006. Fundamental dynamic data structures, including linear lists, queues, trees, and other linked structures; arrays strings, and hash tables. Storage management. Top 10 Tips and Tricks to Train, Exercise, and Better Your Brain Take 4 omega 3-6-9 omega 4 fatty acid pills. Then the following days take one pill every hour and half until you have reached ten pills. Then take 3 pills every day. If you drink coffee or alchahol you have to start over. Within a month when the fatty acids have reached potency in your blood you will feel really sane, all the time. No date on Valentine's Day? Sit in the sun for an hour and a half a day. Meditate on compassion (hugging a starving african child, in you MIND) Have a source for good safe sex that doesn't cause you stress (a challenge) Avoid sex or swapping fluids with anyone until you know their over all health to detect STDs. Do not eat food that has been left out. Do not eat food some one else has prepared. Do not eat boxed products that contain gluten. Minimize consumption of wheat, corn, soy, dairy, or non-organic flesh. Learn to grow your own Chia food. Eat lots of spouts. Eat Broccoli and Plantains. Do everything in this article. Do Yoga.

Gadgets n U !! Map my India launches portable charger for gadgets by vinayak mathur Map my India is better known for their GPS devices but this time they have launched a portable and high capacity mobile charger which you can carry. It can charge mobile phones, gaming consoles, GPS system, tablets, laptops or anything else. The charger has a massive 2200 mAh capacity. The charger can be recharged in only three to four hours of time. College Poison eMagazine - Part 12 Welcome to Hotel-anus. Yes, anus. In fact, the hotel is so named because it resembles the human colon. Although the anatomical point of view, the building is properly done, the last part (in fact, the anus), especially the “inflated”, located on the bed and the bathroom. Created this marvel of Dutch painter Van Dzhoep Lishut in 2007, and the hotel is situated on the route between Antwerp and Ghent in Flanders, Belgium.

30 Clever and Cool T-Shirt Designs You Will Love 2116 shares Adobe Illustrator CS6 Shortcuts Cheat Sheet Illustrator is a very important tool for designers and creative professionals. And no matter how familiar you are with it, there are always some shortcuts you could learn to be more productive. This is why you will love today’s exclusive Adobe Illustrator CS6 cheat sheet that the good people at ZeroLag have put together for WDL…. Read More 593 shares 30+ Fresh Icon Illustrator Tutorials As Graphic Designers, it’s important for us to learn how to create high quality icons.

Comics :: Popular The terrible and wonderful reasons why I run long distances. A comic about a glorious undersea creature. 20 years ago today my house burned down, so I wrote a comic about it My dog: the paradox How to suck at your religion An ode to the father of the electric age. I created a better curriculum for high school seniors. A tribute to rooster sauce. This illustrated diagram will tell you how shit goes wrong during the zombie apocalypse. All artwork and content on this site is Copyright © 2016 Matthew Inman.

Tesla - Master of Lightning: A Weapon to End War Tesla inherited from his father a deep hatred of war. Throughout his life, he sought a technological way to end warfare. He thought that war could be converted into, "a mere spectacle of machines." In 1931 Tesla announced to reporters at a press conference that he was on the verge of discovering an entirely new source of energy. War clouds were again darkening Europe. The idea generated considerable interest and controversy. By 1937 it was clear that war would soon break out in Europe. What set Tesla's proposal apart from the usual run of fantasy "death rays" was a unique vacuum chamber with one end open to the atmosphere. Of all the countries to receive Tesla's proposal, the greatest interest came from the Soviet Union. Tesla hoped that his invention would be used for purely defensive purposes, and thus would become an anti-war machine. Tesla also contemplated peacetime applications for his particle beam, one being to transmit power without wires over long distances.