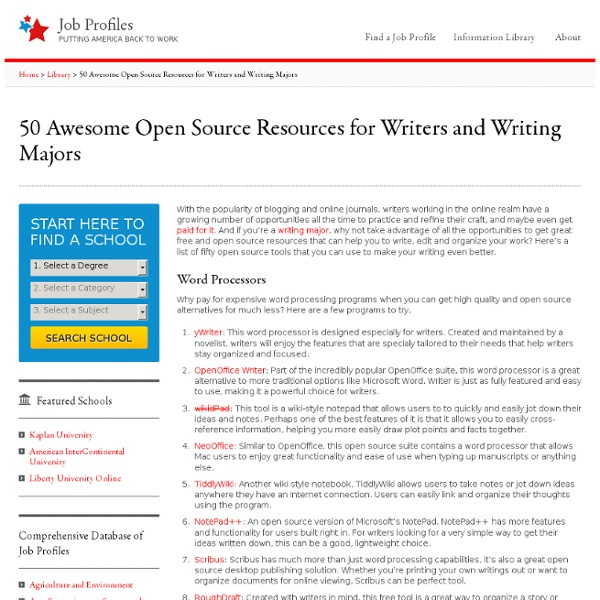 With the popularity of blogging and online journals, writers working in the online realm have a growing number of opportunities all the time to practice and refine their craft, and maybe even get paid for it. And if you’re a writing major, why not take advantage of all the opportunities to get great free and open source resources that can help you to write, edit and organize your work? Here’s a list of fifty open source tools that you can use to make your writing even better. Word Processors Why pay for expensive word processing programs when you can get high quality and open source alternatives for much less? Here are a few programs to try. yWriter: This word processor is designed especially for writers. Reference Everyone needs a little help with spelling and grammar now and again, and these programs can get you on the right track. Organization Working online isn’t always conducive to organization. Sonar: Getting published can be an uphill battle, but Sonar can make it a little easier.

150 Resources to Help You Write Better, Faster, and More Persuasively It doesn't matter if you're a student or a professional writer: there's always something new to learn and ways to make your writing more refined, better researched, and more effective. Writing is essential for students who want to succeed, whether they're enrolled in one of the top online colleges or an Ivy League university. As essential as it is, learning to write well isn't easy. The best practices for writing and research can sometimes be subjective, and the finer points of syntax and style often take a backseat to looming deadlines and strict citation guidelines. Luckily, there are many helpful resources that make it easier to build on your existing skills while learning new ones. We've compiled links to sites dedicated to helping students, bloggers, and professional writers improve their techniques while also becoming better editors and researchers.

5 Ways Not to Write a Novel Writing a novel? There's first-draft flow, and there's editing flow. And then there comes a time when you think you might be done, yet the manuscript is still not quite "there." The Thirty-Six Dramatic Situations The Thirty-Six Dramatic Situations is a descriptive list which was created by Georges Polti to categorize every dramatic situation that might occur in a story or performance. To do this Polti analyzed classical Greek texts, plus classical and contemporaneous French works. He also analyzed a handful of non-French authors. Cliche Finder Have you been searching for just the right cliché to use? Are you searching for a cliché using the word "cat" or "day" but haven't been able to come up with one? Just enter any words in the form below, and this search engine will return any clichés which use that phrase... Over 3,300 clichés indexed! What exactly is a cliche?

A Simple Novel Outline – 9 questions for 25 chapters « H.E. Roulo Just as every tree is different but still recognizably a tree, every story is different but contains elements that make it a story. By defining those before you begin you clarify the scope of your work, identify your themes, and create the story you meant to write. At Norwescon 2011 I sat in on a session called Outline Your Novel in 90-minutes led by Mark Teppo. I’ll give you the brief, readable, synthesized version. Answer 9 questions and create 25 chapter titles and you’re there.

Tension Hook Your Readers With Tension By Laura Backes, Write4Kids.com Tension. Without it, life would be—let's face it—boring. CALLIHOO Writing Idea Generators: The 37 Dramatic Situations The Thirty-six (plus one) Dramatic Situations Georges Polti says that all stories boil down to just 36 dramatic situations and takeoffs of those situations. Somebody else out there added #37. If you're stuck for a situation, try this. A situation appears below randomly (in bold print). If you'd like more information, or want to see the subplots for the situation, click on its link below. List of British words not widely used in the United States Wikipedia glossary This is a list of British words not widely used in the United States. In Canada, New Zealand, India, South Africa, and Australia, some of the British terms listed are used, although another usage is often preferred. Words with specific British English meanings that have different meanings in American and/or additional meanings common to both languages (e.g. pants, cot) are to be found at List of words having different meanings in American and British English. When such words are herein used or referenced, they are marked with the flag [DM] (different meaning).Asterisks (*) denote words and meanings having appreciable (that is, not occasional) currency in American English, but are nonetheless notable for their relatively greater frequency in British speech and writing.British English spelling is consistently used throughout the article, except when explicitly referencing American terms. 0–9[edit]

Here to Create & 102 Resources for Fiction Writing UPDATE 1/10: Dead links removed, new links added, as well as Revision and Tools and Software sections. Are you still stuck for ideas for National Novel Writing Month? Or are you working on a novel at a more leisurely pace? List of American words not widely used in the United Kingdom This is a list of American words not widely used in the United Kingdom. In Canada and Australia, some of the American terms listed are widespread; however, in some cases, another usage is preferred. Words with specific American meanings that have different meanings in British English and/or additional meanings common to both dialects (e.g., pants, crib) are to be found at List of words having different meanings in British and American English. When such words are herein used or referenced, they are marked with the flag [DM] (different meaning).Asterisks (*) denote words and meanings having appreciable (that is, not occasional) currency in British English, but nonetheless distinctive of American English for their relatively greater frequency in American speech and writing. 0–9[edit]

20 Must-Read Blogs For Freelance Writers The idea of this post comes from Steven’s recent post on freelance blogging. Freelance writing certainly has many advantages and can be rewarding too. It goes without saying that in order to become a freelance writer, you gotta love writing. But you should also consistently work on sharpening your skills. And how do you do that? Reading well-written articles and blogs is a very good start! 100 Sites for Fiction Writers: #17 – Tor.com This is an ongoing series looking at websites that can be of help to fiction writers with their craft and career. Tor.com Longtime fans of science fiction and fantasy reading will be familiar with Tor Books, the publishing company which has its online home at Tor.com.

Five Open Source Apps For Writers and Authors by Lisa Hoover - Jul. 17, 2009Comments (9) Even if you have the perfect idea for the next Great American Novel, getting it down on paper is never easy. While you could always use standard word processors like OpenOffice Write or AbiWord, they don't have the bells and whistles that make writing books, manuals, and theses as easy as possible. Fortunately, there are a few open source applications that help budding authors get stories out of their heads and into the hands of readers.