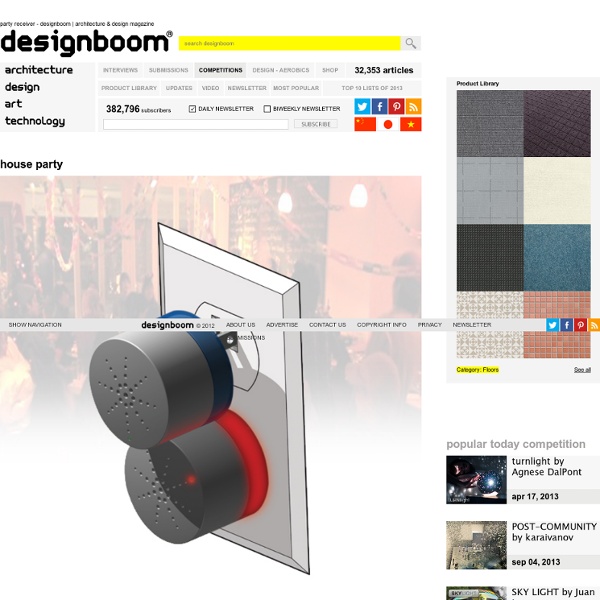 oct 26, 2006 party receiver by jinseup ted shin from usa designer's own words: This is a small electronic device that receives an FM signal from your music player, i.e. ipod, cell phone, cd player or any device equipped with an FM transmitter. At a party it is always hard to control the music you play, the sound of volume is not playing evenly throughout the place and you always have to have a big and bulky stereo system. Just plug this simple device into your power outlets; it will receive songs from your music player, even from your tiny ipod shuffle throughout entire place. It has a simple mechanism, speaker, led, and FM receiver. At first you plug in to a power outlet, the front indicator light will flash. If you like to pump up the volume you plug more in. title usage detail jinseup ted shin

Viral Video Chart New Heineken ad, 'The Date'. Watch a legendary date in action. #thedate Heineken has just shared the second film in their Legends campaign following on the heels of the brand’s popular ‘Entrance’ campaign which you’ll remember seeing end of last>/a> year. In this latest effort, Heineken has upped the ante with a story of a date, recast as a hip fairy-tale, that every guy would like to create for that special someone. ‘The Date’ follows the Heineken legend as he woos his girl on an epic date.

7th Grader mimics Nature 13 year old copies Nature to Improve Solar Performance Thirteen year old Aidan Dwyer was walking in the woods in Upstate New York in the winter and noticed a spiral pattern to tree branches. Aidan realized the tree branches and leaves had a mathematical spiral pattern that could be shown as a fraction. After some research he also realized the mathematical fractions were the same numbers as the Fibonacci sequence. "On the oak tree, the Fibonacci fraction is 2/5, which means that the spiral takes five branches to spiral two times around the trunk to complete one pattern. Other trees with the Fibonacci leaf arrangement are the elm tree (1/2); the beech (1/3); the willow (3/8) and the almond tree (5/13)

What is causing the waves in California to glow? It looks like something from the movie "Avatar": ocean waters that light up like neon glow sticks when they splash. Beaches across southern California have recently been alight with eerie, glowing waves. What could be causing such an otherworldly phenomenon? A recent report by Discovery News has provided an answer. According to marine biologist Jorge Ribas, the glowing is caused by a massive red tide, or algae bloom, of bioluminescent phytoplankton called Lingulodinium polyedrum. The microorganisms emit light in response to stress, such as when a wave crashes into the shore, a surfboard slashes through the surf, or a kayaker's paddle splashes the water.

Petra: Lost City of Stone Deep within the deserts of Jordan lies the ancient city of Petra. Through a narrow gorge it emerges into view, revealing awe-inspiring monuments cut into the surrounding cliffs. What is this astonishing city? Stumble! Via: amy-newnostalgia.blogspot.com Why didn’t I think of that?! We guarantee you’ll be uttering those words more than once at these ingenious little tips, tricks and ideas that solve everyday problems … some you never knew you had! (Above: hull strawberries easily using a straw). Via: apartmenttherapy.com Rubbing a walnut over scratches in your furniture will disguise dings and scrapes.

Soap Flakes : Nathalie Stämpfli Soap Flakes Soap Blocks instead of liquid Soaps Today, most of the soap we use is liquid soap, which contains a lot of water. Block soap instead is more concentrated and therefore has some ecological benefits: You don’t transport unnecessary water around. Tongue piercing steers wheelchair This device is a wheelchair steering "wheel" in the form of a dental retainer instrumented with sensors that are activated by a tongue piercing. Georgia Institute of Technology engineers devised the Tongue Drive System prototype for people with high-level spinal cord injuries. From Wired UK:

Къщата на хобитите в Уелс - StumbleUpon URGENT: Computer Backup Required Matt Folson - Microsoft Specialist Your computer has become slow, unresponsive, displaying errors, or has started experiencing other issues. 25 Cool Ideas To Display Family Photos On Your Walls Family portrait by Lori Andrews (via designcrushblog) We all have family photos that we love. Most of them live well in photo albums but the best of them could and should be displayed throughout the house. It’s one of those things that add a personal touch of coziness to any interior decor.