How to Build a Collective Intelligence Platform to Crowdsource Almost Anything 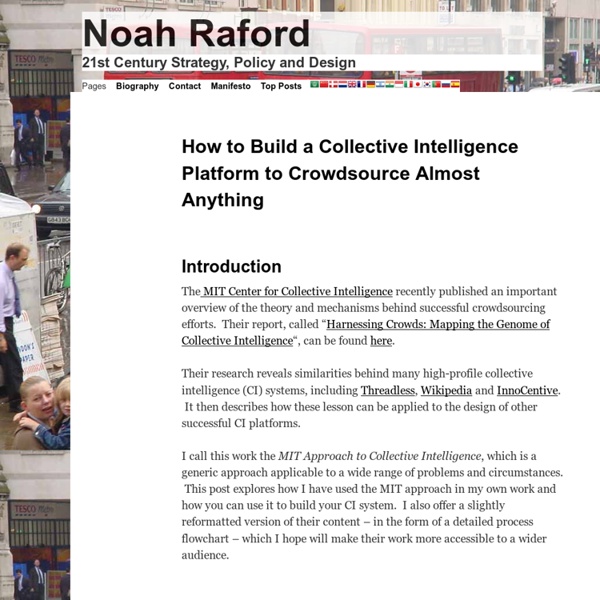 Ushahidi :: Crowdsourcing Crisis Information (FOSS) 10 Crowdsourcing Social Media Tools Since we’re about to jump into 2010 (that’s “twenty ten,” everyone), I wanted to ring in the new year with something that will hopefully kick start your collaborative efforts. This is a guest post from Shevonne Polastre, who wrote this article on behalf of TopHost.Gr, a Greek web host that offers shared hosting. Crowdsourcing has become more and more popular with private companies, non-profit organizations, and even government agencies. It’s a model that is based on many people contributing to an idea, product, or service that would have usually been done by one person. Crowdsourcing has become increasingly more widely used because it helps cultivate creativity and innovation. There are three main reasons why this model works: Crowdsourcing builds competition – In an environment where one person is the one having the power to build something, mediocrity is usually the final result. Crowdsourcing is an useful model because it can be used by any group for any reason. Twitter Facebook Dropbox

It’s people! Meet Soylent, the crowdsourced copy editor The phrase “on-demand human computation” has a sinister tinge to it, if only because the idea of sucking the brain power out of a group of people is generally frowned upon. And yet, if you call it “crowdsourcing” everything sounds so much friendlier! But calling Soylent “crowdsourced copy-editing” isn’t quite fair, since the system performs the type of jobs that are somewhere in the gray area between man and machine. More than a spell check, not quite the nightside copy editor versed in AP style, Soylent really is on-demand computation. Soylent is an add-in for Microsoft Word that uses Mechanical Turk as a distributed copy-editing system to perform tasks like proofreading and text-shortening, as well as a type of specialized edits its developers call “The Human Macro.” For those unfamiliar, Mechanical Turk is an Amazon service that makes it easier for small tasks (and the money to pay for them) to be distributed among a group of humans called Turkers.