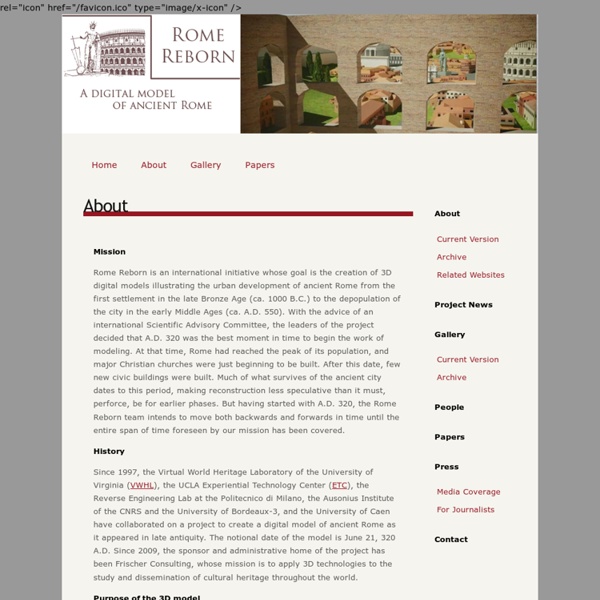 Mission Rome Reborn is an international initiative whose goal is the creation of 3D digital models illustrating the urban development of ancient Rome from the first settlement in the late Bronze Age (ca. 1000 B.C.) to the depopulation of the city in the early Middle Ages (ca. A.D. 550). With the advice of an international Scientific Advisory Committee, the leaders of the project decided that A.D. 320 was the best moment in time to begin the work of modeling. At that time, Rome had reached the peak of its population, and major Christian churches were just beginning to be built. After this date, few new civic buildings were built. History Purpose of the 3D model The primary purpose of this phase of the project was to spatialize and present information and theories about how the city looked at this moment in time, which was more or less the height of its development as the capital of the Roman Empire. Constituent parts of the model The name Version number Dissemination of Rome Reborn Licensing

History: Ancient Rome for Kids Back to History for Kids Ancient Rome was a powerful and important civilization that ruled much of Europe for nearly 1000 years. The culture of Ancient Rome was spread throughout Europe during its rule. As a result, Rome's culture still has an impact in the Western world today. The basis for much of Western culture comes from Ancient Rome, especially in areas such as government, engineering, architecture, language, and literature. The city of Rome is the capital of Italy today Map of Italy from the CIA World Factbook

CSI: Rome – The Assassination of Julius Caesar CSI: Rome – The Assassination of Julius Caesar Did Julius Caesar know he was going to be assassinated? Was there a single killer or were dozens of men involved? What were the reasons for the assassination? Food in Ancient Greece The Greek diet consisted of foods that were easily raised in the rocky terrain of Greece’s landscape. Breakfast was eaten just after sunrise and consisted of bread dipped in wine. Lunch was again bread dipped in wine along with some olives, figs, cheese or dried fish. Supper was the main meal of each day. It was eaten near sunset. It consisted of vegetables, fruit, fish, and possibly honey cakes.

Ancient Rome The Ancient Romans The Italian Peninsula was home to a people that would eventually rule most of the known world. The story of how this small village, which was named Rome, grew into the most powerful empire in the world is one of war, luck, and intrigue. Ancient Roman Court Case Reopened! Four defendants, four lawyers, 13 jurors, and one judge decides a 1700 year old Roman court case. Students played their roles perfectly. The case wasn’t simple. A slave went to the public square to get a shave from a barber. There were two people playing catch near by. One of the players didn’t catch the ball and it struck the barber.

Facts about Romans for Kids - Roman Britain Homework help The Romans came to Britain nearly 2000 years ago and changed our country. Even today, evidence of the Romans being here, can be seen in the ruins of Roman buildings, forts, roads, and baths can be found all over Britain. The Romans invaded other countries too.