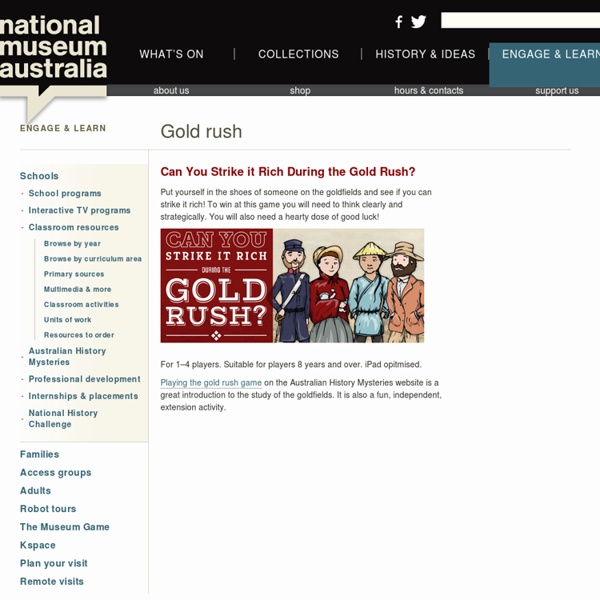 GoldRush Gold Rush in Australia! The transportation of convicts to Australia was phased out between 1840 and 1868. By 1860, the continent of Australia had been divided into FIVE separate colonies (not officially states yet, mate but seperation away from New South Wales), each not seeing eye-to-eye and exhibiting more loyalty to London to each other. A major force within the colonies was the “squatocracy” – the rich officers and settlers a.k.a. opportunists who had followed the explorers into fertile hinterlands. They simply laid claim to or “squatted” upon enormous tracts of land, often 20,000 acres and more. Gold was originally discovered in Australia by Rev. [NEXT: the birth of a new nation!

Australian gold rushes An Australian gold diggings circa 1855 After the California gold rush began in 1848, causing many people to leave Australia for California to look for gold there, the New South Wales government rethought its position, and sought approval from the Colonial Office in England to allow the exploitation of the mineral resources and also offered rewards for the finding of payable gold.[2] The first gold rush in Australia began in May 1851 after prospector Edward Hargraves claimed to have discovered payable gold near Bathurst, at a site he called Ophir.[3] Hargraves had been to the Californian goldfields and had learned new gold prospecting techniques such as panning and cradling. The Australian gold rushes changed the aboriginal view of Australia. When the rush began at Ballarat, diggers discovered it was a prosperous goldfield. The gold rushes caused a huge influx of people from overseas. The Chinese were particularly industrious, with techniques that differed widely from the Europeans. F.

Eureka! The rush for gold The gold rushes and the diggers who worked the goldfields are etched into Australian folklore. Follow the story of the people who sought the glittering prize. Edward Hammond Hargraves is credited with finding the first payable goldfields at Ophir, near Bathurst, New South Wales, on 12 February 1851. News of gold spread quickly around the world and in 1852 alone, 370,000 immigrants arrived in Australia. By 1871, the national population had trebled to 1.7 million. The Australian gold rushes transformed former convict colonies into modern cities with an influx of free emigrants in the latter half of the nineteenth century. While not all these diggers found riches on the goldfields, many chose to stay in the colonies and established themselves in the newly-prosperous cities. The camaraderie and 'mateship' that developed between diggers on the goldfields is still integral to how we perceive ourselves as Australians. Eureka!

Life on the Australian Goldfields On hearing that there was gold to be found, thousands of people left their homes and jobs and set off to the diggings to find their fortune. At the start of the gold rush, there were no roads to the goldfields, and no shops or houses there. People had to carry everything they needed. They travelled by horse or bullock, or by walking with a wheelbarrow loaded with possessions. At the diggings, the gullies were filled with claims, and so the higher ground nearby soon became huge campsites. There was violence on the goldfields. People came to Australia from all over the world. Fresh food at the diggings was limited, and the basic diet was mutton, damper (a bread made of flour, water and salt, cooked over an open fire) and tea. If you use any part of this in your own work, acknowledge this source in your bibliography like this: Sydenham, S. & Thomas, R.

Australian gold rush timeline, Discovering gold, Gold and mining, SOSE Year 6, SA | Online Education Home Schooling Skwirk Australia The first major mineral discovery - gold - was a watershed (a turning point or landmark) for Australian society. The initial stages of the gold rush were responsible for tremendous changes in the community, bringing Australia's first great waves of immigration from countries other than England and Ireland. Ambitious prospectors from Asia, Europe and America made the trek to the goldfields of Ballarat and Bendigo in Victoria, and Bathurst in New South Wales, in the hope of striking it rich. Government Surveyor James McBrien discovers traces of gold in the Fish River, east of Bathurst. Explorer and geologist Paul de Strzelecki discovers small amounts of gold in silicate near Hartley in the Blue Mountains. The 1840s Early gold discoveries were greeted with fear. William Campbell finds gold on his sheep run in Strathlodden, Victoria, in 1840. Clergyman and amateur geologist William Branwhite Clarke discovers traces of gold at Hassan's Wells, near Lithgow. The 1850s See image 1 The 1860s The 1870s

Ancient Australian History After a long trek on foot or horseback by coach or dray from Sydney or Melbourne, new miners were thankful and excited when they reached the goldfields. On the larger fields they saw hundreds or even thousands of tents clustered around creeks or near the site of earlier discoveries. There were horses and bullocks, wagons and carts and everywhere people bustling around, digging, panning, washing gravel, moving mounds of dirt or gently rocking their cradles from side to side. New miners soon realised, however, that the goldfields were not as attractive to live in as they looked from a distance. Miners worked hard day after day and often could afford neither the time nor the money to buy good food. The first diggers lived in tents which they brought with them to the goldfields. As well as diggers’ tents or huts, there were many other buildings on the goldfields. At first the government did not know quite what to do about the gold diggers.

Sydney Gold Rush Period Maps Related to New South Wales Sydney, Australia Sydney is the most populated city of Australia, and is the capital of New South Wales. It is also the site of the first British colony in Australia and is a huge natural harbor. It is one of the most beautiful and livable cities of the world and contains a rich and ethnically diverse population.About the City The city of Sydney covers an area of 12,144.6 sq km and had an approximate population of 4,627,345 in 2011. The area of the city was originally occupied by the indigenous Cadigal people of Australia. Geography Sydney is located on a coastal basin on the Tasman Sea and is bordered by the Blue Mountains in the West, the Hawkesbury River in the North and the Royal National Park to the South. Modes of Transport You can travel to Sydney in the following ways : The city is served by the Sydney Kingsford Smith International airport which is the busiest airport in Australia. The Sydney Festival is held in January to celebrate the arts.