Moving Around Without Losing Your Roots - Gianpiero Petriglieri 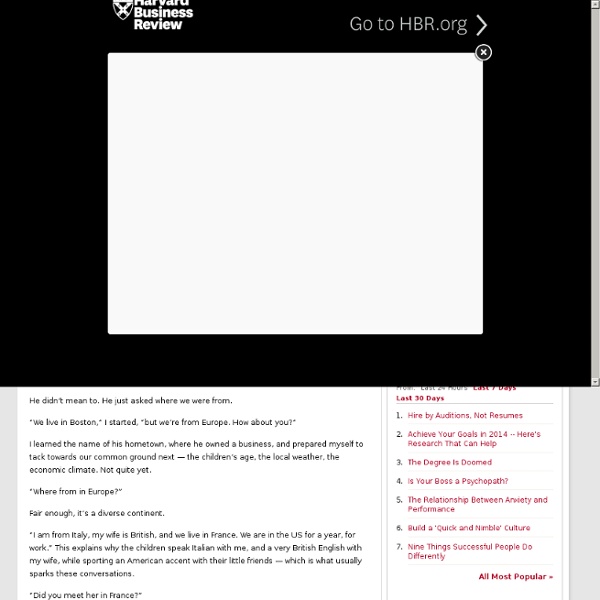 Big questions always strike unexpectedly, when our guard is down. I was watching my toddlers splash in the pool last summer when a fellow dad plunged me into revisiting the meaning of home in a globalized world. He didn’t mean to. He just asked where we were from. “We live in Boston,” I started, “but we’re from Europe. I learned the name of his hometown, where he owned a business, and prepared myself to tack towards our common ground next — the children’s age, the local weather, the economic climate. “Where from in Europe?” Fair enough, it’s a diverse continent. “I am from Italy, my wife is British, and we live in France. “Did you meet her in France?” I felt the impulse to lie and get it over with. “We met in Switzerland when I worked there.” I didn’t just hail from a different place. Those conversations always make me pause. For many years now, I have spent my days in circles where careers and families like mine are the norm. I think of them as a peculiar tribe. Related:  LIFE • Life

ADHD medication changes my boyfriend's personality. Photo by JEAN-CHRISTOPHE VERHAEGEN/AFP/Getty Images I understand the chill that Ted Gup felt when he learned that 6.4 million school-age children in America have been diagnosed with attention deficit hyperactivity disorder. I have no children myself, so I cannot speak to the pain Gup describes in writing about his son’s early diagnosis and drug overdose in college, but I know what the effects of ADHD medication look like in someone you love. As the longtime girlfriend of a man who has the disorder, I am accustomed to the difference between two versions of Hunter: his medicated and unmedicated selves. Though concern is rising that the rapidly increasing number of ADHD diagnoses means more children are being misdiagnosed, Hunter does not fall into that category. A simple Google search reveals several forums where both people with the disorder and parents of children who have it voice concerns about the way the treatment affects personality.

New Research on Working Parenthood: Men Are More Egalitarian, Women are More Realistic - Stew Friedman by Stew Friedman | 9:41 AM October 4, 2012 In the few days since Marissa Mayer’s baby arrived, I’ve watched the resurgence — again — of the debate about working parenthood, maternity leaves, and even “baby bumps.” I have mixed feelings about this. Mayer’s situation is extremely unusual. And yet, that the board agreed to hire a pregnant Mayer as CEO was a sign of real progress in our collective grasp of what’s possible, for men and for women. We’re going to see more new possibilities, if my research on Wharton students (part of the Wharton Work/Life Integration Project) is any indication. Two-career relationships work best when one partner is more advanced than the other.Two-career relationships work best when one partner is less involved in his/her career. In 1992, men were much more likely to agree with both these statements than were women. Our survey also asked men and women to indicate how strongly they agree with these statements: Marissa Mayer is just one very fortunate person.

The underground world of neuroenhancing drugs A young man I’ll call Alex recently graduated from Harvard. As a history major, Alex wrote about a dozen papers a semester. He also ran a student organization, for which he often worked more than forty hours a week; when he wasn’t on the job, he had classes. Weeknights were devoted to all the schoolwork that he couldn’t finish during the day, and weekend nights were spent drinking with friends and going to dance parties. Adderall, a stimulant composed of mixed amphetamine salts, is commonly prescribed for children and adults who have been given a diagnosis of attention-deficit hyperactivity disorder. Alex recalled one week during his junior year when he had four term papers due. I met Alex one evening last summer, at an appealingly scruffy bar in the New England city where he lives. After we had ordered beers, he said, “One of the most impressive features of being a student is how aware you are of a twenty-four-hour work cycle. “Yes,” Zack said. In person, he was more obliging.

The Silent Club Tonight I spent a lovely few hours with the Wired 2012 team in a conference eve drinks jolly arranged to prepare us all for their annual extravaganza – with champagne. It was very lovely but I was quite exhausted when I arrived and left after less time than I had anticipated. This left me with an hour or so of *free time* and a choice. I could either go straight home, or find some people to play with. It being 8pm when I made the decision to leave, everyone I knew was pretty much sorted with their evenings and I was not in the mood to gatecrash. I went to Carluccios on Waterloo station. Whilst watching the people scurrying about the station, me on a usual day, I thought – the Silent Club, that is what we need – a club for people who need peace from networking, busy people who just really need some time out but perhaps an excuse to do so. I started thinking about what this might take. We need a website: no we don’t it is a solitary thing something only we need enjoy individually 1. 2. 3.

Frugality rules at German dinner parties 18 November 2012Last updated at 01:12 GMT By Stephen Evans BBC News, Berlin There has been much talk in Germany about southern European nations being over-reliant on the country's generosity but when it comes to entertaining, the Germans display quite an appetite for frugality. When I first came to live in Berlin, I was invited to a dinner party, a media dinner party. A German director and his wife invited me over and I looked forward to it with great anticipation. Usually dinner parties are not my cup of tea, as it were, but this would be a chance to see how Germans did these things. And it was good, very enjoyable - though not nearly as grand a meal as I had anticipated. The table was laid in the couple's flat. Continue reading the main story "My first banana" And then his wife proudly produced the food - boiled potatoes, boiled green vegetables and ham, boiled ham. Now I like boiled potatoes, boiled ham, boiled vegetables even. Germans really are frugal. No, this was just German frugality.

Pay Yourself First Research, workout, or write down your thoughts each morning. Don’t check email, as that’s paying someone else. Email, while a dominant form of business communication isn’t effective: The more you respond, the more emails you’ll receive. I pay myself first. This isn’t a new concept, as many financial advisers will suggest that you invest in your future (funds, roth, 401) before fully paying down your debt. Imagine if everyone around us (colleagues, partners, vendors, family) was a little less reactive, and instead invested a bit more growing themselves, perhaps we’d all be better off. So there you go, resist the instinct to dive into email each morning, instead pay yourself by reading, investing in your wellbeing, or sharing your insights with others. Ergo, pay yourself first each morning, don’t check email, as that’s paying someone else.

Straight Man Has A Queer Year, Goes Back To Real Life With A Book Deal You know what my least favorite part of Coming Out Day is? The straight people who appropriate it. And never has that feeling flared up so strongly as yesterday when ABC News published an article about Timothy Kurek, a 26-year-old straight Christian man who lived for a year as a gay in order to understand the gay plight. Kurek grew up as a religious Christian in Nashville, where he was told that homosexuality is a sin by his church. But it seems this thought was more of a hypothesis that needed testing. For the sake of this espionage mission, Kurek “came out” to everyone in his life except for his aunt and two friends, one of whom pretended to be his boyfriend for the year, so that he could have an excuse not to actually have gay sexual experiences. This safety net was made up of people who supported the experiment, and who applauded his efforts; witnesses to his brave self-sacrifice. via abc news Safety net aside, is it even possible to experience being gay without actually being gay?