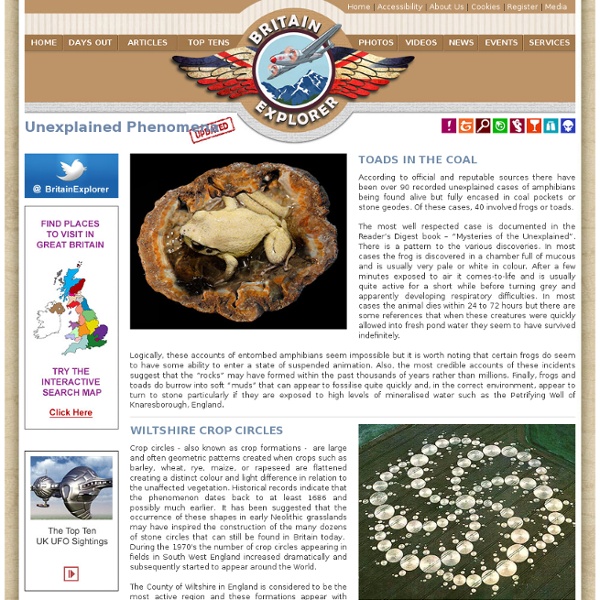 Over the past decades the designs have become increasingly complex and still remain a mystery as to their origin. Clearly some of the formations are man-made but experts are quick to point out that it is fairly easy to identify these as their construction is often very basic and there is usually evidence of human activity ranging from footprints to vehicle tracks. However, a great many of the formations simply seem to appear as if from out of nowhere - often during the night but occasionally during broad daylight. Crop circles in Wiltshire often appear at the centre of the county and within a 15 mile radius of the megalithic stone circles of Avebury. They tend to materialise from late April and continue to manifest throughout the summer months of June, July and August. Mainstream science is generally of the opinion that crop formations are the work of human artists with a few formations being caused by whirlwinds. Related:  Mysteries

Girl Who Does Not Age, Brooke Greenberg Baffles Doctors <br/><a href=" US News</a> | <a href=" Business News</a> Copy Brooke Greenberg is the size of an infant, with the mental capacity of a toddler. She turned 16 in January. "Why doesn't she age?" Howard Greenberg, 52, asked of his daughter. Such questions are why scientists are fascinated by Brooke. Girl Who Doesn't Grow Baffles Doctors "Many of the best-known names in medicine, in their experience ... had not seen anyone who matched up to Brooke," Pakula said. Brooke hasn't aged in the conventional sense. null In a recent paper for the journal "Mechanisms of Ageing and Development," Walker and his co-authors, who include Pakula and All Children's Hospital (St. "There've been very minimal changes in Brooke's brain," Walker said. Brooke's mother, Melanie Greenberg, 48, sees a different picture. "My system always has been to turn years into months," Greenberg said. Brooke weighs 16 pounds and is 30 inches tall.

Global Warming - Research Questions by Topic - Environmental Issues - LibGuides at Fort Lewis College Using the correct words to search will help you find relevant information. Use your research questions to help you create a list of key words to use in your searches for information. Because different authors and search tools use different words to describe the same concepts, it's useful to have a list of similar and related terms in your arsenal when you set out to search for relevant information. The process of creating these alternative terms is called brainstorming terms or concept mapping. The University of Illinois Undergraduate Library illustrates this process well in their brief video called, Developing Your Topic with a Concept Map. Keywords for Researching: BioclimaticClimatic ChangesEcological Global WarmingGreenhouse EffectGreenhouse GasesOzone Layer Depletion Renewable Energy Sources

10 Bizarre Theories And The Facts Surrounding Them Weird Stuff Previously we posted a list on conspiracy theories, but the items on this list are not really suited to that genre. This is a list of bizarre theories or beliefs that many people subscribe to – with a list of the facts as far as modern science is concerned. This is not meant as a criticism of believers, but as a discussion of the theories and facts. The Theory: The theory is by using certain objects such as a candle, a dagger and a wide variety of things you can bend the universe to your will completely ignoring the laws of physics and the practical laws of the universe. The facts: Many people claim that they can use such powers as summoning demons, angels or other things and the OOBE or out of body experience under laboratory conditions but no one has been able to prove it so far. The Theory: This has to be one of the most outlandish theories ever brought forth, it is claimed most famously by David Icke but as well by several others. Contributor: Beranabus, Editor: Cyn

Cuisine and cookery in Santiago de Compostela. spain.info in English There are a number of places in Santiago de Compostela where you can spend an evening in the most authentic Galician style: against a background of live music, you can take part in the ritual preparation of the typical local brew known as queimada. The aguardiente (a kind of brandy) is set alight in an earthenware bowl while a spell is recited to ward off evil spirits. For a more detailed insight into the local cuisine, sign up for a guided tour of traditional shops (along typical streets such as Orfas and Caldeirería), where you’ll be invited to taste the local produce and learn Atlantic recipes. Other things to do: a full-day outing from Santiago to discover the flavours of the Rías Baixas, or if you're visiting in June and July, you can attend the city's tapas competition. It’s easy to get chatting to people at the local market.

Tanganyika laughter epidemic The Tanganyika laughter epidemic of 1962 was an outbreak of mass hysteria – or mass psychogenic illness (MPI) – rumored to have occurred in or near the village of Kashasha on the western coast of Lake Victoria in the modern nation of Tanzania (formerly Tanganyika) near the border of Kenya.[1] The laughter epidemic began on January 30, 1962, at a mission-run boarding school for girls in Kashasha. The laughter started with three girls and spread haphazardly throughout the school, affecting 95 of the 159 pupils, aged 12–18.[2][3] Symptoms lasted from a few hours to 16 days in those affected. The teaching staff were not affected but reported that students were unable to concentrate on their lessons. The school was forced to close down on March 18, 1962.[4] The school from which the epidemic sprang was sued; the children and parents transmitted it to the surrounding area. See also[edit] References[edit] Jump up ^ Jeffries, Stuart (November 21, 2007). External links[edit]

10 More Mysterious Conspiracy Theories - StumbleUpon Mysteries To date we have around seven conspiracy theory lists or lists containing entries related to such. This new list is a welcome addition as it has been some time since our last one and they are always extremely fascinating topics to read about. The world is full of conspiracy theories – many of which contain elements of mystery. This will definitely not be the last list of this type. Theories surrounding the Ararat Anomaly arose from a single black and white photograph taken in 1949 by a USAF recon plane performing routine intelligence gathering of the Ararat massif, which was in an area of military interest at the time. Conspiracy theorists, many of them Biblical literalists, claim that the odd-looking object if Noah’s Ark, which the Bible states “came to rest on the mountains of Ararat” after the Great Flood. The anomaly appears to be a very rounded elongation teetering on the edge of a slope, buried under ice and snow, and it has so roused the curiosity of the U.