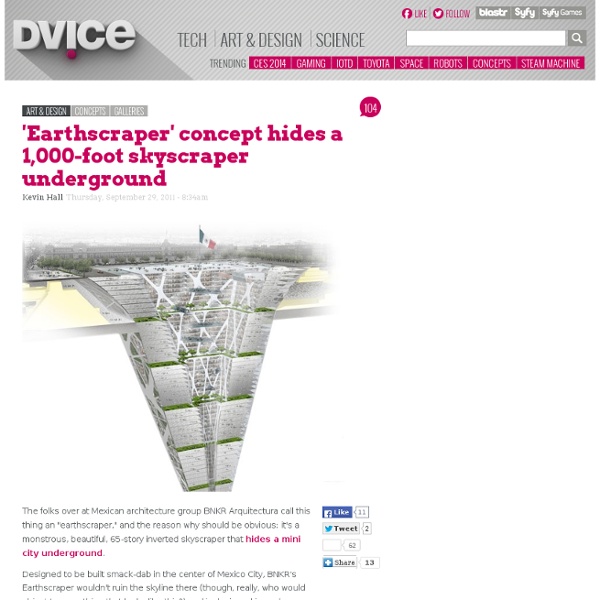 The folks over at Mexican architecture group BNKR Arquitectura call this thing an "earthscraper," and the reason why should be obvious: it's a monstrous, beautiful, 65-story inverted skyscraper that hides a mini city underground. Designed to be built smack-dab in the center of Mexico City, BNKR's Earthscraper wouldn't ruin the skyline there (though, really, who would object to something that looks like this?) and is designed in such a way that it would incorporate Mexico's history in its design. Our favorite detail: the interior of the structure is actually hollowed out, and there are bridges that extend out into the center of it so you can look down. We've got plenty more for you down in the gallery below, but this gorgeous cross-section deserves its own spot, and will let you see how the structure breaks down by the floor: Click to enlarge BNKR Arquitectura, via ArchDaily, via Humans Invent Related:  HSH724 - Healthy Cities

The Top 10 Psychology Studies of 2010 | Psychology Today - StumbleUpon The end of 2010 fast approaches, and I'm thrilled to have been asked by the editors of Psychology Today to write about the Top 10 psychology studies of the year. I've focused on studies that I personally feel stand out, not only as examples of great science, but even more importantly, as examples of how the science of psychology can improve our lives. Each study has a clear "take home" message, offering the reader an insight or a simple strategy they can use to reach their goals , strengthen their relationships, make better decisions, or become happier. If you extract the wisdom from these ten studies and apply them in your own life, 2011 just might be a very good year. 1) How to Break Bad Habits If you are trying to stop smoking , swearing, or chewing your nails, you have probably tried the strategy of distracting yourself - taking your mind off whatever it is you are trying not to do - to break the habit. J. 2) How to Make Everything Seem Easier J. 3) How To Manage Your Time Better M. J.

Texcoco Lake Ecological Park: Mexico City to Build the World's Largest Urban Park Echeverria hopes that the area of the central Mexico City valley once covered by Lake Texcoco can be reclaimed to create a new urban landscape that combines nature with infrastructure. The area of the planned park was historically covered by Lake Texcoco and other small bodies of water. In fact, the Texcoco region has been engineered by humans for centuries as dikes and canals were built to channel Mexico City’s water and lakes as early as the 1400s under Aztec Emperor Montezuma. In keeping with these goals, the urban engineering project proposed by Echeverria and his team draws upon a long history of landscape engineering in Mexico City. Also noteworthy is that one of the unique environmentally-friendly aspects of the plan is its waterscape. + Iñaki Echeverria

Beach House Q / Longhi Architects Architects: Longhi Architects / Luis Longhi Location: Lima, Peru Project Year: 2010 Project Area: 404 sqm Photographs: Juan Solano / CHOlon Photography Infinite rolling dunes from the desert to the East and rocky Pacific Ocean cliffs used by fishermen to the West converge on the site of Casa Q, creating a unique natural environment. Casa Q is the first residence built in one of the areas not yet occupied at the Beach Club Misterio, located 117 kilometers south of Lima, Peru. Challenging the stillness of the surroundings, Casa Q materializes the dreams of a young couple in a “floating volume” which embodies the spaces for a future family. The volume is supported by circular columns placed by intuition, as a dance, instead of forcibly in a grid. The rest of the house – guest rooms, kitchen and services – are tastefully secluded at the back of the sloped site thus providing visual contrast with a volume of water in the front which has been unearthed for the enjoyment of swimming.

How To Use a Compass - when you have no compass.... - StumbleUpon Kjetil Kjernsmo's illustrated guide on Finding the directions without a compass You are lost. I mean really lost. Further thoughts about extreme survival skills is beyond the scope of this page, seek advice elsewhere beyond this introduction. This page is mainly about the northern hemisphere of the earth, actually north of 23.5 °, because I have never been to the southern hemisphere myself (would like to go there of course!). For a start, it may be a good idea to climb a hill, and get a good look around. Let us start with the most accurate method. In the morning, at least before noon, the trick starts. Now, the line from the first stick to the second is west-east, like on the figure. There is a short, fast version of this one as well. In the northern hemisphere, there is a star that is almost exactly in the north at all times, the Polaris. In the southern hemisphere, you would have to find the Southern Cross. If you have an analog wrist watch, you can use the time to find north.

The cities we need | Grattan Institute The cities we need by Jane-Frances Kelly The most important characteristic of a city is whether it meets the needs of its residents, both material and psychological. The report does not propose a set of solutions or prescriptions. Download Report Fifteen Visually Stunning Architectural Delights Fifteen Visually Stunning Architectural Delights Those who stay in apartments crave for spacious bungalows and those who live in landscaped acres dread the maintenance! So what really is the ideal size for a home? The multi-storey high-rises offer many titillating features and let’s not even get into their crazy architectural style. Offices, museums, theaters even live gardens in the middle of the 100th floor; we can expect all of this from modern architects. Till you find your ideal space to call home, office, whatever….here’s a recap of Fifteen Visually Stunning Architectural Delights for the future! NOAH proposes to be a habitat for 40,000 residents who can benefit from the planned residential units, school system, commercial, retail, hotels, casinos, parking, and public works facilities. 14) Eko by 10 Raisons Architects Critics may pan it for getting inspired by the romantic Eiffel Tower, but the giant Eko looks like a tower with webs on the side. 9) Dancing Towers by Zaha Hadid

Alexander McQueen S/S 2012 | sheisimpeccable - StumbleUpon {Via Fashion Gone Rogue} Sarah Burton is every bit the engineer as her late mentor. It has become quite clear with every effort Burton has exhibited that there could have been no one better to replace McQueen than her. For the Spring, Burton channeled the Black Swan in all its darkness and raw emotion. Burton has an inexplicably supernatural bond to her late mentor which no one could understand. Nor, it seems, does she want anyone to. About these ads Like this: Like Loading...

It's Werribee but not as you know it - high-tech city for 100,000 proposed Fountains and boulevards are part of the plans. In one aspect it would be like nothing Melbourne has seen before: a shining city of 100,000 people, housed in soaring 50-level skyscrapers, employed in high-tech industries, and learning from the world's top universities. But in another aspect – a lack of public transport to get there – it would be a quintessential major Melbourne residential project. Welcome to Australian Education City, a plan for Melbourne's west that has emerged as one of the bidders for 775 hectares of paddocks and old research laboratories outside Werribee that the Andrews government is selling. An imagined aerial view of the precinct. The consortium behind the plan, Investors Direct, is one of five bidders to have lodged expressions of interest in the project. Investors Direct is remaining tight-lipped about plans for the 1.5 million-square-metre city it wants to build on the site. An imagined aerial view of the precinct. Map Data Map