I Am Malala: The Story of the Girl Who Stood Up for Education and Was Shot by the Taliban by Malala Yousafzai 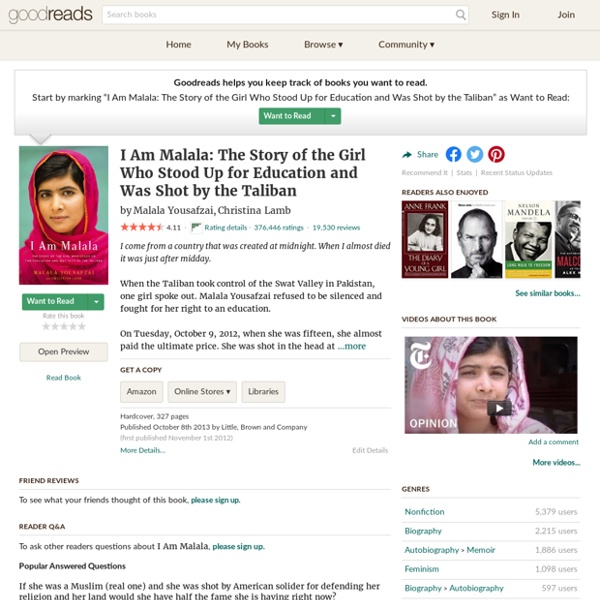 James and the Giant Peach by Roald Dahl First published in 1961, James and the Giant Peach remains a favorite for young readers decades later. In it, young James Henry Trotter loses his parents and is forced to live with his evil aunts. Luckily, he is given magic crystals, which he accidentally spills on his aunts' decrepit peach tree. One of the peaches begins to grow, and grow, and grow. Finally, James climbs into the peach and it rolls away from his aunts' yard and his miserably lonely life. With the giant peach, he begins a new life, making friends along the way with hilarious characters like the Grasshopper and the Earthworm. Dahl's use of rich imagery and amusing characters brings this outrageously imaginative tale alive. Ghost by Jason Reynolds, Hardcover | Barnes & Noble® Ghost CHECK THIS OUT. This dude named Andrew Dahl holds the world record for blowing up the most balloons . . . with his nose. “Let me guess, sunflower seeds,” Mr. “Lemme guess, one dollar.” After that, I continue on my slow-motion journey, pausing again only when I get to the bus stop. About the sunflower seeds. My dad used to eat sunflower seeds too. But let me tell you, my dad was lying. It was three years ago when my dad lost it. “We gotta go,” she said, yanking the covers off the bed. Next thing I knew, she was dragging me down the hallway, my feet tripping over themselves. “Don’t make me do this, Terri!” My mom and I kept running, down the staircase into the street, breaking into the darkness with death chasing behind us. I haven’t seen my dad since.

Characteristics of Quality Multicultural Literature It's not on the list: An exploration of teachers' perspectives on using multicultural literature. By: Stallworth, B. Joyce; Gibbons, Louel; Fauber, Leigh. Journal of Adolescent & Adult Literacy, Mar2006, Vol. 49 Issue 6, p478-489, 12p. (Journal Article) Guiding principles for teaching multicultural literature. The Watsons Go to Birmingham-1963 by Christopher Paul Curtis Description Enter the world of ten-year-old Kenny and his family, the Weird Watsons of Flint, Michigan. When Momma and Dad decide it's time for a visit to Grandma, Dad comes home with the amazing Ultra-Glide, and the Watsons head South to Birmingham, Alabama...toward one of the darkest moments in America's history.A hilarious, touching, and tragic novel about civil rights and the impact of violence on one African American family.Praise for The Watsons Go to Birmingham - 1963"Written in a full-throated, hearty voice, this is a perfectly described piece of past imperfect. Curtis's ability to switch from fun and funky to pinpoint-accurate psychological imagery works unusually well. Although the horrific Birmingham Sunday throws Kenny into temporary withdrawl, this story is really about the strength of family love and endurance.

How to Choose the Best Multicultural Books | Scholastic How do you know if a children's book you're about to share with your students accurately portrays the culture of its characters? Are there warning signs to look for? Are there telltale things that mark an outstanding multicultural book? To answer these questions, Scholastic Teacher magazine invited five children's literature specialists to give us their candid advice on selecting books about or related to Native Americans, Latinos, African Americans, Jews, and Asian Americans. Within each section of this article, you'll find: Reviews of ten great children's books suitable for grades K–8Essential advice from a children's author or illustrator: Joseph Bruchac, Gary Soto, Floyd Cooper, Patricia Polacco, Yumi HeoKey criteria to use when selecting booksA list of notable authorsAnd more! Our experts also helped us compile an extensive list of other multicultural resources for teachers and their classrooms. Native Americans: Let Our Words Be Heard By Peggy K. 10 Great Children's Books Keep in Mind

How Cultural Differences Influence Adolescent Development The parents of adolescents have the main responsibility of teaching children ethics. Scholars of adolescent behavior and authors of "Family and Peer Influences on Adolescent Behavior and Risk-Taking," Nancy Gonzales and Kenneth Dodge, note that while much of adolescent development happens outside the home, the culture of the family instills upon children their developmental roots. Parents coming from difference cultures emphasize different value sets and therefore teach their children different moral standards. For example, because honesty is an important concept in the West, American parents urge their children not to lie, even in situations where lying would be beneficial. On the contrary, parents from East Asia tend to focus on creating a sense of both social and family harmony. These parents are more willing to overlook lies, provided those lies contribute to harmony, such as in white lies that avoid hurting others' feelings.

Multicultural Fiction for Teenagers | Madison Public Library The Absolutely True Diary of a Part-Time Indian by Sherman Alexie. 2007Budding cartoonist Junior leaves his troubled school on the Spokane Indian Reservation to attend an all-white farm town school where the only other Indian is the school mascot. American Born Chinese by Gene Luen Yang. 2006Alternates three interrelated stories about the problems of young Chinese Americans trying to participate in the popular culture. Presented in comic book format. The Astonishing Life of Octavian Nothing, Traitor to the Nation. Vol. Bamboo People by Mitali Perkins. 2010Two Burmese boys, one a Karenni refugee and the other the son of an imprisoned Burmese doctor, meet in the jungle and in order to survive they must learn to trust each other. Before We Were Free by Julia Alvarez. 2002In the early 1960s in the Dominican Republic, twelve-year-old Anita learns that her family is involved in the underground movement to end the bloody rule of the dictator, General Trujillo. Down to the Bone by Mayra L.

Book Award Winners : Tomás Rivera Book Award : Texas State University Click the image above for more information about the book and author Works for Older Readers: Out of Darkness by Ashley Hope Pérez. Carolrhoda LAB Pérez’s historical fiction explores the devastating consequences of racism in the context of the worst school disaster in U.S. history. Why Teach Multicultural Literature? | The Huffington Post iStockphoto.com I have taught literature at the college level for almost a decade and at as many as six different campuses. These have mainly been classes that were focused on non-western writing. Why teach U.S. students literature from different countries? Here is the video that set this off, followed by the student’s letter and my response: About the Adichie talk at the TED conference. The problem with these kinds of conversations is that you have to be really careful about how ideas are presented and in particular how things are worded. In my opinion, Adichie perfectly typifies what you could call the ugly side of multiculturalism. Any time we start talking about the “dominant” culture, unless you are very careful and explicit about your terms, it starts to become clear that what is being talked about is white culture. I would have been fine if Adichie kept her discussion to the concept that diversity is good and how lack of it can lead to stereotyping and in the worst case racism.