The Cube Game - Find Out The True Nature Of People 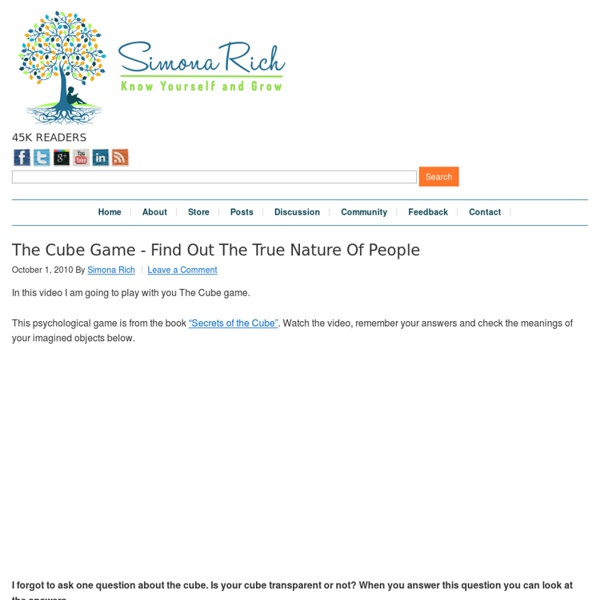 In this video I am going to play with you The Cube game. This psychological game is from the book “Secrets of the Cube” . Watch the video, remember your answers and check the meanings of your imagined objects below. I forgot to ask one question about the cube. The Cube game answers: The Cube The first object in the desert, the cube, represents you. The bigger the cube, the bigger your ego. If the cube is made out of something solid and strong, it means that you are a strong person. How you think about the cube represents how you think about yourself. If the cube is in the centre it means that you like the attention and you like to be praised. The color of the cube represents your personality. Here is a general guide to the cube colors: Black is the color of authority, elegance, sophistication. White symbolizes innocence, non-judgemental personality, objectivity, lack of strong opinions. Red is the color of dominance, power, love and sexual energy. Brown shows stability. The Ladder The Horse Related:  Holistic Living • music

The Magic Formula for Expressing Hurt Feelings If we could all just be more emotionally honest with ourselves and others, the world would be a much different place. Sounds easy, right? Then why is it so hard?!? Well, being straightforward about your feelings is a challenge when you grow up in a culture that polarizes emotions as out to get you and paints them as the take-down of your logical, rational mind (which is an irrational fear). But no matter how dysfunctional your cultural programming is, you can still reprogram your beliefs about emotions and their role in your life. This formula is good for you You’ve probably already learned from elementary school about the easy way to express your feelings without putting anyone else on the defensive in a mean way. It’s a magic formula helps you put your feelings back into perspective by reminding you that: The formula is: I feel this when you do that. Or, for when you need to try extra hard to get the other person’s attention: When you do that, I feel this. Change the world with magic ShareThis

www.cfcl.com/vlb/Cuute/f/quiz.txt Three-minute timed test. 1. Read everything before doing anything. 2. Put your name in the upper left-hand corner of this paper. 3. Decision Maker How to use The grid lets you enter options (things you'll choose between) in columns. Just click the "add option" button, and enter the name of each option. Then you need to enter criteria that you want to rate your options on, like price, quality, frequency etc. Click the "add criteria" button and name your criteria. Each criterion needs a weight (from 1 to 10), which indicates how important it is relative to the other criteria. Example See this example » Written by Ben Hunt

Stephen Hawking: "Humans Have Entered a New Stage of Evolution" Although It has taken homo sapiens several million years to evolve from the apes, the useful information in our DNA, has probably changed by only a few million bits. So the rate of biological evolution in humans, Stephen Hawking points out in his Life in the Universe lecture, is about a bit a year. "By contrast," Hawking says, "there are about 50,000 new books published in the English language each year, containing of the order of a hundred billion bits of information. Of course, the great majority of this information is garbage, and no use to any form of life. But, even so, the rate at which useful information can be added is millions, if not billions, higher than with DNA." This means Hawking says that we have entered a new phase of evolution. But what distinguishes us from our cave man ancestors is the knowledge that we have accumulated over the last ten thousand years, and particularly, Hawking points out, over the last three hundred. Casey Kazan Related Galaxy posts: Immense Journey

Best Quotes of All Time It’s been three years since we shared our original list of some of the best quotes of all time, and we felt it was a good time for an update. We’ve added another 25 quotes for you. But these aren’t just any quotes. These are quotes designed to inspire. They’re motivational quotes that will hopefully get you thinking about your life, your work, or your dreams and how you can make these things better. I know quotes researched online often come in slightly different variations, so if you’ve heard another version of one of these, please share it with us in the comments. Here are our 25 new additions for our list of the best quotes of all time, including some submitted by our readers in response to the original list of best quotes, which you can still find below. “Too many of us are not living our dreams because we are living our fears.” – Les Brown “A goal is a dream with a deadline.” – Napoleon Hill “The road to success and the road to failure are almost exactly the same.” – Colin R. – Buddha

Be True To Yourself To be true to yourself means to act in accordance with who you are and what you believe. If you know and love yourself you will find it effortless to be true to yourself. Just as you cannot love anyone else until you love yours elf, you cannot be true to anyone else until you are true to yourself. Be who you are! Many young people believe that when they do things to please their peers, such as drink when they shouldn't, or behave and party in inappropriate ways, they will be popular and liked. When you do things that are not genuine or a reflection of the real you, you will not be happy with yourself and will end up confused. Self-respect comes from being true to who you really are and from acting in accordance with your fundamental nature. When you respect yourself, others will respect you. When you are true to yourself, you allow your individuality and uniqueness to shine through. To be true to yourself takes courage. Related articles: <div class="statcounter"> &nbsp; </div>

Scales and emotions See also a post about making chords from scales. So maybe you want to write a song or an instrumental in a particular mood or style, and you’re feeling overwhelmed by all the scales. Here’s a handy guide to the commonly used scales in Western pop, rock, jazz, blues and so on. Click each image to play the scale right in your browser with the aQWERTYon. These scales have a major third (E in the key of C), which makes them feel happy or bright. Major scale Happy; can be majestic or sentimental when slow. Mixolydian mode Bluesy, rock; can also be exotic/modal. Lydian mode Ethereal, dreamy, futuristic. Lydian dominant mode Also known as the overtone scale or acoustic scale, because it is close to the first seven pitches in the natural overtone series. Phrygian dominant mode Exotic, Middle Eastern, Jewish. Harmonic major scale Majestic, mysterious. These scales have a flat third (E-flat in the key of C), which gives them a darker and more tragic feel. Natural minor scale (Aeolian mode) Dorian mode

How to Explore and Study Intention: 10 steps Edit Article Edited by George AP, Teresa, Flickety, Daniel and 10 others Intention is a surprisingly important, but rarely explored part of the mind, as its significance is only important after the fact. Only once you've spent time observing it can you find just how it fits in to day-to-day living. Ad Steps 1Find out the ways you can best view intention as it happens. 10Continue to evaluate intention. Tips Consider studying how intention is treated within different disciplines in order to broaden your understanding of it. Warnings Take things a step at a time, this is understanding a major part of how the mind works and reacts. Harmonic Progressions | Learning and Loving Music Theory Kelvin, You actually caught a mistake on the roman numerals! Thanks, I’ll have to fix that. The first and last chords of the progression are not 7th chords. In the classical tradition, for the sake of stability, the first and last chords of a circle-of-fifths progression are usually triads, not 7th chords. Harmonic Sequences Part 2 In the jazz tradition all chords usually are 7ths, in which case the progression will start and end with 7th chords. Thanks again for your interest and input.